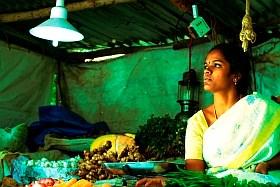 Harish Hande, Founder of Bangalore-based Solar Electric Light Company (SELCO) emphasizes that women do not only make good business sense as end-consumers but also as professionals within a company and as those driving business, regardless of size. SELCO’s Vice President and Chief Financial Officer, for instance, is a women. As distributors of different sustainable energy packages, SELCO has found that self-help groups (SHGs), which are made up of women, have often used the packages in the most efficient way. More specifically, some women have established micro-solar enterprises, which allows them to charge up to 30 batteries at a time and then distribute them to street vendors, who use the batteries to power their stalls.

BANGALORE, Sep 15, 2011 (IPS) – Harish Hande believes that involving women in design, manufacture and sales pays dividends in any business, but especially in those making products that women ultimately use.

Hande’s Bangalore-based Solar Electric Light Company (SELCO), which started up in 1995 by innovating sustainable and affordable solar lighting products for India’s rural poor, has a woman occupying the key slot of vice-president and chief financial officer.

“Why should the business sector look at women only as end-users?” asks Hande, who bagged the 2011 Ramon Magsaysay award, also known as Asia’s Nobel prize.

The citation said the award was for “passionate and pragmatic efforts to put solar power technology in the hands of the poor, through a social enterprise that brings customised, affordable, and sustainable electricity to India’s vast rural populace, encouraging the poor to become asset creators.”

Hande points to the women professionals in his company as illustration of his belief, something that SELCO’s vice president and chief financial officer, K. Revathi endorses.

“I am given full freedom here to bring changes into conventional financing processes,” says Revathi, a chartered accountant.

Managing SELCO’s finances for over eight years, Revathi saw the company through a downturn in 2004-05, when a spike in photovoltaic costs reduced demand, and back up to a respectable turnover of 2.93 million dollars in 2009-10.

Revathi says her involvement in the financial side of designing products, a key component of SELCO’s success, has been satisfying.

Nearly a fourth of India’s 1.1 billion people have no access to the national power grid and, in spite of efforts to connect all of India’s 23.4 million below-poverty-line individuals, only 6.9 million had connections by 2009.

In many rural electrified areas, grid connections are unreliable, causing difficulties to even those who can afford to pay.

Hande persuaded rural-based banks to provide loans to poor families excluded because of their inability to provide collateral.

With SELCO providing the 15 percent down payment, the banks responded with loans of 300-500 dollars to each family for packages with varied energy needs.

Fewer than 10 percent of borrowers have defaulted on loan repayments among SELCO’s current clientele of over 125,000 families in the southern states of Karnataka and Andhra Pradesh and western Gujarat.

A typical rural family uses around 120 litres of kerosene annually for lighting, so SELCO’s systems save not just kerosene but around 22,000 tonnes of carbon emissions annually.

“To date, SELCO has reached more than half-a-million people by installing solar lights in 120,000 households, microenterprises, and community facilities,” the Magsaysay citation said.

Homes benefit from emission-free lighting, children are able to study at night and domestic tasks become easier, increasing time and opportunities for income generation, especially for women. “It’s a misconception that the poor cannot pay,” Hande told IPS. “What they need is a product that suits them and their paying capacities.”

Women’s self-help groups (SHGs) have made the best use of SELCO’s equipment and expertise, especially in small businesses involving solar power and cooking stoves.

The batteries are dispatched in the evening to street vendors, many of them women, who use them to power SELCO solar lights in their stalls.

Pavanben says she regularly collects instalment amounts from her customers and pays SEWA back.

“I can never think of double-digit margins but we are sustainable. We just function on a slower scale,” says Revathi.

Steady whilst others have gone bust, Hande illustrates his case by pointing to the giant investment banking firm Lehmann Brothers, which collapsed in 2008.

“We both started in the same year; they’re gone, we’re still here,” says Hande with a grin.

SELCO received 2.5 million dollars as a loan from the World Bank’s International Finance Corporation – which does not give grants.

“One million dollars were raised as debt and the grant component of the whole was just 200,000 dollars. We have only 250,000 dollars now remaining of our debt, which we will pay back in two years,” explained Hande to IPS.

SELCO’s business model is already a case study at Harvard University in the United States, and Yale University is about to follow suit.