Transforming Lives For The Better 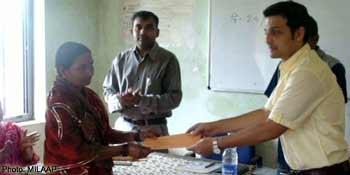 In this article, Milaap Social Ventures, an online social microlending platform for the poor in India is profiled. Milaap enables the general public to provide microloans to clients and focuses on channelling the low-interest loans towards sanitation and education services and market linkage initiatives. To date, Milaap has raised $170,000 for borrowers in Karnataka, Tamil Nadu, and Maharashtra.

INDIA – Many of India’s poor rely on the largesse of the wealthy for basic needs such as potable water and sanitation. But as a one-way stream of capital, the living water of charity can easily dry up, especially in times of slow economic growth.

Within this context, Milaap CEO Sourabh Sharma and his co-founder and president Anoj Viswanathan envisioned bringing in the microfinance loan model, hoping to promote a new and sustainable model to help the poor.

‘In India, microfinance gives loans to fund business venture start-ups – particularly those ignored by bank lenders – while charity provides basic services to the people. We wanted to marry the best of both worlds and create a platform where you can provide for basic needs on a loan model,’ says Mr Sharma.

The combined passion of both co-founders gave birth to Milaap Social Ventures, which is an online social microlending platform that allows anyone around the world to loan money to the working poor in India.

The money that the nascent social enterprise accumulates goes entirely to the borrower, which is sourced through existing non-governmental organisations (NGOs), field partners, and other non-profit organisations.

The microlending enterprise sustains itself by taking a small percentage of money generated by the low interest rate.

Mr Sharma’s own passion to become a hand that extends opportunity to the less privileged germinated during his time in university, where he himself got a helping hand through a loan. ‘I was able to take a loan for university, and therefore complete my education at NUS (the National University of Singapore). I am where I am because of access to opportunity – and I believe this should be given to everyone,’ Mr Sharma says as he reminisces about the past.

Having graduated from NUS in computer science in 2004, he embarked on his first start-up, which was a photo and video sharing mobile application. Although Mr Sharma enjoyed his job, he felt the need to journey down a different career that had more of a direct impact on people’s lives.

‘I was not satisfied internally, even though I was earning a good amount. I needed to do something more meaningful,’ Mr Sharma remarks. ‘Now, I’ve entered (the microlending business) full-time. I’m definitely in it for the long run. I have friends in banks and they’re talking about buying the next house or car, but I’m not impacted much, because Milaap gives me my share of fulfilment.’

Mr Viswanathan echoes a similar experience that drives his passion. ‘As a student from a tier three city in India, I felt privileged and grateful to have received a scholarship to pursue my undergraduate studies in NUS. The only way to pay it back is to pay it forward, by creating access to opportunity to those who don’t have it,’ Mr Viswanathan remarks.

‘During my third year at NUS, I took a year off for a stint in parts of Orissa, eastern India. I saw first-hand the impact of a $25 solar lantern, sold on microcredit to the extremely poor (who earned) $1 a week. (Thanks to the lantern) people could work at night, children could study in the evenings, festive occasions were more joyous, and farmers used it to chase elephants away from rampaging their paddy fields. I realised that there is a need to replicate the model across India to show that providing essential services can have a long-term impact,’ Mr Viswanathan continues.

The two founders believe that microlending is a win-win solution for both lenders and borrowers. ‘I think that’s a pretty powerful proposition for someone who wants to do good,’ Mr Sharma says. ‘You’re not really losing anything except the small interest rate you might earn on, say, $100.’ So far, Milaap has successfully raised US$140,000 (S$170,000) for borrowers in Karnataka, Tamil Nadu, and Maharashtra, with a 100 per cent repayment rate.

At the same time, lending helps the poor because it provides a running stream of loan capital. ‘In essence, you’re teaching (the borrowers) how to fish rather than giving him a fish,’ Mr Sharma says, referring to an ancient proverb that emphasises giving opportunity for the development of a skill, beyond merely giving a one-time gift.

But for the co-founders of Milaap, the social enterprise’s early success marks only the beginning of what is yet to come. Indeed, they have ambitious plans for the company’s future. They aim to break the US$1 million mark in loans by this time next year – a goal which requires them to raise a sum of US$850,000 in the coming eight months.

In an effort to ensure a steady stream of loans, Milaap aims to bring its platform services to the givers. Mr Sharma is making use of his background in computer science by bringing Milaap to social networks like Facebook.

‘Today’s Internet’s users have a five-second attention span, and they spend that time on Facebook. Hence instead of trying to make an effort to attract traffic to our site, we want to go where people are already spending time,’ Mr Sharma explains. ‘Tomorrow, we hope there’ll be a tab on Facebook, where you can see all your borrowers, and where repayments will come as a Facebook notification.’

In the eyes of the two founders, Milaap’s transformation of people’s lives is what ultimately matters most. Says Mr Sharma: ‘We want to impact thousands of people. I think this can be the largest platform to do good.’