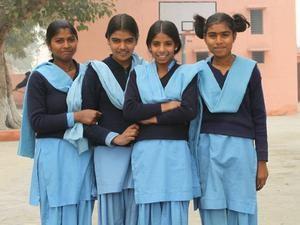 Coca-Cola and NDTV are partners in a campaign called Support My School in which they are promoting a three year plan to reach 1,000 schools through a range of projects including planting trees, installing rainwater harvesting systems and water filters, and educating children on healthy living. Out of all the projects, one that has helped keep children, and particularly girls in school, has been the provision of toilets and better sanitation solutions. Corporate partnerships are increasingly seen as a channel for bringing needed resources to low-capacity schools and communities. Jhundpur is not fuel for the media’s breathless portrayals of India’s growth.The village lies about an hour north of Delhi, past power plants and construction sites, on some days covered by a layer of thick, gray smog.On approaching highways, shops hawk baskets of vegetables that join local women’s garb in offering a colorful contrast to the bleak landscape.Closer to the village, dusty roads are lined with neatly stacked dung patties, a gift of fuel from the cows roaming the area. Homes made of stone and grass hearken back to an earlier era. More than half of India’s 1.1 billion people are villagers. They belong to a class that has in some ways been left behind by the growth taking place in the bustling cities. This is evident at rural schools, where books, computers and even proper toilets are hard to come by.Atlanta-based Coca-Cola Co. is leading an effort to show how big changes can come from small donations.With a team of partners including news network NDTV, Coke is driving a campaign called Support My School in eight clusters of schools in 10 Indian states. NDTV publicizes the needs, and Coke drives the fundraising, both directly and through telethons and other activities. The message? Keep kids in school.A year into the three-year plan to reach 1,000 schools, the response has been overwhelming, said Atul Rajbhushan, a Coke manager of public affairs for India. If the success proves sustainable, the India model could be adapted and exported to other countries with similar needs.A team from the Coke headquarters in Atlanta and a representative from the Coca-Cola Africa Foundation on Feb. 4 visited GMS Jhundpur, a pilot school where the program began in earnest a year ago.GlobalAtlanta joined them while in Delhi on an India reporting trip.The team saw simple improvements that had made a profound impact. For an average cost of about $10,000, the partnership plants trees, installs rainwater harvesting systems and water filters, sets up playground equipment and educates kids on healthy living.Rainwater is conveyed from a rooftop pipe system into the ground, expanding and improving the groundwater supply, which is tapped through a well and filtered for drinking.The success of the initiative is easy to read in the school’s enrollment numbers, Mr. Rajbhushan said. GMS Jhundpur has 560 students this year, 130 more than last year. They are taught by just six teachers, up from two the previous year.“That’s the picture of success for us,” said Mr. Rajbhushan. “I’ve seen the children from the private schools, they’re joining here.”The key to bringing them back? Bathrooms. Throughout rural India, girls are leaving schools because of sanitation problems. In schools lucky enough to have one toilet, girls have to take turns with boys. In less fortunate areas, students are forced to use the nearby fields, a process that can be difficult and embarrassing for girls.For Yagdutt Arya, the principal of GMS Jhundpur, the new bathrooms are revolutionary. Having basic needs met allows the school to focus on education, which wouldn’t have happened without private intervention, Mr. Arya said.Government funding is limited because it has to be thinly spread among so many needy schools, he said.“It’s not enough, but we manage somehow,” Mr. Arya said of the funding he receives from the state.To fill in the gaps, Indian schools will have to work creatively with private companies like Coke or individuals like the local farmer who donated about $1,000 to fix the school’s crumbling front gate, he said.There’s only one problem: As more kids come back to school, the needs multiply, Mr. Arya said. Just a year after getting its first suitable facilities, the school will soon need a second set of toilets.Coke can’t tackle every problem but hopes to call attention to the needs so that the government and other donors will take the baton, Mr. Rajbhushan said.In the future, Coke plans to drive the initiative and attract more funding from local companies and international non-governmental organizations, he said.Some big names have already begun to help. TATA Teleservices has provided used computers to teach students basic Internet skills. Britisheducational outfit Pearson Group has given new books to form a small library.Some would call Coke’s effort a classic case of corporate social responsibility. Neville Isdell, the former chairman and CEO of the company, might say it’s a manifestation of “connected capitalism,” a term he coined to describe actions that are core to a company’s business interests but also benefit local communities.Mr. Arya, the principal, believes that companies will eventually reap the benefits from their investment in India. But regardless of whether they get tax breaks or future customers, the help is necessary now.“It’s very good for us that companies are coming and helping (schools),” he said. “They’re not taking anything from them. They’re just helping, and the government has no problem with it.” http://www.globalatlanta.com/article/25342/