The Microfinance Crisis: Is There A Way Out? 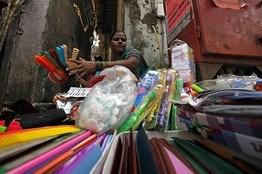 In light of the controversy and restrictions put in place for the microfinance industry in Andhra Pradesh (AP), India, commercial banks had stopped providing on-lending funds to microfinance institutions (MFI). AP-based MFI BASIX, however, is testing a new model that allows the organization to partner with a bank instead of borrow from a bank to on-lend to clients. The model allows the MFI’s on-the-ground operations and interactions with clients to largely remain the same, while the institution becomes a bank agent instead of a loan originator. Overall, it allows BASIX to continue operations, commercial banks to extend their reach in remote, rural areas, and customers to remain banked.

For the better part of nine months, the microfinance industry has been in paralysis because of restrictions put in place by the government of Andhra Pradesh, the state that was the center of micro-lending in India. Almost immediately, banks turned off the credit tap that allows microfinance lenders to operate, and borrowers abandoned the high repayment rates of the past and stopped paying.
Recently, the full impact of the crisis has been revealed. SKS Microfinance, the stock market-listed microlender, reported a net loss for the three months ended June 30 because of a sharp jump in provisions against bad loans and loan write-offs.

And Vijay Mahajan, the chairman of BASIX, a company that specializes in micro-lending and other services targeted at the poor, warned that his microfinance operation is on the brink of folding.
All this is depressing news for those who view microloans as a means of empowerment for those ignored by mainstream banks. It’s getting to the point where India has to think about whether it really wants a future without microlenders, because that appears to be where things are headed.

Mr. Mahajan, however, is testing a new business model that may, if it catches on, provide something of a lifeline for the industry though it won’t solve all its problems.

The key move he has made is to establish a business within the BASIX Group that acts as a partner to banks rather than a borrower from banks. This is a tweak that doesn’t necessarily change much on the ground but changes tons in perception and viability. Under this model, the company stops being the originator of small loans to the poor, the definition of microfinance, and instead turns BASIX into a bank agent. Borrowers (BASIX lends to individuals and doesn’t use the group model favored by other lenders) won’t see much difference. They still will interact with BASIX representatives, who will be responsible for originating loans and collecting repayments.

But, critically, the BASIX representatives will be dispensing bank loans, rather than BASIX taking credit from banks onto its books and then assuming responsibility for the loans it issues. The bank will be able to set the interest rate and will pay BASIX a fee for handling the loan.

If the politicians of a particular state don’t like what they see, they will have to deal with a politically-connected, well-established bank — most likely government-owned — as well as possibly the Reserve Bank of India, rather than targeting small, politically lightweight microlenders. For microfinance companies, this model has the added advantage that the bank assumes the risk of default on the loan.

Mr. Mahajan told India Real Time that this bank partnership model represents a “desirable future” for the company. He declined to name the area where the company currently is using this structure (though we might hazard a wild guess) or to name bank partners.

But he said BASIX already has secured approval to lend out $56 million in bank capital. That contrasts with what he says is a total of just $5.6 million in bank loans to BASIX itself under the old model in the months since the crackdown in Andhra Pradesh in October made banks skittish about lending money to MFIs.

In the new model, “the bank tells us pretty much ‘This is what we want,’ the bank ultimately approves it, we do collections and the full life cycle of the loan for a fraction of the cost” that the bank would incur if it tried to make the loan itself. One of the great advantages of microfinance is its presence in areas where banks can’t, or won’t, reach. That gives banks an incentive to pay the likes of BASIX to act as their agent.

The Reserve Bank mandates that public and private-sector banks dedicate as much as 40% of their net credit to so-called priority sectors, which include micro-enterprises and disadvantaged segments of society. Of that, 18% must go to agricultural sectors. This has been hard for banks to deliver on, but pushing their own loans through microfinance institutions could help them reach those targets. Mr. Mahajan notes that BASIX is well-placed in this regard as it already offers additional services that focus on agriculture, market linkages, and livestock.

The biggest obstacle, Mr. Mahajan said, is digging out from under the hole that the Andhra Pradesh clampdown already has created. “We can get to this desirable future if we can find enough capital to recapitalize and restore banks’ confidence,” he said.

This won’t work for everyone. Even Mr. Mahajan says it is not a “complete alternative” to traditional microfinance. But, for some including BASIX, the partnership model offers a potential bright spot in an otherwise bleak future.

One could envisage a time when it is banks, not microfinance companies, that are competing to finance the poor in an environment that is protected from the whims of politicians and overseen by the RBI. Microlenders would compete for the banks’ business and would be forced to drive down their own costs so that they could turn a profit even if banks set lower interest rates on loans than MFIs do now. The banks would be responsible for ensuring that their agents’ collections practices didn’t cross the line and incur regulatory wrath.

Borrowers would be brought into the mainstream banking system with loans, most likely at lower rates than they currently pay. The microlenders, meanwhile, could focus on service delivery and on selling a broader range of financial products that the poor also need to improve their livelihoods: insurance, savings, training and pensions.