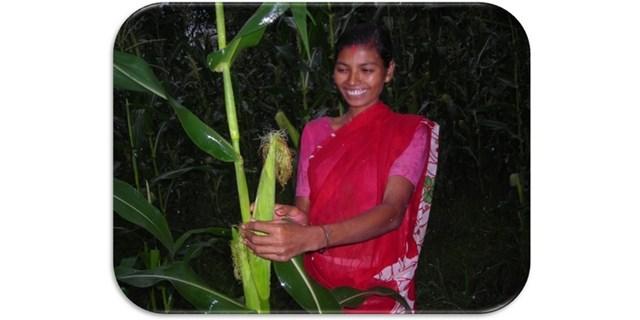 A recent Next Billion blog entry reports on UPna sapna, a program launched by the non-profit, Network for Enterprise Enhancement and Develop Support (NEEDS), in Jharkhand, one of India’s most natural resource rich but poorest states. The NEEDS program helps provide land to the “ultra-poor” that make up much of the population and trains them in leveraging the land and natural resources through crop planning, planting techniques, and irrigation methods, among other technical skills. The 24 month program aims to improve food security and livelihoods in the region and hopes to help its target group achieve self-sufficiency. Network for Enterprise Enhancement and Development Support (NEEDS) is a nonprofit organization that works in Jharkhand, one of the newer states in India located in the northeast corner, often cited as the poorest state in the nation. Most of its initiatives are based out of the Santhal Pargana region in Jharkhand, the most destitute in the state. According to NEED, almost 50% of the region’s 6.8 million people belong to highly marginalized groups: approximately 29% are tribal peoples; 11% are dalits; and 9% are landless (non-tribal and non-dalit). The women in this region don’t have rights to land and can only have ownership through land received as a gift by a male relative as a ‘taben jom’ (a token gift). Close to 35% of the region’s population is under extreme poverty with over 2 million people well below the poverty line. Even after the formation of Jharkhand as a separate state in 2000, for which these people fought hard, little has changed for them and they continue to live in dire poverty. Poor infrastructure, continuous naxal activities, and corruption act as deterrents to any progress.

Ironically, Jharkhand is the most natural resource-rich place in India. It is thus even more tragic to see such a region being home to a population that is mostly “backward,” typically engaged in subsistence agriculture and occasional wage labor, consistently the least literate, and often excluded from formal society. A lack of sustainable livelihood affects their food security and thus they either suffer with chronic hunger or consume food sans nutrition. About 70% of India’s population depends on agriculture for its livelihood; in most cases, agriculture is the only source of income for the household. Much has been written about the plight of farmers in India, and chronicled cases of suicides blamed on failed crops or debt traps. Thus it is critical to design interventions that, apart from providing other livelihood options, utilize their piece of land and help them become informed and sustainable. Such a model, if successful, holds tremendous promise for improving the lives of millions of farmers all over the world.

The NEEDS team in 2009 launched a 24-month pilot program called “UPna sapna,” designed to target and serve this extraordinarily marginalized population. The program’s main purpose is to teach tribal communities how to farm, and achieve self-sufficiency and improved food security by growing crops on their own throughout the year. The program focuses on planting techniques, irrigation methods, proper planning, and provides in-depth, repetitive training to program participants. Since most of these households have been allotted a small plot of land (through government schemes and incentive programs in the past), the objective is to facilitate its productive use to create sustainable income. The first pilot of UPna sapna, initiated in 2009, currently works with 372 households.

UPna sapna focuses on food security and livelihoods – both agricultural and non-agricultural. One female member from each household is nominated to join self-help groups (SHG) that are the backbone of this program. These women are organized into these self-regulated groups and participate in the interventions as a group. The groups also make it convenient for the women to access finance from banks. Interspersed throughout the program cycle are interventions covering health­care, child education, and financial literacy. Launching multiple interventions simultaneously can overwhelm a community and yield less effective results. The ultra poor need time to accept each activity and to build confidence in the intervening organization, the program and themselves. Thus, the program is executed over the course of two years to provide enough time for the members to improve agriculture in all seasons and adopt new livelihoods in addition to receiving ongoing interventions in other areas.

There are few working models for practitioners of ultra poor programs and it is critical to design interventions keeping in mind the regional and the cultural nuances. One of the most difficult and critical aspects of any ultra poor program is targeting and selection of those most in need. The UPna sapna team designed a selection process that uses a multi-stage filter to select the poorest households. Internationally accepted indicators (for example, the Grameen Foundation’s Progress out of Poverty IndexTM (Read a recent NextBillion analysis of the PPI here), internally developed indicators (developed by NEEDS to highlight local nuances), and the com­munity’s own input are all vital components of selection. The selection process at UPna sapna encompasses the following steps:

The UPna Sapna team is working in an extremely difficult region with a population that is grossly under-served and thus fa ced several challenges in the initial launch. Given the sensitivities surrounding the segment, the team had to be dynamic and modify the procedures in real-time based on learnings from the field. Below is an example of one such learning on the field and how UPna sapna team adapted to it:

The multiple screens and selection criteria were intended to reinforce each other; instead the results often were conflicted. For example, many households that scored low on the NEEDS indicators would have high scores on the PPI. With less than 2% exception, participants scored points only on the PPI’s questions one and five, namely, number of children and ownership of a motorcycle or bicycle. Responses to question five were less relevant indicators of wealth, as the majority of households in the region owned a bicycle (often subsidized by local government leaders) out of necessity in the rural setting. Households with a bicycle and fewer than three children were automatically disqualified because of a PPI score above 14. The team did not feel that selecting individuals on the basis of number of chil­dren was appropriate: they noted numerous cases of infant mortality in the area due to malnutrition and illness. In fact, some of the poorest households in the village had one child or none at all. The team quickly made a decision to use the PPI not as a selection tool, but more as a final verification of poverty level.

There were many more challenges faced and learnings gleaned from the initial UPna sapna pilot. Those and other program details have been captured in a detailed case study authored by my former Unitus colleague, Victoria Fiore. The case study, which will be shared with the industry soon, is intended to be a guide to fellow economic development practitioners looking at the ultra poor segment.

The series, as regular readers may remember, explores whether or not this segment is bankable, what interventions will efficiently bring these people into the mainstream economy, and – outside of financial services – what is critically needed in order to improve the lives of the ultra poor?  While there is still much work to be done before and after UPna sapna graduates its first class in the fall of next year, we are keen to see if the effectiveness of the program as evaluated through progress on social metrics and the overall learnings will help answer these questions.

(Editor’s note: Although Unitus wound down its microfinance operations earlier this year, it has committed to see through the Sorenson/Unitus Ultra Poor Initiative until late next year.)