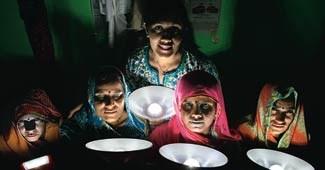 A Business Today article profiles Frontier Markets, an Indian social enterprise, which uses village-level community workers to distribute solar energy products in rural India. Frontier Markets sources solar products in bulk and uses a commission-based model for rural sales distributors to get products such as lamps to the market. Though Frontier Markets is currently only distributing its products in Rajasthan, the company’s partners include makers of solar products such as D.light, Duron Energy, and Greenlight Planet. Frontier Markets has a current sales target of 500 products per month and hopes to scale the model to another three to five states by 2017. Given India’s size and the sheer number of its farflung villages, rural marketing is always a challenge. And when the product is relatively new, like solar lighting devices, the challenge gets even bigger. Yet the Jaipur-based Frontier Markets, or FM, founded by Ajaita Shah last March, has taken up the task and despite the odds, seems to be succeeding.

In recent years, a host of companies – 347 at last count, including 82 in the small and medium enterprises, or SME, sector – have begun making clean energy products. But taking them from village to village, giving rural folk the opportunity to buy and convincing them to do so, is another matter.

Shah, however, is not deterred. “Reaching out to rural markets requires a bottom-up approach,” she says. “We have to identify what rural people need, the price points they are comfortable with, demonstrate the use of the product we are selling, and show them why it is relevant to their lives.” Having earlier worked with microfinance institutions, Ujjivan Financial Services and SKS Microfinance, Shah knows there are many products for which there is latent demand in rural areas, but they do not sell there simply because of distribution problems. With solar lamps, she saw the opportunity to fill a vital gap.

FM sources solar products in bulk from different manufacturers and retails them under the brand name ‘Saral Jeevan’. Its trump card is the profile of its agents, whom it pays a commission. These are village-level community workers, who are already familiar faces in the region, since they also provide some other service. “People trust these village representatives as they are known to them,” says Shah.

They include krishi mitras (farmers’ friends) who are employed by the Krishi Vigyan Kendras, an Indian Council of Agricultural Research project, to keep farmers informed about latest agricultural technologies; workers in government-run anganwadis (creches); as well as employees of a privately-owned dairy, which sells milk in rural areas.

So far, FM’s network is confined to Chomu district of Rajasthan, adjoining Jaipur, but it hopes to expand much further in the coming years. Bhagwan Sahai Yadav is one such krishi mitra, who also sells Saral Jeevan products. In a testimonial to the product he sells, he bought one himself. “I bought a solar lantern from Frontier Markets so that my granddaughter could study in the evening,” he says. The company has 30 such agents and has sold 700 solar lighting products in 214 of Chomu’s 350-odd villages.

FM has tie-ups with companies making clean energy products such as D.light and Duron Energy in Bangalore, Intelizon in Hyderabad and Greenlight Planet in Mumbai. “We are now chasing a target of selling 500 products a month,” says Shah. The plan is to reach out to two other districts, Alwar and Bassi, in six months and all of Rajasthan by the end of 2013.

Shah wants to replicate the model across three to five other states in the next five years. No clean energy company has yet been able to establish a pan-India presence. Some have tried to rope in microfinance companies to help with the distribution, but the effort has usually failed. And while distributing through village-level community workers seems a viable method, bottlenecks remain.

One such is product servicing. “Where does a customer in a far-off village go if the battery of his solar lamp turns out to be faulty or the switch malfunctions,” asks Akansha Chaurey, Director, Decentralised Energy Solutions, at The Energy and Resources Institute, or TERI. Community workers do not have the specialised knowledge to repair lamps if they stop working. But at least they can, and do, provide corrective feedback to FM and, through it, to the manufacturers. Duron Energy, for instance, stopped production of one of its solar lamps called Duron Pro following reports from FM that its light, though very bright, was too focused and did not cover an entire room.

“Though the model is very scalable, given the huge market at the bottom of the pyramid, execution remains a major challenge,” says Paula Mariwala of Seedfund, which put seed funding into FM last year.
http://businesstoday.intoday.in/story/frontier-markets-in-solar-energy-products-business/1/21350.html