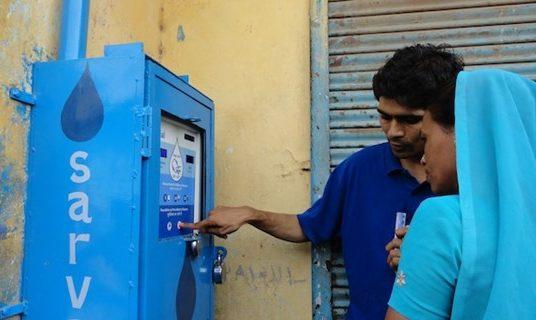 Sarvajal, an organization in India, has developed solar-powered water ATMs for customers with pre-paid cards in rural India. Sarvajal’s operational model involves franchising water ATMs to entrepreneurs who then sell the filtered water in their communities. To date, the company has established 120 facilities and has reached 60,000 people who pay less $3 per month for the service. The company uses local cell phone networks to monitor and assess quality and quantity of the water treatment facilities.

Clean water is a luxury; one in eight people around the world lack access to supplies of the stuff, and unsafe water is responsible for 60% to 80% of all disease in India alone. There are plenty of possible solutions–new wells, pricey community water filters–but an organization called Sarvajal has devised a fix that is rapidly spreading across India: solar-powered water ATMs.

Sarvajal was honored this month as a Tech Award Laureate for its franchised water treatment facilities that leverage local cellular networks to remotely keep track of quality and quantity. “One of the objectives when we first started [in 2008] was to create a market-based mechanism of health care,” explains Sameer Kalwani, CTO of Sarvajal. Hence, the solar-powered water ATM, a device that gives customers in rural areas access to clean water any time with the use of a pre-pay card that can be recharged via cellphone.

Here’s how the water ATM processed works: local franchisees–people who want to make money as water stewards for their community–are allowed to operate ATMs in their villages. They pre-pay Sarvajal for water, and pick it up to dispense into the ATMs, which treat the water with reverse osmosis and ultraviolet rays. Community members get their pre-pay water balances from the franchisee, who is allowed to keep all cash from home deliveries. If something goes wrong with one of the cell phone network-connected ATMs (i.e. a leak), Sarvajal finds out immediately and fixes it.

Sarvajal’s franchisee network is growing fast. So far, there are 120 facilities in India serving 60,000 people for the price of less than $3 per month per family. In remote areas where clean water was impossible to come by before, this is more than just a luxury–it’s a potentially life-saving technology.