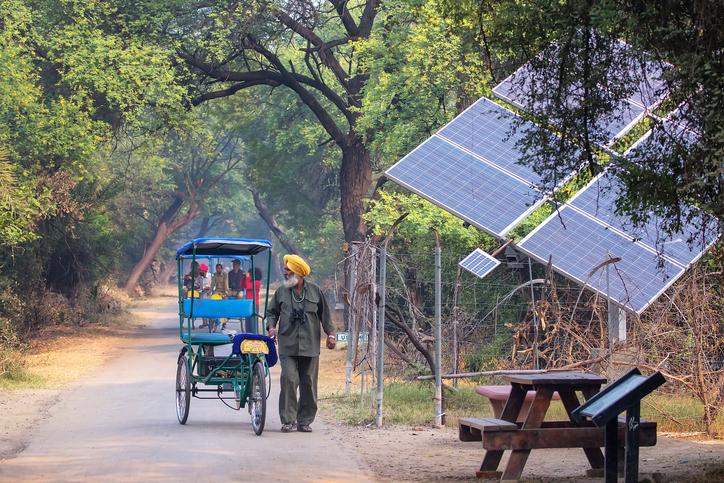 Off-grid solutions based on renewable energy sources, particularly Solar Photo-Voltaic (PV), hold great promise to bring electricity to the 80 million or so households that are currently without it (Census 2011). India is very well endowed with solar energy. Solar PV systems scale well with increasing demands and need minimal day-to-day operation. We argue that villages and remote hamlets that are off the main grid can leapfrog into sustainable power access via Solar PV mini-grids as a long term solution rather than as a stop-gap ‘till the time the grid comes’. Rural areas that are power starved despite having a grid line can also benefit from grid-interactive versions of these community level power plants. These mini-grids will provide ‘Electricity beyond Lighting’, which is critical for achieving livelihood enhancement.

In this report, we first analyse the diverse challenges that currently inhibit replication of Solar PV minigrids across the country, especially when taken up as a business. Viability of 10 kilowatt-peak (kWp) or similar scale systems is very difficult, if not impossible, to achieve. Current subsidy regimes and processes are either insufficient or too tedious. Operational challenges include overheads of reaching remote places, last mile logistics, laying down a localised grid with appropriate metering, payment
collection systems, etc. Furthermore, banks are not yet inclined to finance these small scale projects,
particularly the local entrepreneurs who lack credit history and collateral. Dearth of trained manpower
to install and operate these mini-grids is one of the biggest obstacles to scaling up these systems across
lakhs of villages. On the technical side, battery maintenance and replacement is a challenge for solar
systems, and one needs creative load optimisation as well as innovations in financing to tackle this cost.
We highlight examples of innovations by a few early players to tackle some of these issues.
An Energy Revolution akin to the Green Revolution in agriculture in the 70’s needs to be brought about
through an enabling ecosystem. It becomes clear that an ‘assisted entrepreneurship’ model would be
apt for Solar PV mini-grids to scale in the country. We believe that the creation of a franchise network of
mini-grid operators or distribution agents could be a path to scale. While some existing solar power
producers are already playing the role of aggregators, we believe that large companies in the corporate
sector could play a major role, leveraging their brand, rural distribution and supply chains, to quickly
create and scale out franchise networks.

2022 marks the 75th anniversary of India’s independence and it is critical that as a country we muster the
conviction to strive for ‘100% Electrification’ to mark the occasion. We believe that the Ministry of
Power (MoP) and Ministry of New and Renewable Energy (MNRE) are caught up in their continued focus
on grid extension and on expanding grid connected capacities, despite the fact that renewable energy
alone can pull the rural areas out of the vicious circle of no power-no development.
We discuss limitations of existing policies and recommend policy incentives to usher the nation on a
faster path towards this goal. We suggest that MNRE and MoP come out with a joint policy that creates
the enabling framework within which other partners such as industry, entrepreneurs, and nongovernmental
organizations (NGOs) can contribute. The Ministry of Finance must also be brought onboard.
The policy must:

– Empower business models such as franchise networks of companies through an appropriate
combination of subsidy, grants and improved access to loan capital;

– Ensure large scale capacity building efforts are put in place to train the thousands of youth who
can be employed in this sector – especially entrepreneurs. This is in addition to tens of
thousands of technicians that are being sought to be coached under the Jawaharlal Nehru
National Solar Mission (JNNSM) Phase II (draft document);

– Provide a majority percentage of capital investment as Central Financial Assistance (CFA). Exhort
public and private sector banks to boost capital investment into off-grid solutions. Stimuli could
be a combination of guarantee schemes and a separate lending limit for renewable energy;

An illustrative calculation shows that if 50,000 villages are to be electrified by installing 10 kWp Solar PV
mini-grids in each of them, the cost would amount to approximately Rs 15,000 crores. Given that this
investment will pay for the cost of power supply for the next 25 years (without counting operation and
maintenance costs), this is not a lot of money. It is less than two years of India’s annual kerosene
subsidy, for example. The government must prioritize allocation of these funds.

We outline a framework for stakeholder cooperation to enable the aggregator and local entrepreneur to
scale up deployments and operations quickly. To ensure that there are no gaps in communication or
decision making, a ‘War room’ could be formed for waging this ‘War on darkness’. A lean team of
empowered individuals, led by a befitting leader, can be put in charge of ensuring the success of the
mission, in an accountable and transparent way.

Furthermore, we present a roadmap for achieving this goal in three broad phases:
Phase I: LEARN (up to 2015) – first couple of years have to set the stage, with a clear policy, building
public awareness, setting up nationwide capacity building schemes, rolling out incentives to get large
companies on board, etc. A quick learning and demonstration could help identify feasible on-ground
models, which could then be groomed for speedy execution.

Phase II: SCALE (up to 2018) – the second phase would see scaling up by multiple orders of magnitude.
With the business viability proven and large companies prepped, the momentum will pick up. Training of
manpower would be stepped up. The pace now would need to support electrification of six thousand
villages a year.

Phase III: DELIVER (2018 onwards) – the final dash to the goal would need a massive endeavour from all
stakeholders, and readiness on part of state government agencies and financiers alike. An environment
with hundreds of aggregators and thousands of entrepreneurs would catalyse tens of thousands of
installations per year. Policy regarding grid interactivity could be finalized and implemented starting
about this time. A clustered-village-approach would not only speed up the activity, but it would also
enable a wider range of (or optimal) solutions via Solar PV-biogas or Solar PV and micro-wind hybrid
plants.

The developmental impact of creating thousands of rural entrepreneurs along this path cannot be
emphasised enough. A national policy to deploy Solar PV mini-grids for electrification can truly herald a
new era of Democracy in Energy Access: Power of the People, by the People and for the People.