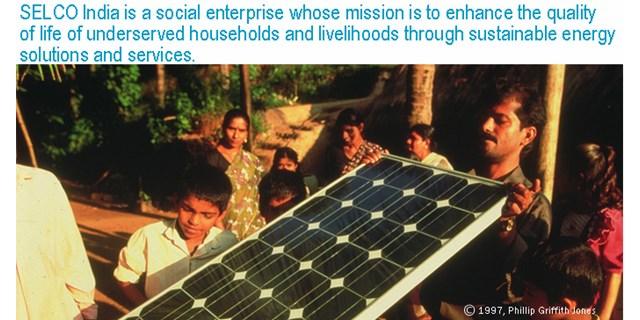 Recently, Bangalore-based Solar Electric Light Company (SELCO), which develops sustainable energy solutions for low-income communities, partnered with US-based Applied Materials, a chip equipment manufacturer, to electrify 1,000 village households and schools in the southern Indian state of Karnataka. The Applied Materials Foundation is providing $170,000 for the costs of photovoltaic cells, solar panels, and equipment, which will be installed by SELCO. In providing a variety of energy solutions, SELCO has realized annual revenue of $4 million and has provided solar electricity to more than 125,000 customers.

Fifteen-year-old Shailaja C does not have to inhale toxic fumes from kerosene lamps anymore each time she sits down to study. A student of the Government High School in Kyasamballi, a remote village in Karnataka’s Kolar district, Shailaja now uses the bright light of a bottle-sized solar table lamp to study for two hours each evening.

Her mother uses the same light for cooking and also carries it as a flash light to shop in the evenings. The village, about 100 km from the tech hub of Bangalore, doesn’t have access to electricity. This change in their lives was made possible by Bangalore based social enterprise Solar Electric Light Company (Selco) cofounded by clean-technology entrepreneur Harish Hande.

The firm develops sustainable energy solutions and services to underserved households and businesses.

The solar lamp, which is one such solution, can last for nine hours after charging. It is sponsored by the schools, donors or government as part of Selco’s light for education project. “The beauty of this project is the use of technology to promote education,” said Arjun Menda, chairman RMZ Corp, a leading corporate real estate developer. Menda, an alumnus of IITKharagpur, is one of the supporters of Selco’s light for education project through his foundation.

The attendance at schools, such as Kyasamballi’s government school, has also improved as students charge the chocolate-bar-sized battery of the lamp in the centralised solar charging system installed in their schools. Selco, which has 180 people including anthropologists, zoologists, designers and engineers, innovates and incubates new products and technologies in its laboratories to solve the energy problems faced by un-served and under-served communities.

Besides the light for education project, the labs developed solar headlamps used by labourers, midwives and street vegetable vendors. The lab also developed a small-scale, solar-based hybrid crop dryer for use in households and small scale industries.

The Applied Materials Foundation, an arm of the $10.5-billion global semiconductor firm, will provide $170,000 towards the upfront cost of photovoltaic cells, solar panels and allied equipment for the pilot project. Selco will install the solar lighting systems and maintain them through its 28 branch offices. “It definitely will give us ideas to look at models of engagements.

Around 70% of India lives in rural areas. It is a massive opportunity,” said Aninda Moitra, president of Applied Materials India. Moitra hopes to do more such engagements with entrepreneurs and replicate the model in other countries based on the outcome.

On completion of the project, the solar lighting system will generate energy to provide four to eight hours of electricity to about 10,000 people dwelling in 1,000 rural homes.

Around 400 million people across India still do not have access to reliable electricity and an estimated 100,000 villages in the country are yet to be connected to the national power grid, according to a World Bank report.Millions of rural Indians use tin lamps fuelled by kerosene to provide light after it gets dark, and organisations like Selco are trying to change that.

While travelling through the villages of Kolar, one can hear the loudspeaker music of village circus roaming, bicycles with squeaky wheels and the rumbling of wooden carts laden with firewood. SM Sujatha lives in one of these villages and belongs to a farming family.

For her, the Selco solar system has provided relief from frequent powercuts and is helping her children to study in the evening. “I am also able to feed my livestock during the night,” said Sujatha, who bought two systems for Rs 13,000 on installment basis with the help of rural bank, Pragati Grameena Bank (PGB). The system has a life of over 15 years.

“The monthly installments are equal to or less than the amount spent by the family per month on kerosene,” said Ananth Aravamudan, senior technical manager at Selco Labs.

Hande, a graduate of Indian Institute of Technology and the University of Massachusetts, founded the firm 16 years ago with Rs 1,000 and scholarship money.

“We have outlasted Lehman Brothers — they started the same year as us,” said Harish Hande, managing director of Selco.

The venture later got funded by The Good Energies Foundation, a Swissregistered not-for-profit foundation; E+Co, a non-profit company and The Lemelson Foundation. It has also raised $1 million in debt from IFC.

With annual revenues of approximately $4 million, Selco has provided solar-based electricity to over 125,000 customers across Karnataka, Kerala and Gujarat through its branch network. Selco has created employment for locals such as Charan Singh R, who works as a maintenance man for the company. Even though he earns a meagre salary, the job has helped Singh to get his two sisters married.

“I have the responsibilty for proper inspection and maintenance of these systems in several villages,” boasted Singh, who is respected by the villagers. Selco has now set a target of reaching 200,000 households by 2013.

It aims to provide other solar applications such as cooking and solving water problems. “I keep telling the young entrepreneurs to explore rural areas. Don’t complain if five years down the line, Americans and Europeans know more about rural India then them,” said Hande.