Social Enterprise Showcase: Jack On Block – A Handy Plan For The Handyman 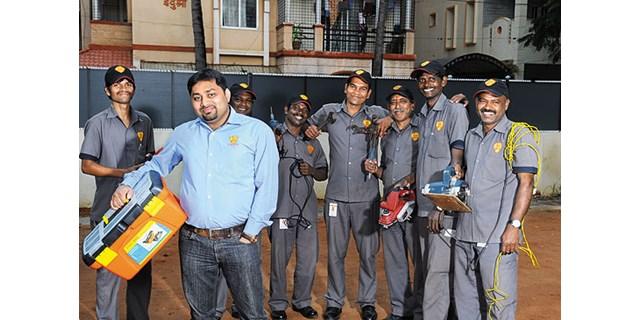 Jack On Block is a new age facilities management company that seeks to solve the chronic urban housekeeping problem while providing respectable and dignified livelihoods for informal domestic helpers. Once hired, these men and women form an organized and skilled workforce that can be deployed in homes, apartment complexes and small businesses including offices, budget hotels, restaurants and educational institutions for cleaning, repair and maintenance services.

Starting up based on the idea was not as simple. “I was strongly discouraged from working with this particular group of job seekers. I was warned that they could not be trusted and that building an entire service around this work force would prove to be challenging and unsuccessful,” says Vatsa.  In the firm belief that trust in the informal housekeeping sector can be regained, Vatsa roped in Manohar Arasan, who had over 10 years’ experience working with facilities management companies, as the head of operations. The first few employees were hired through word of mouth references, and through Arasan’s contacts. By August 2012, when operations began, the firm had 25 employees, most of them with underprivileged backgrounds. Another serious challenge has been with funding.Typical venture capitalists tend to view the JOB service as a ‘dirty business’ against the backdrop of e-commerce or IT businesses.

Dignity for the informal sector

Over 92% of India’s labour works in the informal sector, mostly without job security, driving close to 50% of its GDP growth. While the Government is trying to address the skilling need through the National Skill Development Corporation (NSDC)’s programs, entrepreneur ventures like JOB are addressing part of the need. JOB’s  workers enjoy enhanced income that will benefit both them and their families. They gain access to retirement benefits, healthcare and health insurance, life insurance and more. They also get access to life services including bank accounts, credit, and education for children.

JOB – Why it clicks

Vatsa quotes a strong ability to aggregate and retain a quality workforce as the secret sauce to their success thus far. The Unitus Seed Fund backed social enterprise has brought in dignity and respect for what has always been viewed as a “dirty” job.
JOB prefers to pay more than market rates to all its employees.

“It is not only compensation but also a sense of job satisfaction that is keeping the technicians and handymen committed to JOB. Most practices – from benefits to perks and training – are in line with what any IT company in Bangalore would offer,” says Vatsa.

* JOB prefers to pay more than market rates to all its employees. While Karnataka stipulates wages of Rs. 6,000 per month, JOB employees get about Rs. 8,000 a month.

* JOB honours the Employee of The Month award through a certificate and gift voucher to a different high-performing employee each month.

* Birthdays are celebrated, where a mason who may have never cut a cake before in his life is now blowing out candles on one.

* Working conditions are maintained at the highest standards, ensuring that the company leads by example. All employees then automatically feel a strong sense of belonging and motivation to conform to the high standards of hygiene and cleanliness maintained by their employer.

* All employees have a uniform and ID card and receive their salaries in bank accounts. Employees enjoy different types of leaves as well and I have found that even socially their lives tend to be improving – including their potential as grooms!

* The JOB team provides their workforce with requisite soft skill training as well – on how to handle a customer query, converse in basic English and even self-grooming. The JOB opportunity has been transformational for their work force.

Having begun operations only last August, JOB has clocked over 1.15 crores already in terms of revenue.

JOB has had validation of its work also in the form of a constant stream of awards and recognitions. “In 2013, we were chosen as the preferred Housekeeping Agency for managing the housekeeping activities at all hospitality and VIP stands of M Chinnaswamy Stadium in Bangalore for the Indian Premiere League matches.”

Vatsa talks about wanting to hire more handy men and women from existing vocational training schools and campuses. “A lot of this will happen as I promote the dignity of labour and working conditions we enjoy at JOB. My other focus is in building a Facilities Management Training Institute that will train young boys who have dropped out of formal education for some reason, to be trained and gain respectable employment.” The social enterprise has its eyes trained to grow the JOB workforce to 500 in a year and 1000 in 2 and a half years.