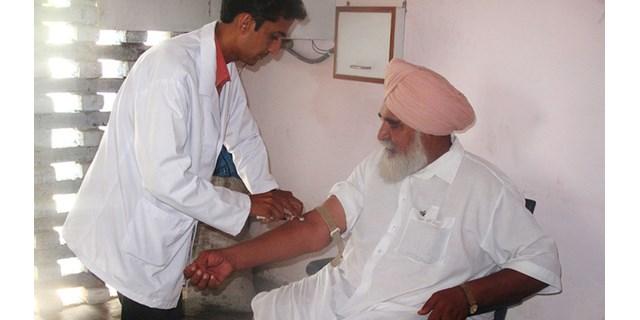 NPR profiles Healthpoint Services, an Indian company seeking to provide adequate and quality drinking water and healthcare services to rural populations globally. Healthpoint Services’ business model is built around videoconferencing, and the provision of inexpensive diagnostic tests and water filters for patients which can be accessed in one central location. In the pilot clinic in India, patients can have a video consultation with a doctor who sits in hospitals more than an hour away. The consultation costs approximately $0.40 and diagnostic tests, which are offered in the same clinic range from $0.20 to $6. The clinic’s location within rural communities so works well for low-income patients for whom it is difficult to travel to a larger hospital or clinic. Healthpoint Services’ water filter subscription service ($1.50 / month for 600 litres of water) has also helped reduce certain health problems by providing clean, filtered drinking water. The company so far has eight clinics that are turning a small profit, and has raised $3 million from traditional investors. Healthpoint Services expects to reach 7.5 million people in India in the next four years and has plans to roll-out pilots in the Philippines and Mexico in 2012.

In rural India, deep in Punjab — about 90 minutes from the Pakistani border — getting clean drinking water is a challenge. Well water often has high levels of dangerous chemicals. Surface water is contaminated with pesticides and agricultural waste.

Getting adequate health care is equally challenging. Government hospitals are often far away, and lines are long.

Here, in places like a dusty rural town called Rajiana, a 2-year-old company called Healthpoint Services is trying to figure out how to bring clean water and health care to rural communities on a global scale.

In a one-story, white-washed building set back from the highway, the company thinks it has developed the answer.

CEO Amit Jain brings a visitor into the pilot clinic, past the pharmacy counter, to an exam room where a patient sits next to a white-coated clinical assistant. They’re talking to a doctor on a video screen.

“This is what the model is all about,” Jain explains. “This is a real-time interaction between the patient, the clinical assistant, as well as the qualified doctor. The doctor is sitting about 200 miles from this place.”

And, according to Jain, the consultation costs 40 cents.

The Healthpoint model combines videoconferencing with cheap diagnostic tests and inexpensive water filtration all in one building. The company believes that in this way it can deliver affordable health care and clean water to the world’s low-income people — and make money doing it.

In another Healthpoint clinic in the tiny village of Mallan, Suba Singh, a tall, broad man, is having a video consultation with a doctor who’s in a city about an hour away.

The doctor advises the patient that the ideal weight for him is 80 kilograms and that he should cut down on his food. He should be having fewer chapatis (Indian bread) — and more vegetables and water. The patient asks the doctor if he should get his uric acid checked, and the doctor says, “Yes.”

To do that, Singh walks down the hall to the diagnostic room. Here, more than 70 different tests are available — ranging in price from 20 cents to $6. Lab technician Navdeep Sharma draws a blood sample and puts it in a centrifuge.

“After we segregate the serum from the blood, we’ll do the test,” he says. “Five to 10 minutes, I’ll give him the results.”

Diagnosing and treating people in a single visit is one key to delivering affordable health care. That’s because a large chunk of health care costs for low-income people is transportation to and from a clinic, and the wages lost during those visits.

Suba Singh is a satisfied customer. He says he was treated at other clinics, but got no relief.

“And I heard about this clinic, and I’ve come here, and there’s a lot of relief after that,” he says. “I couldn’t walk so much earlier — and I’ve started walking after I started visiting this clinic.”

The Water Makes A Profit

But how do you make a profit here? First, says Jain, you need to understand that even low-income Indians spend money on health care. For too long, he says, companies have ignored the opportunity to make a profit meeting the needs of people at the bottom of the economic pyramid.

Jain says the success of Healthpoint’s clean water business offers some evidence the strategy can work.

“More than 50 to 60 percent of households in a village are now becoming our subscribers, so that clearly shows an ability to pay for subscribing clean drinking water,” he says.

A small but sophisticated water filtration plant is the anchor for each of Healthpoint’s clinics. Water is sold for just $1.50 a month for 600 liters — enough to provide for the needs of a family of six. That puts it within the reach of people making just $1 a day. And it has an immediate health impact, says Jain.

“Almost 80 percent of all the disease load in these areas is directly or indirectly being triggered by consuming water that is contaminated,” he says.

In other words, providing clean drinking water could eliminate the vast majority of health problems in this region.

A Healthpoint water truck pulls out to make home deliveries as customers line up to fill plastic water jugs at the clinic in Mallan.

“The village water is very bad. The water is polluted,” he says.

Inder Singh, a farm laborer, has strapped his full jug to his bicycle.

“It’s safe and pure water that they give, and we’ve got relief from the pain, which we used to have in our legs and in our joints,” he says.

That’s because Healthpoint’s high-tech filtration gets rid of the cause of that joint pain — the dangerously high levels of fluoride in this region’s well water.

Jain says despite its low prices, Healthpoint’s water business is profitable, and it provides a constant stream of foot, bicycle and motor-bike traffic to its health clinic each day.

How To Finance Growth

Jain says the eight pilot clinics are making a small profit, but obviously not enough to finance a global expansion, especially because a billion people around the world need these services.

So to finance its growth, Healthpoint has looked to socially minded investors like Charly Kleissner, who’s based in Silicon Valley.

“If you look at the rural population, particularly in India, there is a tremendous need to provide these basic services,” Kleissner says. “We believe that Healthpoint Services has the potential of doing that.”

Kleissner has invested his own money and has joined Healthpoint’s board. His first priority is the company’s social mission — his second, a financial return.

But already Healthpoint has raised an additional $3 million from more conventional investors, whose first priority is a good return on their investment. The risk to the company is that those investors might put maximizing profit above the company’s social mission.

Kleissner argues a profit-making enterprise is the only organization that can amass the resources necessary to meet the challenge.

Healthpoint doesn’t expect to do it all by itself. It hopes to spawn imitators as it proves the model can be effective and profitable.

The company projects that within four years, it will be providing clean water and medical care to 7.5 million people in India. And, it’s set to expand globally, with pilot clinics in the Philippines in January and in Mexico late next year.