Save Every Drop… Or Drop Dead… 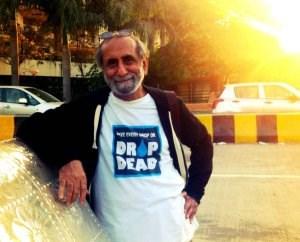 A tap that drips once every second wastes a thousand litres of water in a month. Aabid Surti shows us how easy it can be to keep our future green and blue.

Aabid Surti is an odd character. A few years ago, the angular, bearded author was invited to meet the President of India to receive a national award for literature at a ceremony in the capital, New Delhi. He politely declined. Absorbed in writing the first draft of his new novel, he cited the reason that he did not have time. But what he has made time for every Sunday for seven years now, is going door-to-door in Mira Road, a non-descript suburb of Mumbai, with a plumber in tow, asking residents if they need their tap fixed for free!

As a distinguished Indian painter and author, Aabid has written around 80 books but no story so moved him as the truth about water scarcity on the planet. “I read an interview of the former UN chief Boutros Boutros Ghali,” he recalls, “who said that by 2025 more than 40 countries are expected to experience water crisis. I remembered my childhood in a ghetto fighting for each bucket of water. I knew that shortage of water is the end of civilized life.”

Around the same time, in 2007, he was sitting in a friend’s house and noticed a leaky tap. It bothered him. When he pointed it out, his friend, like others, dismissed it casually: it was too expensive and inconvenient to call a plumber for such a minor job – even plumbers resisted coming to only replace old gaskets.

A few days later, he came across a statistic in the newspaper: a tap that drips once every second wastes a thousand litres of water in a month. That triggered an idea. He would take a plumber from door to door and fix taps for free – one apartment complex every weekend.

As a creative artist, he had earned more goodwill than money and the first challenge was funding. “But,” he says, “if you have a noble thought, nature takes care of it.” Within a few days, he got a message that he was unexpectedly being awarded Rs.1,00,000 ($2,000) by the Hindi Sahitya Sansthan (UP) for his contribution to Hindi literature. And one Sunday morning in 2007, the International Year of Water, he set out with a plumber to fix the problem for his neighbors.

He began by simply replacing old O-ring rubber gaskets with new ones, buying new fixtures from the wholesale market. He named his one-man NGO ‘Drop Dead’ and created a tagline: save every drop… or drop dead.

Every Sunday, the Drop Dead team – which consisted of Aabid himself, Riyaaz the plumber and a female volunteer Tejal – picked the apartment blocks, got permission from the housing societies, and got to work. A day before, Tejal would hand out pamphlets explaining their mission and paste posters in elevators and apartment lobbies spreading awareness on the looming water crisis. And by Sunday afternoon, they would ensure the buildings were drip-dry.

By the end of the first year, they had visited 1533 homes and fixed around 400 taps. Slowly, the news began to spread.

In March 2008, director Shekhar Kapur, who was working on his own water conservation film, heard about Aabid’s efforts and wrote on his website: ‘Aabid Surti, thank you so much for who you are. I wish there were more people like you in this world. Keep in touch with us and keep inspiring us. Shekhar.’

Local newspapers began to write about Drop Dead, which prompted a further flood of grateful emails and spontaneous messages. One of the most heartfelt messages was from superstar actor-producer Shah Rukh Khan, a longtime fan of Aabid’s work as a comic book creator. After reading the newspaper report titled ‘City of Angels’, he wrote to Aabid: “…It sounds like one of the little big things my dad would have done.Strange that I have enjoyed [your comic] Bahadur in my childhood and enjoyed reading your tap story so many years down the line… when I am father myself. God bless you and yes, I believe in angels after reading the newspaper.”

In 2010, Aabid Surti was nominated for the CNN-IBN CJ ‘Be The Change’ Award. In the same year, a television crew from Berlin flew down to follow him on his Sunday rounds which continued come monsoon or shine.

It’s hard to say how much water he has saved with his mission, given that the faucets he fixed could have continued leaking for months, and maybe years, had he not rung the doorbell one Sunday morning. But conservatively, it could be estimated that he has single-handedly saved at least 5.5m litres of water till date.

In the summer of 2013, the state where Aabid lives is expecting its worst drought in 40 years. Months in advance, the Chief Minister Prithviraj Chauhan has warned citizens to begin conserving water. While ministers lobby for drought-relief packages worth millions of dollars, Aabid sees his own approach as simple and inexpensive.

As he rings another door-bell on yet another Sunday in Mira Road, seven years into his one-man mission, he says: “Anyone can launch a water conservation project in his or her area. That’s the beauty of this concept. It doesn’t require much funding or even an office. And most importantly, it puts the power back in our own hands.”