Revolutionising Healthcare For The Poor 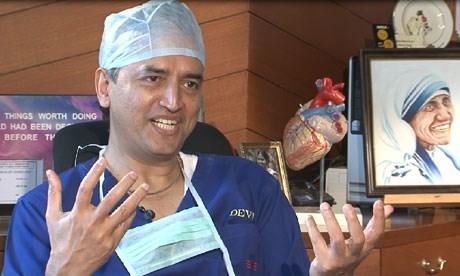 An Indian doctor trained in the UK is planning to open a 300-bed low-cost, high-quality heart hospital in South Indian state Karnataka in order to provide services to the millions of patients that cannot afford traditional care. The doctor plans to offer an insurance scheme in which farmers can obtain coverage for healthcare expenses. He plans to keep costs low through more efficient hospital construction as well as training families on how to care for the patient’s “non-technical issues” while they are at the hospital.

This year heart disease overtook communicable diseases as the number one killer in India, mainly affecting breadwinners. More than 2 million Indians need, but cannot afford, heart surgery. That may be about to change.

While surveying the blueprint drawings of a new 300-bed speciality heart hospital in Mysore, Dr Devi Shetty announces that his facility will be completed within four to five months with a total investment of about $4m. Traditionally in India, such a hospital would cost nearer $30m and take around three years to build. Shetty’s goal is for his low-cost model to make heart surgery accessible to the millions in need.

Originally trained as a cardiac surgeon in Britain’s NHS, Shetty is famed as chairman and founder of the Narayana Hrudayalaya “health city” in Bengalooru, where open-heart surgery costs a fraction of what it does elsewhere in the world. By performing a high volume of operations in his 1,000-bed “heart factory”, Shetty passes on the efficiency savings achieved to patients. He is pursuing a one-man mission to drive down the cost of hospital care. “Today, most diseases can be cured and if you cannot cure a patient, you can give them a meaningful life,” he says. “But what percentage of people can afford it? If a solution is not affordable, it is not a solution.”

In addition to offering low-cost surgery, he treats the most needy patients free of charge by subsidising their care through charging those who can pay a higher rate. He has also set up the Yeshasvini scheme, in which, for five rupees (about $1) per month, farmers in Karnataka state can insure themselves against healthcare expenses. The model is proving to be a vote-winner for politicians, and is being replicated across the country.

In India, around 40% of the population either borrow money or sell assets to pay for hospitalisation, and 25% fall below the poverty line as a result of medical expenses each year. Since 1949, the private health sector has grown from 8% of healthcare facilities to encompass 93% of hospitals and 85% of doctors. Private financing accounts for 78% of total health expenditure – one of the highest proportions in the world.

According to his calculations, this new hospital model will enable him to offer open heart surgery for $800. The cheapest procedures in the US can be 10 times that amount. When asked how drastic cost saving can be achieved, Shetty explains that he has teamed up with the largest construction company in India (Larsen & Toubro), which will be responsible for building the prefabricated hospital. It will be designed solely on ground-floor level because multiple storeys hugely increase the cost of construction. The design allows for good ventilation and maximum natural light, thus reducing power requirements. Essentially, the model is a no frills, Ikea-like approach to hospital design.

His plans also involve DIY-nursing, whereby family members are responsible for looking after the non-technical aspects of care. After comprehensive training on the day of admission they will take over the majority of patient care.

Shetty was surgeon to Mother Teresa, who, he says, taught him that to achieve something big, it need not be complicated. Indeed, his simple model may have the potential to revolutionise the way healthcare is delivered in low-income settings. Narayana Hrudayalaya exudes an aura of simplicity, despite the abundance of state-of-the-art technology and techniques employed there. It is better organised and notably calmer than other hospitals.

Shetty’s vision of low-cost healthcare is not confined to his native country. He believes African healthcare systems need new mechanisms to deliver better care. When he has established his model in India, he plans to take both the model and his expertise to Africa.

“In India, we have hope because we produce the largest number of doctors and nurses in the world,” he says. “We have a built-in capacity to make medicine for the whole world. Our only missing link is the capacity to pay for the healthcare. With micro-health insurance taking off on a large-scale, that will be addressed. But when we look at African countries, they don’t have medical or nursing colleges, so I strongly believe that the western world has to create institutions in Africa rather than giving them money. They should create institutions to train staff and build hospitals… that will be a long-lasting solution to the healthcare issues.'”

Shetty is searching for a local partner and a co-operative government in Africa to undertake a largescale project of this nature. Narayana Hrudayalaya is involved in India’s flagship information technology initiative – the Pan-African e-Network Project. This partnership between the Indian and African governments, and private institutions, allows specialists at his hospitals to share their expertise with doctors in Africa through video-conferencing.

Shetty was a pioneer of telemedicine in India. He recognised that healthcare resources are heavily urban biased, and that people in rural areas faced difficulty accessing quality care. Many people choose to visit unqualified medical practitioners, of which there are estimated to be more than 1.25 million. Despite their lack of formal training and frequent involvement in potentially harmful practices, they are trusted and are often the first and sometimes only source of accessible care for the poor living outside towns and cities.

The Narayana Hrudayalaya group has dedicated telemedicine centres, where patients in remote areas can have consultations with doctors in Bengalooru.

Some may be sceptical as to whether one man can pull off such an ambitious initiative. Dr Shetty admits that it is his most ambitious venture to date. Researchers who studied the effectiveness of micro-insurance in India concluded that Shetty’s charisma and reputation were key to the success of the Yeshasvini scheme, and no doubt these factors will play their part in translating his vision for low-cost healthcare into reality. His ideas have the potential to provide services once thought too expensive, or too complex, to many low-income regions of the world, and is worthy of close scrutiny by the development community.