Reaping The Profits Of Social Change 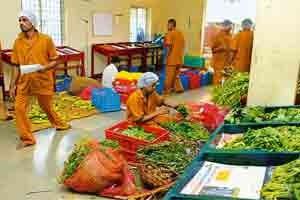 A growing number of Indian businesses are adopting models to generate a social return while turning a profit by Malia Politzer (malia.p@livemint.com)

“This is our Wipro, our Infosys and Tata,” Subramanian says, gesturing at each in turn. “We have top business school graduates who plot their prices like they’d analyse the stock market, which is how we can guarantee a good price to our clients.”

Farm focus:A distribution centre of eFarm in Chennai. Photo: R. S. Kumar/Mint
Around him, men in brown uniforms are sorting through blue and red milk crates of produce, carefully picking out the spoiled specimens and arranging the rest by size and quality.
“We treat everyone in our distribution chain like they’re from the Fortune 500—whether they’re a big hotel chain or a farmer,” Subramanian says.

The Chennai-based start-up streamlines the rural-to-urban supply chain through a combination of technological innovations and on-the-ground logistics while providing farmers the tools to help them improve the quality of their produce and reliability of their yields, allowing them to earn higher profits.

It does so by networking with local non-governmental organizations and agricultural universities to get farmers up-to-date information on farming techniques, training and access to reliable labour pools.

Farm focus: Venkat Subramanian, co-founder and managing director of the venture. Photo: R. S. Kumar/Mint
Currently, Subramanian explains, the bulk of India’s agricultural produce reaches the consumer through an unreliable and informal chain of middle men, each of whom takes a cut of the proceeds, leaving farmers vulnerable to exploitation and resulting in unstable prices and unreliable quality.
“Farmers’ problems begin the moment their harvest ends,” says Subramanian.

“When I was in the US, I saw that India has the potential to apply the same sort of technology and processes that are used in the US to some of the basic issues here in India—and that it could be profitable,” he says.

His solution was eFarm, which, only in its third year, has broken even. Subramanian estimates it will start generating profit from November.

eFarm is one of a growing number of Indian businesses that are adopting models to generate a social return—traditionally the realm of NGOs, strategic philanthropy and corporate social responsibility (CSR) initiatives—while also turning a profit.

It is one of the 12 businesses highlighted in a report launched on Thursday by FSG, a non-profit consulting firm, on how Indian companies are “creating shared value”, or CSV, a concept first coined by Harvard professors Mark Kramer and Michael E. Porter ((co-founders of FSG) in an article published in Harvard Business Review earlier this year.

The FSG report examines how companies across the agricultural, financial and health sectors are choosing to bypass traditional strategic philanthropy or CSR initiatives, instead harnessing their core business strengths to provide goods and services to the so-called bottom of the pyramid, or the largest and poorest socio-economic grouping.

If done right, the approach could provide a more sustainable alternative to CSR by allowing companies to generate a profit even as they do good.

“One of the benefits of CSV is that you are harnessing the companies’ assets, which CSR —or philanthropy—may not do,” says Deval Sanghavi, co-founder of Dasra, an organization that networks philanthropists with NGOs.

“You are bringing the same discipline and professionalism to the product or the service as you would to any other product or service that the company is launching, which ensure that you are using the entire company’s organizational strength and experiences.”

Not your typical CSR

While the concept that businesses should take an interest in social development and actively give back to their communities is not new to India, corporate contributions have remained generally limited to strategic philanthropy or CSR initiatives, aimed at generating purely social (rather than financial) returns.

“CSV focuses on finding the business opportunities hidden in social problems,” Porter writes in the introduction to the FSG report.

“Issues like poverty, pollution, and poor health are not externalities to be dismissed, but rather core business concerns that have a substantial impact on growth and operational efficiency.”

By addressing social issues as part of their core business strategy, Porter suggests, companies can generate sustainable business solutions to social problems while simultaneously creating long-term value for the company.

“The CSV practices themselves aren’t new. But by naming the approach and encouraging companies to make this the norm for how they make strategic and operational decisions, companies can better integrate this in their core business and realise the benefits more consistently,” says Veronica Borgonovi, one of the report’s writers. “Rigorously assessing both the economic and social impact makes for a more powerful approach that can create the most value over time.”

Some companies highlighted in the report have already adopted these strategies with promising results:

In 2007, drug maker Novartis India launched a programme called Arogya Parivar in an effort to reach rural markets, representing 67% of the population but only 17% of pharmaceutical industry sales.

While it started as a CSR initiative, Arogya Parivar is now profitable. In 2010—after only three years—it broke even. Since its inception, the programme has more than doubled in size, providing health education and medical access to more than 42 million patients in 28,0000 villages, according to the report.

Other examples highlighted include low-cost medical devices built by General Electric Co. for rural markets, and Vaatsalya, a no-frills, for-profit hospital chain launched by a former medical student to provide healthcare to rural markets, and efforts by banks and banking correspondents to deliver financial services to underserved communities through mobile technology.

eFarm founder Subramanian found he was able to radically increase productivity by using low-cost technical solutions and tapping an underused pool of talent—people with disabilities.

One of his first stumbling blocks was finding people to staff his back-end operations. “No good IT graduates were interested in working for an agricultural start-up,” he says.

So he hired highly trained people who also happened to have disabilities. His office manager Rajender is blind, as is his computer programmer, using inexpensive voice-reading software to help read emails and work online. A number of staff—coconut shuckers—for example—have polio.

“I find them to be much more productive and loyal, and they inspire the rest of my staff,” Subramanian says.

While the concept of shared value may have originated in the West, Indian companies may be uniquely positioned to adopt it as a business strategy.

India is in the unique position of having both one of the highest economic growth rates in the world—next only to China among the major economies—and some of the greatest social needs. India also has a growing number of billionaires, besides a rapidly expanding middle class.

Despite such growth, India has the dubious distinction of having among the highest malnutrition and maternal mortality rates in the world. It’s also beset by poor urban planning and deficient infrastructure.

“The long-term is becoming the short term,” says Gaurav Gupta, the regional director of Dalberg, a strategic advisory firm that provides consulting advice for companies and NGOs attempting to address global challenges.

“As wealth has grown; people have become a lot more attuned to the disparities. As a part of job satisfaction, companies’ own employees are starting to think about how the company they work for affects the local community.”

Indian companies have a further advantage in that many of them are family run, and are thus better able to plan for long-term growth.

“CEOs can turn around every 3-4 years,” says Kramer. “Family-run businesses are uniquely positioned to look at long-term returns.”

BH Jain, founder of Jain Irrigation Systems Ltd, one of the largest food processing and drip irrigation companies in India, recognized early on that he would have to address some of the fundamental problems plaguing farmers if his company was to be successful.

His solution was to adopt a contract farming model, cultivating relationships with individual farmers to source his produce, and providing them with the resources to increase the quality and reliability of their produce—training, drip irrigation systems, fertilizer, expert advice and developing technology to help farmers become more efficient.

To inspire loyalty, he guarantees farmers a minimum price for their produce, but will pay the market price if it is higher.

“In the short-term, I may make little or no profit, but over 10 years; that relationship is sustained. My farmer will have bought a two- wheeler, he will have sent his son for higher education, and he will have built a home,” says Jain.

But Sanghavi cautions that companies should not see CSV as a silver bullet.

“No company or individual should think that this is the only answer towards development,” he says. “There’s still a very big role for non-governmental organizations, CSR and philanthropists to play, and market-based principles can only benefit people who have access to markets—and unfortunately not everyone in our country does.”