Pathbreakers: Why Rajeev Kher Gave Up His US Job To Sell Portable Toilets 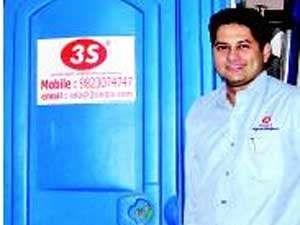 An Economic Times article recently profiled Rajeev Kher’s work in setting up Shramik Sanitation Systems, a portable toilet installation and maintenance company. Kher started Shramik in 1999 after graduating from a Pune university with his MBA. Having understood the need for sanitation solutions in India, Kher established Sharamik to run as a for-profit business in order to continue serving large numbers of people. He has applied an inclusive growth-pay and use model. Shramik currently has 3,000 toilets running and has plans to scale its presence in seven cities to 30 over the next few years.

After Rajeev Kher, MD, Saraplast (Shramik), finished his MBA from Symbiosis, Pune, his family and friends expected his internship in the United States to be a stepping stone to a great corporate career. He stunned them all by giving it all up and coming back home to sell portable toilets. Here’s why.

Over 1000 children die everyday in India because of the lack of sanitation, and this is something Rajeev Kher wanted to change. Sanitation is a basic need that is denied to a large part of the population, 25% of urban India lives in slums, and the facilities at best are minimal. When he saw portable toilets being used in the United States, he saw the potential impact something like this could have in India.

The company leases out the toilets to whoever needs them, and follows it up with the maintenance as well. They work with NGOs, municipalities and companies to set up portable toilets at un-served sites. These range from slums to construction sites and events. The basic shell is imported, while all the other parts are made at Saraplast’s factory. The company is now running a pilot where it works in collaboration with local NGOs to set up and maintain these toilets in slums. Next on his wishlist is a collaboration with the Government which will really give the business the kind of scale it really needs.

Founded in 1999, the company has been recognised as one of the 50 Social Enterprises in India which is making a difference to the lives of the people. Global recognition has come in through the Clinton Global Initiative. The company has also been chosen for a business innovation facility by the British aid group Department For International Development (DFID).

Profits with a conscience:

Kher is clear that he will follow an inclusive growth-pay and use model. “We decided right at the beginning that if we are to run this as a business, there has to be a profit motive,” he says. Two years ago, micro venture capital fund Aavishkaar India invested in the company. The company currently has 3000 toilets, and between 15,000-18,000 services a week. The plan is to scale it up from the current seven cities to 30 over the next few years. The business opportunity, based on back-of-the-envelope calculations, is about Rs 600 crore.

Kher started the company fresh out of B-school. “Many of my batchmates are CEOs and senior VPs, but the thrill that comes from doing something on your own is totally different. Sure I may not make as much money as my friends, but the satisfaction is immense,” he says.