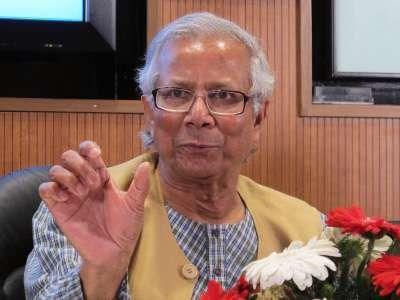 Father of microfinance, Muhammad Yunus, has partnered with India’s Indian Institute of Management , Ahmedabad (IIM-A) to start a $10 billion seed fund for social businesses in India. In setting up this fund, Yunus is promoting his brand of business, in which dividends are not paid to shareholders, but are instead put back into the fund. IIM-A’s Centre for Innovation Incubation and Entrepreneurship (CIIE) will work with the Mumbai-based arm of the Grameen Creative Lab (GCL) to create a mentoring network and incubation program for social businesses. Yunus seeks to raise the fund through Indian corporates and philanthropic foundations.

MUMBAI: Professor Muhammad Yunus, the father of microfinance and chairman of the Yunus Centre in Bangladesh, has finally found a taker for his brand of social businesses in India. He is joining hands with the Indian Institute of Management, Ahmedabad (IIM-A) to float a Rs 50-crore fund to seed social ventures.

He will help raise the corpus and mentor social entrepreneurs. “I am in talks with several industrialists (in India),” Yunus said. He met some of Mumbai’s biggest industrialists during his visit to the city this week.

For the uninitiated, Yunus defines a social business as one that pays no dividend to shareholders, but ploughs all profits back into the company whose purpose is to serve social needs. “It’s a new class of non-dividend business done in a serious way to solve social problems,” he said.

Yunus has pioneered many such social businesses, including a JV with Danone that sells fortified yoghurt to poor children for 6 Bangladeshi Taka; Veolia that sells clean water to 100,000 people across five villages for 1 taka (for 5 litres); and a third JV with chemicals multinational BASF that sells long-lasting insecticidal nets and multi-micronutrient sachets to the poor.

His alliance with IIM-A fructified after one year of discussions with its Centre for Innovation Incubation and Entrepreneurship (CIIE).

We are exploring a collaboration with Yunus to build a stronger ecosystem to support fledgling entrepreneurs who are creating innovative solutions in the social sector,” Rakesh Basant, chairperson of CIIE and professor of economics at IIM-A, said.

The CIIE has been involved in incubating early-stage enterprises across the healthcare, education and livelihood space. They will collaborate with the Mumbai-based arm of Grameen Creative Lab (GCL).

GCL, which seeds social businesses, is a joint venture between the Yunus Centre and circ-responsibility, a consulting company in Germany.

The CIIE and Yunus will collaborate to create a strong mentoring network, an incubation program to be designed by GCL to help entrepreneurs identify and build viable social business options.

The CIIE’s initial idea was to raise a Rs 5-10 crore fund, Basant said. But Yunus raised the bar with the proposal for a Rs 50-crore fund. “Fund-raising has not started yet and we don’t yet know how much we will be able to raise,” he added.

This is the Nobel Laureate’s second visit to India in the past 26 months. He has been building the case for Indian industrialists to start social enterprises that do not return profits to shareholders. None has responded yet. Hence, the plan for a Rs 50-crore fund. Yunus hopes to raise the corpus from Indian corporate and philanthropic foundations.

“Rich industrialists in India prefer charity than investing in business without any return expectations,” says Vineet Rai, founder and CEO of Aavishkaar, which invests in social impact enterprises with a profit motive. India as a country has only now started discovering the risk-reward paradigm and it will be a few more years before the Yunus model will find takers, he said.

Anu Aga, director on the board of Thermax, a $1-billion engineering solutions company, who met the professor in Mumbai last Sunday, is intrigued by the model but is not yet ready to try it out.

There are some exceptions, though. Recently, Piramal Group Chairman Ajay Piramal and Dr Reddy’s Laboratories Founder K Anji Reddy independently started working on social businesses similar to the Yunus model. Reddy’s project provides villagers with pure drinking water. Piramal has a low-cost healthcare delivery model and a rural BPO. Both do not expect returns, but plough profits back to scale up the businesses.

Yunus’ personal journey in this sector has been long, and controversial in the recent past. On April 2011, Bangladesh’s highest court dismissed Yunus as managing director of Grameen Bank, the path-breaking microfinance institution he founded. But Yunus is undeterred and has set up three international joint ventures and about eight social business enterprises over the last five years.