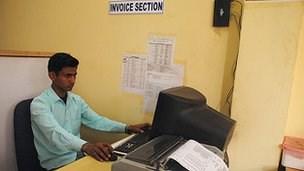 United Villages, a rural supply company operating in Rajasthan, India is working to connect villages of less than 5,000 people with consumer products and services that have long been inaccessible by villagers. Leveraging mobile telephone networks, United Village field staff take orders from local retailers and use a mobile phone application to wire the orders to a central warehouse, which then packages the goods and distributes them back to the rural retailers. Though the operations in Rajasthan are still in their early stages, the company hopes to soon expand to approximately 36,000 rural retailers across the state. By Nidhi Dutt Mumbai Correspondent, BBC News, Rajasthan

Lawan is a long way from nowhere. The remote village is dry, hot and dusty. It is still morning, but the sun is already burning.

The small village lanes are quiet, almost deserted. Only the brave venture into the harsh, radiating heat.

Glowing barbs of white sunlight bounce off the small, mud-brick buildings. The closest market to this village is nearly 40km away. The best way to get there is on a slow-moving tractor. These are not ideal conditions for a spot of shopping in rural Rajasthan.

For many years, rural India has been a somewhat untapped market for consumer goods and services companies.

Big and small, Indian and foreign, many have tried to set up shop, but few have had lasting success.

Hundreds of millions of Indians call rural and remote India home. Many of them live and work in tiny, obscure, off-the-map villages. In recent years, the big consumer goods companies that produce everything from toothpaste to crisps have established a presence in small and mid-sized towns and districts. However, few have been able to establish direct contact with villages of 5,000 people or less.

United Villages, a new rural supply company operating in Jaipur in Rajasthan, believes it can fill the gap in rural India’s supply chain and get big brands to even the smallest of villages.

The company claims that by combining the use of existing infrastructure with rural marketing and wireless applications, it can turn a $7.4bn opportunity into a rural retail reality.

Chintan Bakshi, co-founder and chief operating officer of United Villages, says that multi-brand firms like Hindustan Unilever are able to reach out to rural India through rural-facing incentives and schemes. However, for small and mid-sized companies, the economics of operating in rural India do not, at present, make good business sense.

Mr Bakshi adds that the outsourcing of distribution by big companies means that smaller areas that fall outside targeted districts or regions are seldom tapped as potential sales areas. Experts have long said that technology will play a critical role in getting products, services and assistance to remote India. If done correctly, many argue, it could open up a potential consumer market of hundreds of millions of people. And not least, connect big brands with the smallest of villages, all at the push of a button.

For nine months, United Villages has been operating in rural areas around Jaipur in Rajasthan. So far, it has built a distribution network that caters to more than 700 rural retailers.

The company says the concept is simple: field staff take orders from retailers, wire them via a mobile application to a central warehouse, and products are delivered to local corner shops and stores, neatly packed in boxes. This, they say, is modern-day door-to-door service.

Mr Bakshi says the proliferation of mobile phones in rural India has made providing a service like this possible.

Furthermore, reliable phone connections and networks have made establishing a mobile supply network in Rajasthan relatively easy. However, doing business in remote areas, he warns, is far from easy.

Mr Bakshi claims that one of the biggest challenges is hiring and retaining staff with good local knowledge and an ability to incentivise the use of new products and make bigger sales. Mahesh Sharma, a United Villages representative, travels from shop to shop in Lawan village, a little over an hour away from Jaipur. He says at first, retailers hesitate to buy new products and stock unknown items on their shelves. But he adds that once they get used to the system, retailers begin to appreciate its benefits.

According to the firm’s own research, retailers in Indian villages with a population of less than 10,000 people usually have to leave their immediate areas to procure 81% of their stock.

Mr Sharma says that before United Villages began its mobile supply operations in rural Jaipur, retailers had to shut their shops and travel 30 to 40km to the nearest market to get supplies.

That, he says, used to waste valuable time and lead to a loss of sales. Now, he claims, vendors can have products delivered right to their doorstep in a cost-effective manner that makes operational sense.

Retailers such as Vinod Kumar Vati from Baswa village say it takes a lot to convince rural consumers of the benefits of trying something new.

Checking inventory lists in his small corner store in a quiet, cramped lane, Mr Vati says his customers like to stick to what they know. Be it cleaning powder or sweets, he says his customers insist on product guarantees. Doing business in rural India, face to face or through mobile technology, is all about building trust and sustainable relationships on the ground.

Sales representatives and retailers agree that it may be some time before the consumption patterns of rural India begin to look like those of the country’s big cities.

However, mobile technology may be the first step towards opening up potentially large and lucrative pockets of consumers to big retail business.

In recent years, the race to reach rural India has picked up pace.

Companies big and small, as well government-driven programmes, have been moving deeper into the country’s hinterland in a bid to generate more business and connect customers, vendors and industries together via mobile technology.

From real-time mobile phone alerts updating farmers on the price of crops, to business correspondents taking portable banking to rural households, mobile technology is being used to unlock a potentially large and lucrative consumer base.

However, when it comes to bridging gaps in the rural retail supply chain, United Villages claims it is not facing any direct competition. Mr Bakshi says that some microfinance firms have piloted similar concepts in South India, but so far, they hold a unique place in the country’s retail landscape.

Mr Bakshi insists that demand is not a problem, but bottlenecks in the supply system are.
Big plansIt is still early days for United Villages, but the company already has big plans for expansion.

By the end of the year, Mr Bakshi hopes to have four operational hubs dotted across Rajasthan. Using them as bases to supply rural areas, United Villages aims to reach out to around 36,000 small retailers across the state.

This, he adds, could then pave the way for expansion of the mobile retail model into surrounding states.

There is a growing desire among people in rural India to be part of the country’s modernisation process, which includes the provision of modern goods and services.

Experts claim that if mobile technology in rural India remains progressive and accessible, and if supply networks on the ground are built to last, more big brands may find themselves doing big business in places they may not have endeavoured, or thought, to visit before. http://www.bbc.co.uk/news/business-12841993