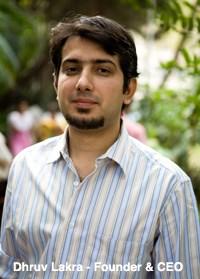 Sustainability platform Just Means recently profiled Miracle Couriers, an Indian social enterprise that hires and trains deaf women and women in India to provide courier services. Having started the company in January 2009, Mirake Couriers’ Founder, Dhruv Lakra, has since started two branches in Mumbai, works with 20 deaf women and 44 deaf men, and delivers more than 65,000 packages monthly. Lakra set up the operation such that the women are responsible for data entry, tracking, sorting, and scanning packages while the men act as courier agents across Mumbai. The model enables employees to rely on their heightened visual senses, while communication between agents and couriers is undertaken through text messages. Mirakle Couriers intends to expand to other cities.

Meet social entrepreneur Dhruv Lakra, CEO and founder of Mirakle Couriers, a profitable social enterprise which employs the deaf community in India. Dhruv started Mirakle Couriers in January 2009 and has since been honoured with the CNN – IBN Young Indian Leader Award for 2011, becoming an inspiration to many. The company employs a team of 64 deaf employees, where each of them has gained confidence and been empowered with financial independence.

Mirakle’s company motto is ’empathy, not charity’ and as a result, many of its employees are now able to return home and support their families rather than being helplessly dependent on them.  The company’s operations are run by 20 deaf women who are responsible for data entry, tracking, scanning, sorting and other branch functions. In the field there is a team of 44 male deaf courier agents who navigate the complex lanes of Mumbai. They travel on public transport, avoiding traffic and remaining aware of their surrounding environment. Dhruv Lakra combined his education with his business experience and social network to come up with this unique social enterprise.

This idea to create a social enterprise for the deaf was triggered by an experience Dhruv had while travelling on a bus in Mumbai, where he sat next to a young boy who seemed lost. Dhruv asked the boy where he was going, but the boy did not respond. It took him a few seconds to work out that this boy was deaf. Dhruv took out a piece of paper and wrote asking the boy in Hindi where he was going; it took a several pen and paper exchanges for Dhruv to realise how difficult life was for the deaf. Deafness is an invisible disability with little public support and hardly any government support for this community in India, particularly when it comes to employment.

After Dhruv came up with the social enterprise business concept for Mirakle Couriers, he spent the next few months exploring the deaf culture and learning Indian Sign Language. He focused on a courier service because it requires a lot of visual skills with no verbal communication, and the deaf are extremely good at map reading, remembering roads and buildings, because they are more visually inclined.

Over the last two years Mirakle Couriers has grown to operate two branches in Mumbai, delivering over 65,000 shipments per month and plans to extend it services to other Indian cities. The company has won several awards, including the 2009 Helen Keller award and the 2010 National Award for the Empowerment of People with Disabilities. Communication between Mirakle field agents and branch staff is done through mobile texts; the text message has been a wonderful technology advancement for the deaf, allowing them the ability to communicate over long distances. This way of communicating has been very effective and part of Mirakle’s success…a simple text has become part of the process to help empower the deaf.