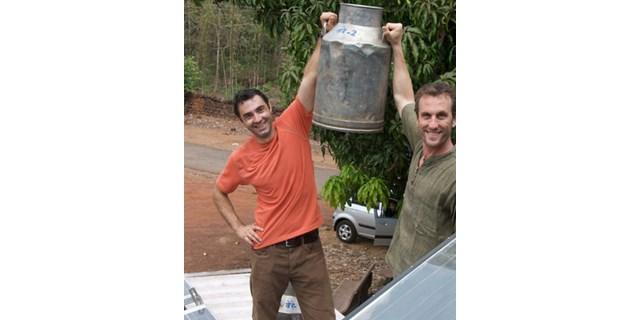 Boston-based company Promethean Power plans to further develop its innovative milk refrigeration system for countries in which temperatures regularly go above 100 degrees Fahrenheit and have inconsistent power supply. The company recently received a grant from the National Science Foundation to continue building the system. Countries like India, where there is both high levels of milk production and consumption, are Promethean’s target market.

That’s the unofficial slogan for Boston-based Promethean Power Systems, a company that this month received a grant from the National Science Foundation to further develop its innovative milk refrigeration system.

Promethean’s target market is India, though it plans to expand to Africa and Latin America as soon as February. India is the world’s largest producer and consumer of milk; the country is home to some 70 million farmers who contribute to a multibillion-dollar dairy market.

Because temperatures can reach 100 degrees during peak summer months, raw milk begins to spoil within hours of collection. And India’s frequent blackouts, due to a strained power grid, make it difficult to keep milk cold enough.Enter Sam White and Sorin Grama, cofounders of Promethean, who have found a way around this problem by creating a system that’s partially off the grid. By using solar power — India has 250 to 300 sunny days a year — dairy processors receive a constant flow of energy, which means a steadier and fresher supply of milk.

With a more efficient and reliable system, processors can collect milk from farmers every other day, which means huge savings in transportation costs in addition to the savings from milk that would have gone bad. With traditional refrigeration systems that rely on electricity, 50 percent of milk spoils from inadequate insulation.

“We were like, bingo! That is a big problem we could solve,’’ said White, recalling an initial conversation he had with S. Sunder Ram, managing director of Bangalore Dairy.

White and Grama first came up with the idea during a 2007 scouting trip to India. White had quit his job and Grama had recently graduated from the Massachusetts Institute of Technology’s System Design and Management Program. With a $10,000 runner-up prize from the MIT $100K Entrepreneurship Competition, they set out to find inspiration abroad.

“It was a serendipitous moment,’’ Grama said of meeting Ram. “We were in India looking for business opportunities when Sam cold-called Bangalore Dairy and they said: ‘We have a problem with milk chilling; come on over and we’ll tell you all about it.’ So that changed our careers and, we’ve been focusing exclusively on this market ever since.’’

The entrepreneurs have been championed by Mayor Thomas M. Menino, who called their idea “impressive’’ during a visit to their new office space last week. The mayor commended Promethean and other start-ups that occupy space at 337 Summer St., saying, “I have great faith in what you’re going to do.’’

Last year the pair won the GE Ecomagination Challenge, and they’re up for a $50,000 Ashoka Changemakers award honoring social innovation.

But one of Promethean’s biggest hurdles is the cost. The solar-powered chilling system sells for $12,000, with the first successful prototype up and running in Tamil Nadu in southern India.

“The feedback has been that it’s beautiful but it’s too big and it’s too expensive,’’ said White.

So they have created a new model — the Rapid Milk Chiller, which relies completely on electricity, reducing the price by nearly 75 percent. This simple, more affordable version will sell for $3,000 to $4,000, making the system vastly more accessible for small dairy processors.

“This NSF grant will enable us to do more research on reducing the cost,’’ said White. The cofounders said down the line they may be able to better reincorporate solar technology. “We still haven’t lost the dream for solar.’’

Lindsey Hoshaw can be reached at lhoshaw@gmail.com.  White and Grama’s system runs on nine photovoltaic cells, which store enough thermal energy to chill milk for a day. First, milk is poured into a rapid chiller — a suitcase-sized stainless steel box, which cools the raw milk immediately to preserve its quality. The milk is then further chilled and stored in a cylindrical slow cooler, which can cool and store up to 500 liters of milk for 48 hours. From there, the milk is picked up by processors to be pasteurized and prepared for distribution.

The entrepreneurs have received positive feedback from clients and potential clients. “Promethean Power’s milk chiller will enable Gokul to reach isolated dairy farmers who have never sold into the organized dairy industry,’’ said Dattaray Ghanekar, managing director of Gokul Dairy in Maharashtra, in an interview with India’s Business Today magazine.