Living In The Shadow Of Prosperity: Why Children In Rural India Don’t Go To School 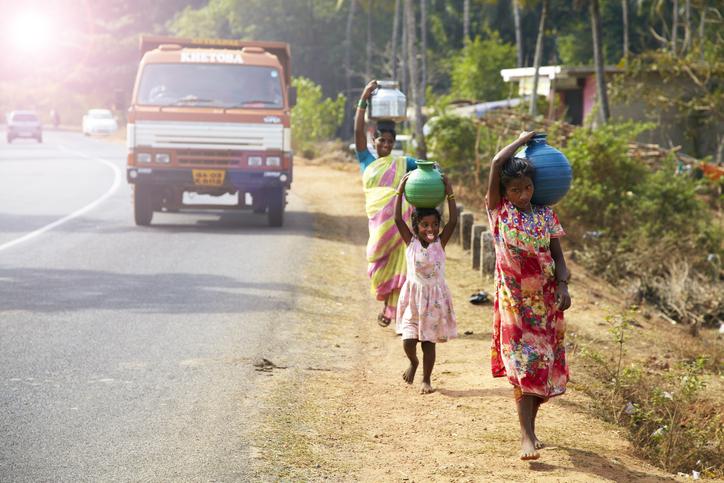 Diya Gupta from the Guardian reports on the problems of illiteracy and why children in rural India do not attend school. The various reasons children are not sent to school include: hunger and starvation, the costs of textbooks, uniforms, and shoes, and lack of awareness of the importance of education in poor families. More often than not, schools lack adequate physical infrastructure such as toilets, electricity, and running water, and also lack adequate resources such as trained teachers and appropriate learning materials. Gupta emphasizes the need for the education of parents and making connections between nutrition and education. She explains that if the government can provide free meals to hungry students, it could keep them coming back.

Madhumita Banerjee is the new head-teacher of a government-run school in Banipur, West Bengal, close to India’s border with Bangladesh. Being a teacher and educator for 30 years has not been enough to prepare her for this schooling experience in rural Bengal. “I have never witnessed poverty at such close quarters,” she explains. “Seeing children unable to study because they are dizzy from hunger makes me very uneasy about my own comforts. How can I eat my lunch when they don’t have any?”

Twenty-first-century India often resembles the Dickensian tale of two cities. For some, it is the best of times; for millions of others, living in the shadow of prosperity, survival is a daily struggle. The levels of inequality are staggering. While India’s economy continues to soar, with the IMF projecting its growth rate to be 8.4% in 2011, West Bengal remains one of the poorest states in the country. Nearly 11% of families in West Bengal face starvation during several months of the year. Small wonder then that parents – who work as domestic servants, rickshaw drivers, hawkers on local trains and in other unskilled occupations – are keen to take their children out of education and send them to the Employment Exchange. Teenagers can be enrolled here with a certificate stating that they have been educated up to 14 years. These parents are often illiterate themselves.

“Illiteracy is receiving minimal political attention and remains a global disgrace, keeping 774 million adults on the margins of society and around 72 million children out of school,” declares the UNESCO report on Literacy Initiative for Empowerment (LIFE). Madhumita has to plead with parents to not stop their child’s education. Parents, in turn, plead their purses. The 2010 Indian Right to Education Act asserts that free and compulsory education is the right of all children between six and 14, but there is no state or central educational funding for the Banipur school after a child is 14. The costs, however, keep mounting – new textbooks required each year, uniforms becoming patchy and outgrown, cloth shoes ripped in navigating country lanes and potholed roads, and monsoon ravages taking their toll. The cost of food is also a prohibitive factor. In 2009, the BBC reported that food prices in India were at a 10-year high, with the prices of pulses, rice, wheat, milk and potatoes having risen sharply. The “global disgrace” of illiteracy and its corollary, unfinished secondary education, has strong links to poverty and malnutrition.

A primary school in a village in north-eastern India has 55 students between the ages of four and 14. It comprises a single room without water or electricity, with the prescribed textbooks set at too advanced a level. The pupils write with a limited supply of chalk and slate, and the youngest children require feeding, washing and medical attention. The school has one untrained teacher. The drop-out rate, unsurprisingly, is 72%: children in rural India do not think that education is important or necessary when a large proportion of them cannot feel its benefits.

Yet a UK Department for International Development (DFID) research project asserts that primary education in developing countries is of enormous value. It builds a capacity for lifelong learning in individuals – the knowledge, skills and attitudes that contribute to general community development germinate here. Kofi Annan, when he was secretary-general of the United Nations in 1999, realised its economic significance when describing girls’ education as the “single highest returning social investment in the world today.” Statistics from charities such as Plan and Camfed demonstrate the transformative potential of education across the developing world. In Africa, if a girl finishes secondary school, she is three times less likely to contract HIV/AIDS, will earn up to 25% more income, and will possibly have a smaller and healthier family, in which she will be willing to invest up to 90% of her earnings. Schooling projects in the “poverty corridor” of Honduras have the long-term aim of benefiting communities from the growth of an educated younger generation that can create local business initiatives, provide work opportunities and boost the labour market.

But many rural Indian children clearly feel a disconnect from education. Most are first-time learners without any role models, which can be discouraging. “Children must learn to learn,” says Madhumita. “Only a patient and committed teacher can bring the right blend of discipline and engagement to classes.” In his report to the Global Campaign for Education, former prime minister Gordon Brown agrees, “Because no education system is better than the quality of the teaching it provides, it is essential that teachers are properly trained, well motivated and equipped to ensure that children learn.” Of equal importance is infrastructural support – adequate toilets, sufficient classrooms and desks, textbooks and teaching aids, fully equipped kitchens, and safe conveyance to and from school, especially for girls. Where families do not realise the value of learning, the school has a greater social responsibility in demonstrating how effective education is in breaking the bonds of poverty. This integrated approach in reflected in Plan’s ‘Quality Education Programme’, currently operating in 150 schools worldwide, which has increased parent participation and student enrolment, and seen a consequent decrease in drop-out rates.

“Parents need education too,” believes Madhumita, “but social prejudice is rife in India. Rural parents see city-educated teachers as unapproachable; teachers often view villagers as incapable of learning simply because they come from rural areas. We have to bridge such divides.” She also believes in the important connection between nutrition and education: when children are sent to school hungry, one of the best policies to retain them is by providing free meals. She recalls the time when she shared her sandwich lunch with two students. “I hadn’t realised how strange a sandwich must seem to a rural Bengali boy,” laughs Madhumita. As they headed for the playground waving this exotic food item, the boys were quickly surrounded by admiring schoolmates. They don’t know it yet, but after the summer vacation, free school meals in the form of the more familiar rice, lentils and vegetables will be available to them everyday. Hope, in the form of a government meal grant, is on its way.