Journey Of A School Dropout To A Supervisor 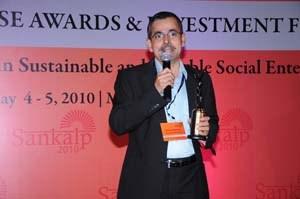 Beyond Profit magazine outlines an example of an Indian boy who benefited from the services of Pipal Tree Ventures. The company offers “vocational training to unemployed youth in rural India.” Anil Kumar, a school dropout from village Gora Bazar in Uttar Pradesh, went from being a labor earning less than INR 2,000 per month to become a supervisor earning INR 10,000 per month.

In the early morning hours of April 27, 2009, five students woke up the head of Pipal Tree Ventures’ training center in Uttar Pradesh by banging on his door. Just days earlier, the students were given jobs at a reputed construction company in Chennai. The boys had returned. They did not want to work in Chennai.

I remembered one of the boys. Just 10 days back, I shook hands with Anil Kumar and wished him good luck for his first job. I had been impressed by the spark in the boy. My trainers told me that he was from a poor family and lives in a hut in the Gora Bazar village.

Luckily, we just had gotten another order from a construction company in Rajasthan. I asked the training center head to speak to them, and if they are ready to work in Rajasthan, then send them to Shahpura, Rajasthan. To my surprise they agreed promptly.

After a week, I had to travel to Delhi and decided to go to Shahpura and meet Kumar and his friends at work. When I reached there, Kumar cheerfully greeted me. I asked him how they are doing. He said, “Sir, it is great. We have clean water, clean air and sufficient food. This is what we want. In Chennai, the water was contaminated. They used to use the same bucket for toilet and drinking water. Kumar was earning INR 4,500 (US$100) per month.

Just a few months later, Kumar was managing a team of 10-15 workers.  One day, my phone rang. It was Kumar.

“How much are you earning,” I asked.

“Anil, you need to show some patience. As you start managing more people and delivering more, your earning will go up,” I said.

And I was not wrong. Starting December 2010, Kumar is managing a team of 40 workers and is earning salary of INR 10,000 (US$220) per month. For a boy who was earning INR 2,000 (US$44) per month as a laborer, this is five times his income within 18 months. Kumar was also awarded by Sonia Ghandi. He wore his best shirt and rehearsed the sentences he would speak to her.