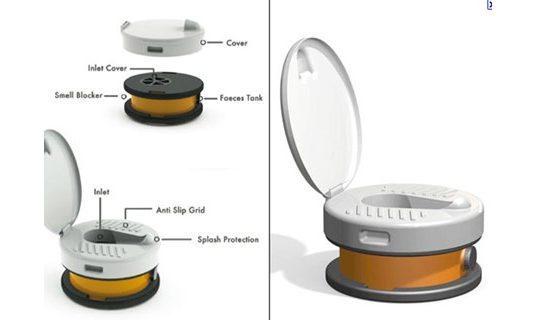 An Israeli designer has created a green toilet for Indian slums. The toilets are designed to use minimal water, hold waste for up to a week, and be easily transported to waste collection sites and biogas plants where waste is traded for energy. The designer, Noa Lerner, is partnering with Indian non-profit Sulabh to pilot the toilet in New Delhi. While other industrial designers merely tweak the appearance of the latest electronic gadget to make minor improvements to trivial point-of-sale appeal, Israel’s Noa Lerner, a Berlin-based industrial engineer, is developing a much more crucial necessity: a mobile public toilet for third world urban slum dwellers, with applications anywhere they are threatened by untreated wastes.

Lerner was struck by the existence of the problem on a trip to India, finding that even the centers of large cities had no public toilets. It is even worse in slums, where no sewage system exists.

The design that she created at her company Morph Design, involves a top that resembles the familiar toilet bowl, placed over a removable container covered with a plastic layer with odor-repellant and anti-bacterial substances. A very small amount of water is used to rinse the top bowl.

These nearly waterless green toilets could be emptied like chamber pots, but with a difference. About once a week, these could be rolled (securely closed of course!) to a neighborhood collection facility.

Each of these toilet barrels is sealed and nano-coated in a way that allows them to be used for a week at a time without emptying or cleaning.

Once it’s time to empty, the barrel is brought by an individual or a multi-barrel servce to the local Biogas Plant. There, waste is traded for energy in the form of cooking gas, warm water for showers, or electricity. All of these forms of energy are generated by processing the human waste at the Biogas Plant.

Once the contents are collected at a neighborhood facility, where the secretions could be farmed to create methane gas through composting, they can then be used as an energy source or fertilizer.

Working with the Indian non-profit: Sulabh, which is already operating various ways of serving the needs of slum dwellers in India, Lerner will create a pilot project to be launched in India’s capital. http://www.greenprophet.com/2011/04/israeli-designer-green-toilet-indias-slum-dwellers/
http://www.haaretz.com/print-edition/news/just-what-india-needs-a-green-toilet-1.356318