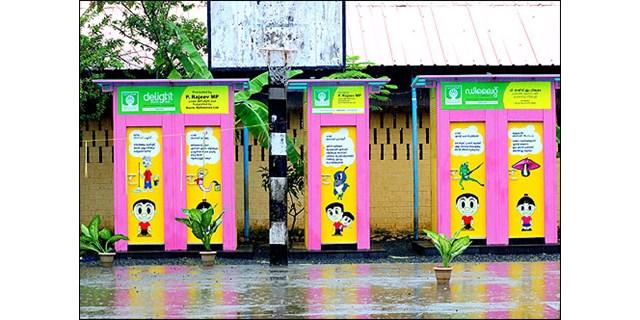 India’s first e-toilets called Delight were installed in December 2010 in Kerala. Having been designed to meet India’s dire sanitation needs and provide a cost-effective solution for low-income users, the toilet is compact, has an automatic payment collection system, a regulated water system for efficient water use, and a mechanism that shuts the toilet down if there is power failure. In addition, the toilets are installed with a GPRS system so that administrators can ensure proper functioning remotely. Finally, the e-toilets are also energy efficient through their use of solar panels to generate electricity and in some cases, their waste management systems. Having been successful in different parts of Kerala and Delhi, Saudia Arabian company Eram Scientific Solutions decided to invest in the project and take a 50% stake in the company.

The city of Thiruvavananthapuram receives around 10 lakh (1 million) tourists every year, and the state of Kerala earns Rs 15,000 crore (Rs 150 billion) a year from tourism. But for these 10 lakh people who land in the city, there are only 5 toilet complexes with 40 toilets available.  50 per cent of all schools in India do not have proper toilet facilities, and because of this reason alone, many girls discontinue their studies.

Now read this: a government girls’ school in Ernakulam has become the first school in the country to get an electronic public toilet as part of a Sustainable Comprehensive Hygiene project initiated by the local Member of Parliament.
The man responsible for the revolutionary electronic toilet is M S Vinod, and engineer and director of the Thiruvavananthapuram based Eram Scientific Solutions Pvt Ltd.

Though Vinod wanted to be an entrepreneur when he was still an engineering student, the software company he and his friend, Abhilash started – Rain Concert – flopped. He started another company and that too failed.  That was when he got a job as an IT officer with the Government of Kerala.  The work he had done for Akshaya, an ICT program in Malappuaram, one of the most backward districts of Kerala, changed his life and helped to bridge the digital divide among the people.  “Akshaya awakened the entrepreneur in me again. I wanted to do something that can have an impact on the society.  I decided that I will work in the socio- economic field and whatever work I do would be innovative,” said Vinod remembering his days at Akshaya.

Sanitation is the area to work in

Vinod had many ideas to work on as an entrepreneur, but he chose sanitation as he felt it was one of the most neglected areas in India.  Though the government has kept aside Rs 45,000 crore (Rs 450 billion) for sanitation, and there is a National Sanitation policy that allowed government organisations and the private sector to work in that area, nobody actually responded to the idea.  Though in a state like Goa there are many public toilets, they are not maintained properly.  “It was a big challenge to come up with a good sanitation idea,” says Vinod.  “I chanced upon the electronic toilets that are widely used in developed countries. I was certain that there would be a huge market for the same in India.  Government organisations, local bodies and even private sector through CSR (corporate social responsibility) funds can buy them.  There is no dearth in funding. It is an area where technology has not been used at all. So, we decided to focus on sanitation.”

Vinod started all alone first but was joined by Abhilash and a small group was soon formed, and they started working from his sister’s house. Rain Concert, his first company, was revived.

Electronic toilet is a concept that was first developed in Europe, where they have the pay-and-use toilets with multiple facilities.
What Vinod wanted to do was ‘Indianise’ the technology by making it cost-effective and redesign it to suit Indian environment.

The first e-toilet in India, named Delight, designed by Vinod was installed in December 2010 in Kozhikode where women working in a crowded commercial street were badly in need of a proper toilet. It was exclusively for ladies.  “It was the pilot model and we were showing it to various government agencies. But the Mayor of Kozhikode forced us to move and install it in Kozhikode though we were not fully ready with the sewage treatment or the cost or the full design.  Newspapers wrote that the e-toilets designed by us would revolutionise the area.”  Though they were not ready, from the very next day, they started getting orders from various quarters.  Vinod admits that the user feedback they got from women in Kozhikode was very useful in making proper changes in the design.

How does an e-toilet work?

Delight Electronic toilets are compact, portable systems that occupy only 45 square feet (less than 5 square metres) of space for each unit.  There is an automatic payment collection facility in the unit, and the coin validator accepts coins of any denomination.  The moment coins are inserted, the door of the unit unlocks and with it, the light and the exhaust fan get switched on automatically.  Once the user enters it, the closet gets wetted with a pre-flush of 100 ml of water.

Even if the user does not flush the toilet after use (like it happens in India most of the time), it automatically gets flushed and cleans the closet.  If the user flushes it himself, the back-up flush system does not kick in. If the usage is for only less than 3 minutes, the system flushes with 1.5 litres of water and if the user is there for more than 3 minutes, the system flushes 4 litres. So, the total water usage does not go beyond 4 litres.

Though the unit has a normal 230 V power mechanism, there is a power back up also. Inadequate availability of power and water will automatically close the unit, well in advance.

The water tank in the unit stores 500 litres of water from the supply source but there is also a motor to pump water from an additional source in the case of emergency.
Delight toilets use 40 units of electricity and 1,008 litres of water for 168 users.

There is a GPRS enabled system so that it can be controlled remotely which includes remote opening and closing of the unit, daily collection monitoring, and checking the functioning of the unit through a web application or through mobile phones.

Delight is a green e-toilet! They have provided solar panels to generate electricity for its own use.  In the areas where drainage facility is not available, the unit has “Green Eco friendly” solution to manage the disposal of the waste.  By tying up with ISEA, an Italian company, Delight e-toilets bacterially process solid waste.

In addition to the money collected through coins, the panels on all sides are designed to take advertisements. Vinod says that the unit installed in Delhi collects Rs 300,000-400,000 every day through ads while the e-toilet installed at the Museum Gardens in Trivandrum generates Rs 10,000 per month.  Enter Eram Scientific Solutions.  When they started getting more orders than they had imagined at Rain Concert, Vinod and his group realised that alone, they would not be able to deliver all the orders. Soon, they began approaching business houses for support.  That was how Siddeeq Ahmed, chairman and managing director of the Saudi Arabia based Eram Scientific Solutions chose to invest in Delight e-toilets. Eram is into petro-chemicals, engineering, manpower, sanitation, etc.

Ahmed eyed the project as a social enterprise, and took 50 per cent stake in the company. He said he had no desire to make profits from this venture. So far, he has invested Rs 6 crore (Rs 60 million) in the project.  “For us this is not a commercial enterprise. Whatever money we make from this project, we plough it back to further refine the product or make similar socially impactful products,” Vinod says.  The company that makes the Delight e-toilet was re-christened Eram Scientific Solutions.

First e-toilet in an Indian school

The Communist Party of India (Marxist) Member of Parliament from Ernakulam, P Rajeev approached Eram for Delight e-toilets as a part of suchi@school (Sustainable Comprehensive Hygiene Initiative) project.  This initiative of his, aims to provide toilets and urinals in all government and government-aided schools in the district of Ernakulam.
This was in July this year.

The MP shortlisted 37 schools in the district where e-toilets have to be installed. He created a corpus fund of Rs 2 crore (Rs 20 million) (Rs 50 lakhs from the MP Local Area Development Scheme and the rest from the CSR funds of the business houses in the area) to buy 100 Delight e-toilets that costs Rs 180,000 each.  While the money to buy e-toilets came from the MPs fund and CSR funds of corporates, the maintenance will be by the PTA (Parent Teacher Association).  Now that Rajeev’s idea has become famous, 7 MPs, 30 MLAs and 50 gram panchayats have approached Vinod for more e-toilets.

He is happy that if a Gram Panchayat purchases an e-toilet, the Government of Kerala will give 50 per cent subsidy to them, and the government has plans to extend tax exemption also to the project.

Research on the design

Eram works with London School of Economics, IISc, Imperial College and Notre Dame University to improve upon the design of Delight e-toilets.

Instead of standalone toilets, the vision of Vinod is to have connected toilets all over Kerala.  “By March 2012, we will have 1,500 connected Delight e-toilets throughout Kerala so that we can even publish a toilet map.  For example, if you are driving from Trivandrum to Kozhikode, you can have the list of toilets on the way as they are all GPRS controlled.”
Vinod expects the demand to go up to 2,000 units a month very soon.

So far, Eram has installed 150 Delight e-toilets in Kerala (more than 100 in Ernakulam), Delhi, Mumbai, Kanyakumari, etc.  While Delhi, TamilNadu, Karnataka, Andhra Pradesh, Mumbai, Gujarat, WestBengal, Assam, UP, Pondichery and Daman have shown interest, Eram has closed deals with UP, Delhi, Karnataka, Mumbai and Tamil Nadu.  After participating in an Indo-Afro commerce exhibition in Mumbai, Eram has received many orders from African countries like South Africa, Botswana, Nigeria, Seychelles, and Madagascar. By next February, 200 Delight e-toilets will go from India to Africa.  They are looking at the Middle East also as a prospective market.  Vinod is overwhelmed by “the kind of response we are getting from developing countries.”

While the design is by Vinod, the steel panels are manufactured in Bengaluru, fibre comes from Goa and the plastic modules from Mumbai while the assembly unit is in Coimbatore.

Other than quite a few national awards, Delight e-toilet has been featured in the Innovation Map on the web portal of the Italy-based Think Innovation Knowledge Foundation (Think), an international non-profit research institute. Delight is the fourth Indian solution to be mapped in the foundation.