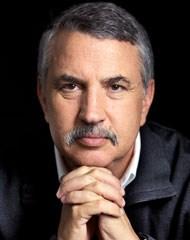 In a recent New York Times article, Thomas Friedman discusses how Indian companies that are directly addressing the needs of low-income populations, will be a key to its continued growth and in contributing to poverty alleviation. The country’s large labour force, the proliferation of technology, and its numerous engineering, technology, IT, and other schools, are all coming together to create low-cost, high-quality, and innovative solutions. Friedman cites a range of companies including one which provides farmers with technical assistance and crop-related information through cell phones and another that offers comprehensive eye screening to test for ailments, which if identified early, can be cured or alleviated.

THE world hit seven billion people last week, and I think I met half of them on the road from New Delhi to Agra here in India. They were on foot, on bicycle, on motor scooters. They were in pickups, dented cars and crammed into motorized rickshaws. They were dodging monkeys and camels and cows. Somehow, though, without benefit of police or stoplights, this flow of humanity that is modern India impossibly went about its business. But just when your mind tells you that this crush of people will surely overwhelm all efforts to lift the mass of India out of poverty, you start to notice a pattern: Every few miles there’s a cellphone tower and a fresh-looking building poking out of the controlled chaos. And the sign out front invariably says “school” — engineering school, biotechnology school, English-language school, business school, computer school or private elementary school. India is still the only country I know where you can find a billboard advertising “physics degrees.”

All these schools, plus 600 million cellphones, plus 1.2 billion people, half of whom are under 25, are India’s hope — because only by leveraging technology and brains can India deliver a truly better life for its masses. There are a million reasons why it won’t happen, but there is one big reason it might. The predicted really is happening: India’s young techies are moving from running the back rooms of Western companies, who outsourced work here, to inventing the front rooms of Indian companies, which are offering creative, low-cost solutions for India’s problems. The late C.K. Prahalad called it “Gandhian innovation,” and I encountered many examples around New Delhi.

Meet Vijay Pratap Singh Aditya, the C.E.O. of Ekgaon. His focus is Indian farmers, who make up half the population and constitute what he calls “an emerging market within an emerging market.” Ekgaon built a software program that runs on the cheapest cellphones and offers illiterate farmers a voice or text advisory program that tells them when is the best time to plant their crops, how to mix their fertilizers and pesticides, when to dispense them and how much water to add each day.

“India has to increase farm productivity,” explains Aditya, “but our farms are small, and advisers from the Agriculture Department can’t reach many of them. So they go for hearsay methods of planting, which leads to low productivity and soil desertification.” Using cloud computing, Ekgaon tailors its advice to each farmer’s specific soil, crop and weather conditions. Some 12,000 farmers are already subscribing ($5 for one year), and the plan is set to grow to 15 million in five years.

Meet K. Chandrasekhar, the C.E.O. of Forus Health, whose focus is “avoidable blindness” among India’s rural poor. A quarter of the world’s blind people, some 12 million, are in India, Chandrasekhar explains, and more than 80 percent of those are blind as a result of a lack of screening and a lack of ophthalmologists in rural areas. In the past, comprehensive screening required multiple expensive diagnostic devices to check for diabetic retinas, cataracts, glaucoma, cornea and refraction problems, all of which cause 90 percent of the avoidable blindness in India. So Forus invented “a single, portable, intelligent, noninvasive, eye prescreening device” that can identify all five of these major ailments and also provide an automated “Normal or Needs to See a Doctor” report; it can be run by a trained technician, who through telemedicine connects patients to a doctor.

“We work with a Dutch company on optics, and the University of Texas supports us in business development,” Chandrasekhar adds. “We are talking to a Brazilian company that is interested in manufacturing our technology and selling in Latin America.” Outsourcees are becoming outsourcers.

Meet Aloke Bajpai, who, like others on his young team, cut his teeth working for Western technology companies but returned to India on a bet that he could start something — he just didn’t know what. The result is iXiGO.com, a travel search service that can run on the cheapest cellphones and helps Indians book the lowest-cost fares, whether it is a farmer who wants to go by bus or train for a few rupees from Chennai to Bangalore or a millionaire who wants to go by plane to Paris. iXiGO now has one million unique users a month and is growing. Bajpai used free open-source software, Skype and cloud-based office tools like Google Apps and social media marketing on Facebook to build his software platform and grow his company. They “enabled us to grow so much faster with no money,” he said.

Finally, there’s Nandan Nilekani, the former C.E.O. of Infosys Technologies, India’s outsourcing giant, who is now leading a government effort to give every Indian citizen an ID number — a crucial initiative in a country where most people have no driver’s license, passport or even birth certificate.

In the last two years, 100 million people have signed up for an official ID. Once everyone has one, the government can deliver them services or subsidies — some $60 billion each year — directly through cellphones or bank accounts, without inept or corrupt bureaucrats siphoning some off.

“We’re bringing the most sophisticated technology to the most deprived,” said Nilekani. “The hyperconnected world is giving us a chance to change India faster, at a larger scale, than ever before.”