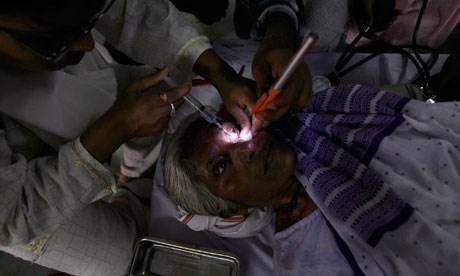 A Guardian article discusses the work of LV Prasad Eye Institute (LVPEI) in India. LVPEI is a network of more than 80 eyecare centres and a research institute, which treats at least one million patients annually. The organizatio remains sustainable through a combination of fees and donations, which help cross-subsidize the cost of treatment for low-income patients. With over 70% of hospitals in India privately-owned and existing government hospitals with lack of capacity and expertise, poor patients are often unable to obtain adequate treatment. Tiered pricing structures can therefore be critical for healthcare delivery for the poor.

An expanding network of eye clinics has found an innovative way of providing quality, affordable treatment to millions of blind and visually impaired poor people in India

Madan Keshav, a shy 11-year-old, looks tired as he waits for the optometrist to examine his eyes. He says he and his father travelled by bus for two hours to reach the LV Prasad Eye Institute’s (LVPEI) hospital in Mudhol, a tiny village in southern India. He perks up a little when he is asked to read aloud from the eye chart.

Madan has been diagnosed with a refractive error – a condition that usually produces either myopia or hyperopia because the eye fails to focus light and form a clear image on the retina. The most common remedy is prescription glasses. But eye clinics are rare in rural India, and almost nonexistent in remote villages like the one in which Madan lives. The Brien Holden Vision Institute, a Sydney-based organisation researching eye health, estimates that 11 million Indian children are either blind or visually impaired because they have never been screened or prescribed glasses.

That’s something LVPEI, a not-for-profit organisation that runs a chain of 82 eyecare centres and a research institute, hopes to change. It serves at least 1 million people every year through 14 hospitals and around 80 screening centres – a network that is still expanding. More than half of the patients receive free treatment.

Healthcare providers such as LVPEI, whose work is funded by personal donations and organisations in India, the US and Australia, as well as through patient fees, are helping to meet the demand for decent, affordable healthcare.

According to a report from PricewaterhouseCoopers in 2007, India is severely short of community health centres – it has less than half the number it needs to serve the population. Seventy per cent of hospitals in India are privately owned, which means millions of poor Indians, many of whom have no form of health insurance, have to find the money to pay for healthcare, which can leave them in debt.

In Mudhol, 65-year-old Raju Bhai is recuperating from that morning’s cataract surgery. She says her vision was “very clouded” and that when she had her eyes checked at LVPEI’s screening centre in her village, they sent her here for treatment. During surgery, her damaged lens was replaced with an artificial plastic one, and she hopes to have her sight back in a few weeks.

Dr Supriya Chinta, an ophthalmology fellow at LVPEI, is one of the two doctors working at the hospital. On average, she examines 100 people and performs 14 surgeries a day. LVPEI’s fellows, who are rotated regularly, staff its rural hospitals, treating infections, injuries and removing cataracts. For everything else, they refer patients to LVPEI’s tertiary care centres.

Cross-subsidies are fast becoming a way for private, often non-profit, hospitals to serve the poor without relying on charity. Narayana Hrudayalaya, a cardiac hospital in Bangalore, which performs the highest number of paediatric heart surgeries in the world, uses cross-subsidies to provide affordable, or free, heart surgery to poor patients. And to help finance its telemedicine centres, which serve rural areas. Ziqitza, an ambulance service with GPS tracking in Mumbai, serves nearly 60,000 patients, including many poor people who can now afford to call an ambulance because cross-subsidies keep the price low. LifeSpring, a chain of maternity hospitals in Hyderabad, charges 70% of its patients only half the fee because it, too, uses a tiered pricing system.

Some may argue that tiered pricing can be unfair. But Rao says it pays for treatment that poorer patients could never afford.

The Indian government appears keen on LVPEI’s model, including it in the ongoing five-year plan. And the Australian government has shown interest in doing the same in developing countries in the western Pacific. Although LVPEI uses grants and donors to fund its research – it is credited with performing nearly 800 stem-cell transplants for treating corneal blindness – or as capital expenditure, its operating costs are covered by the fees from patients, which account for more than three-quarters of its annual income.

Rao says its presence in local communities will help to tackle some of the underlying causes of eye diseases and raise awareness about seeking treatment. For example, universal vaccination against rubella can eliminate most cataracts among children. And the causes of 80% of cases of blindness in India – refractive error and cataracts – are easily treatable once they are diagnosed.