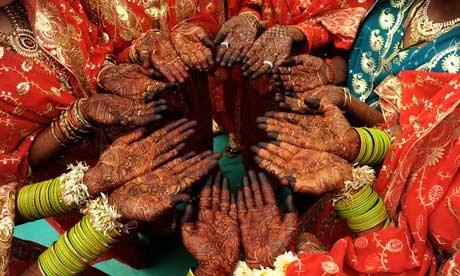 In its efforts to improve India’s poor waste and sanitation situation, the government, in collaboration with NGOs, is promoting a “No Toilet, No Bride” campaign to encourage the development of better infrastructure for waste disposal and treatment in villages and slums across the country. The campaign seeks to leverage the power of potential brides by having them accept marriage requests only upon the condition that grooms must have toilets in their homes.

If you don’t have a toilet at home, you might not get a bride in India. In a silent revolution of sorts, Indian women across the country, especially in rural and semi-urban areas, have a single condition before they agree to a match – the groom must have a toilet in his home.

The “No Toilet, No Bride” campaign, initiated by the government, is co-opting young women to bring in much-needed social change. Across the country, more people have access to mobile phones than to toilets.

Ranjana Kumari, director of Centre for Social Research, one of the NGOs involved in the campaign, says it has succeeded in certain areas. “Lack of basic hygiene at present is very much a marginalised farmer’s practice,” she says. “There are affluent communities with land and concrete houses who are now building toilets.”

For the campaign to sustain itself in the long run, villages need to be have the appropriate resources. “The campaign cannot work properly unless there is a proper drainage system or a soak pit is created,” says Kumari. “And it is difficult to create such networks in villages. You need to have technology to back it. When you want to do these things, the whole plan has to be transferred comprehensively to the villages.”

According to the Planning Commission, 49% of urban Indians have access to sanitary solid waste disposal systems. However, out of that, only 28% have a sewerage system, mostly without treatment facility. The commission’s report also says that while around 60% of the generated solid waste is collected and disposed of, only half of it is dealt with in a sanitary manner.

According to 2008 statistics from ministry of rural development, around 60% of houses in urban areas have toilet facilities compared with 57% of houses in rural areas (up from 1% in 1981). Despite the progress, India is still far from meeting its MDG goals of halving the number of people without access to sanitation by 2015. In India, 665 million people, the largest number worldwide, still defecate in the open.

Bindeshwar Pathak, who in 1970 founded the Sulabh Sanitation Movement, which aims to provide affordable toilets, says: “You have to understand the context in which we talk about sanitary practices in India, where there is often no space to build a toilet. People live in small houses and there is no land to build a toilet. Despite all these problems, the country has made a huge jump and that should be acknowledged. From 20% in 2001, 57% of the population have toilets today – and it’s a huge achievement.”

It’s not just the MDG goal that is at stake. The tourism industry has also suffered because of less-than-satisfactory sanitation facilities. A recent World Bank study puts the cost to India of not having adequate sanitation facilities at nearly $54bn annually. The study says premature deaths, treatment for the sick, and loss of productivity and revenue from tourism were the main factors behind the significant economic loss.

“For decades, we have been aware of the significant impacts of inadequate sanitation in India,” Christopher Juan Costain, the World Bank’s head for south Asia’s water and sanitation programme, said on publication of the report. “The report quantifies the economic losses to India, and shows that children and poor households bear the brunt of poor sanitation.”

The study says there are 450,000 deaths out of 575m cases of diarrhoea every year in India because people in both urban and rural areas often do not wash their hands, and also have to cope with poor drainage systems. The World Bank study estimated that the cost of treatment for diseases due to poor hygiene was around $38.5bn.

The economy also loses $260m in tourism revenues due to poor sanitation as tourists are reluctant to come to India due to lack of sanitation facilities. Gaur Kanjilal, executive director of the Indian Association of Tour Operators, agrees that lack of sanitation facilities is a turnoff for many visitors. “There is an imminent need to raise public awareness about basic hygiene and build toilet facilities,” he says. “Often people go back from India with a sense of shock. We need to change that.”

Globally, an estimated 1.1 billion people defecate in the open, and about 1.5 million children die every year because they lack access to safe hygiene, sanitation and water. The staggering figures are ample proof of the threat to global public health.

Meanwhile, in India, involving women in the process of sanitation and hygiene seems like an idea that can work. Traditionally, in Indian households, women are responsible for cleanliness. As Kumari says, “In India cleanliness is a woman’s responsibility, whether she likes it or not. Harnessing that power will work wonders, but only when it is supported through better technology and training.”