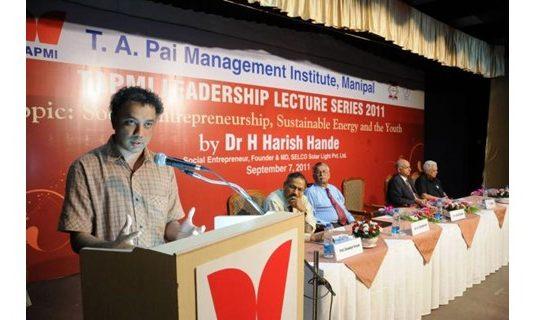 Harish Hande, Founder of Solar Electric Light Company (SELCO) emphasized the need for a decentralized approach to sustainable energy distribution to management and engineering students from Manipal University. During a lecture on “Social entrepreneurship, sustainable energy and the youth,” Hande explained that business models need to shift towards focusing on the needs of the poor and should not follow the examples of companies like Walmart and McDonalds.

He was delivering a lecture on “Social entrepreneurship, sustainable energy and the youth” organised here by T.A. Pai Management Institute (TAPMI) as part of its leadership lecture series. Students pursuing management and engineering courses in Manipal University attended the lecture.

He said that India was a paradox of an overdeveloped and an underdeveloped country. India needed a paradigm shift in the business models it followed.

Despite all the talk of nine per cent economic growth, there were glaring inequalities in the country, he said.

Dr. Hande said that being educated in an IIT, he was a product of subsidy.

He opposed the view of subsidies being perceived as bad in several MBA institutes. The youth should choose a job not just on monetary consideration, but also with the intention of contributing to society, he said.

Judging people on the basis of their job profile and social status was wrong. All individuals had an identity of their own, which should be respected.

The Indian education system was too theoretical than practical. It took him four years to unlearn what he had learnt as a student of IIT. The youth in the country were hesitant to work in rural areas. They preferred to work in urban areas, Dr. Hande said.