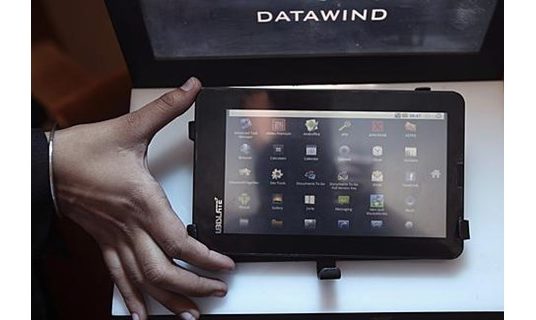 India launched ‘Aakash,’ the world’s least expensive tablet in October to enable thousands of low-income students access to computers. The tablet, which is made in England but put together in India, costs $45 and helps promote digital inclusion. The government initially handed out 500 computers for free though after that, it will be sold at a subsidized price of $35 to students. Creating low-cost products such as the tablet will be important in a country where internet usage is increasing but the digital gap remains wide.

India hopes that the launch of what is being called “the world’s cheapest tablet computer” will help tens of thousands of low-income students connect to the digital world.

The $45 device with a seven-inch color touchscreen, Wi-Fi connectivity, and two USB ports is meant to bridge the digital divide in a country where only three percent of the population has computers.

The world’s cheapest computer is called “Aakash,” the Hindi word for sky. It was the brainchild of the Indian government, which put out an offer for it to be developed. While made by a British-based company, the tablets are being assembled in India.

Under a pilot project, the government distributed 500 free computers to students this week. They will travel to villages to demonstrate the device, which will be sold to students for a subsidized price of $35.

“I see this as an exercise wherein the government actually puts all the textbooks, all the course material in an e-book format which is accessible across devises. This would also ensure that there does not have to be a library in every village, every town of the country. You can get whatever books you want, everywhere,” said Agarwal.

Indian officials have called the development of the world’s cheapest computer “the beginning of a journey.” They have called for competition to drive prices down even further.

Technology experts however caution that the government must monitor the performance of the device closely.

Agarwal says the tablet is a “very good start” in making affordable computers. But he says it must be user-friendly, otherwise customers may turn away from it. “You can’t expect an iPad kind of hardware out there or usability. For $35 it is pretty decent hardware, but in terms of usability what we found was the screen was not very touch sensitive,” he noted. “You have to poke it really hard to make it work, the processor was slightly slow. But what else would you expect for a tablet at that price?

Experts also warn that the limited Internet connectivity in the country will hamper the objective of spreading digital learning.

India is a technology leader and Indian I.T. experts are renowned for their skills. But despite a 15-fold rise in the number of Internet users over the last decade, access to the Web is limited to a fraction of the Indian population, and is the lowest among emerging markets.