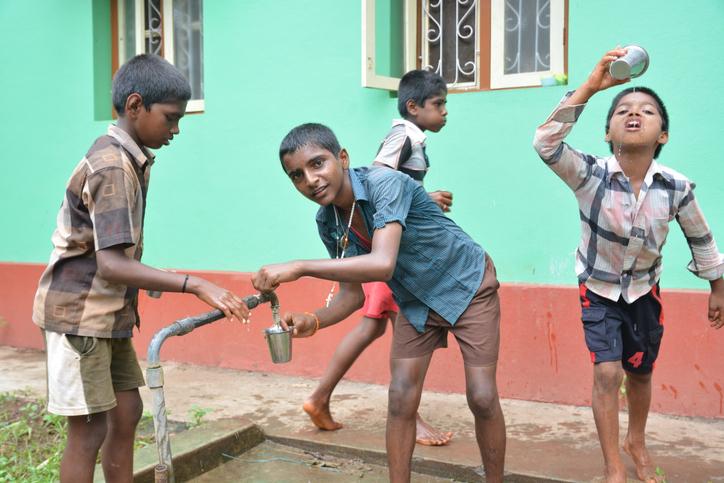 A Wall Street Journal article discusses the status of access to water and sanitation facilities in India and why massive public spending has failed to create any significant improvements in these areas. Despite budgeting $38 billion between 2007 and 2012, 59 million Indians live near contaminated water sources. The article explains however, that where the government has failed in properly constructing and managing facilities due to a lack of understanding of local conditions, social enterprises have stepped in. Water Health International and Sarvajal are two examples of entities creating strong links to local communities and integrating them into their business models so that communities have a vested interest in the ownership and maintenance of drinking water and sanitation facilities. Though difficult to currently see the extent to which these enterprises can scale their services, they still provide important lessons for the government in creating sustainable water solutions such as investing in R&D, training local communities in water management, and using new technology to monitor water quality.

The Indian government has dramatically increased spending on improving access to water and sanitation facilities.

Yet, according to the Department of Drinking Water and Sanitation, 59 million people live in habitations whose water sources are contaminated with fluoride, iron, salt or arsenic. The larger problem is bacterial contamination of water sources due to poor sanitation facilities and open defecation. Reliable statistics are unavailable but anecdotal evidence suggests that bacterial contamination is endemic across the country. An estimated 237,500 children under the age of 5 continue to die every year from diarrhea, contracted primarily through drinking bacteria-infested water.

Why has massive public spending failed to reach anywhere close to the stated goal of providing clean drinking water to every Indian?

Some 85% of rural drinking water supply programs depend on a local ground-water source, yet decisions on construction and management of water supply systems are made by government officials who do not have an adequate understanding of local conditions.

Partly as a result, government programs excel in building infrastructure but do poorly on operation and maintenance. According to the Planning Commission, 419,034 habitations have “slipped back” in the period from 2005 to 2010, with infrastructure that was built falling into disuse.

The government recognizes the problem. In the new framework for drinking water programs, it emphasizes involving local panchayats (elected village councils) in planning, construction and management of their own water supply systems. But, in practice, it has struggled to make such local involvement operational.

In this context, the work of two social enterprises – Water Health International and Sarvajal – are providing insights into how to sustainably deliver clean drinking water to rural areas. Both have reached impressive scale in serving rural populations using similar strategies of building small-scale filtration plants that service whole villages with bottled water at a cost of less than 20 paisa per liter.

WHI charges 4 rupees for its “Dr. Water”-branded 20-liter jerry can and also appoints delivery agents who offer optional home delivery for an additional charge of 6 rupees to 10 rupees depending on distance. WHI has already scaled up to 500 plants – the bulk of them in Andhra Pradesh – servicing approximately 1 million people. It is seeking to double its coverage over the next year.

Sarvajal, which follows a franchisee model, currently supports 127 franchisees in Rajasthan and Gujarat serving 70,000 people. Sarvajal’s water is priced at 6 rupees for a 20-liter can with an additional 4 rupees for doorstep delivery. They are now seeking to expand into an additional 1,000 villages in Madhya Pradesh and Uttar Pradesh over the next two years.

Both WHI and Sarvajal forge strong links with local communities as an integral part of their business model. WHI raises funds from third-party donors to build the plant and then operates it for a 10- to 15-year period. But ownership of the plant vests with the local panchayat, which provides land and access to a water source. Sarvajal identifies and trains local entrepreneurs in villages to run filtration plants. Both companies carry out social marketing campaigns to raise awareness of the benefits of clean drinking water before they expand to a new location.

Both companies have also invested in R&D to develop smaller-scale filtration units and real-time monitoring of water quality. WHI uses off-the-shelf technologies and components, but has created proprietary plant designs from them. Sarvajal has a patent-pending innovation that enables it to centrally monitor the functioning of all its franchisee water plants.

Despite their pay-per-use models and emphasis on commercial viability, social enterprises like WHI and Sarvajal depend on a mix of donor and commercial financing. WHI – an Indian subsidiary of a U.S. company of the same name – initiated operations in 2006 through an investment of $600,000 from the Acumen Fund, a social investment fund, and a $900,000 loan from ICICI Bank. Sarvajal, though registered as a for-profit entity, was set up by the non-profit arm of the Piramal Group of companies.

It is too early to tell whether such social enterprises can scale up further to serve much larger numbers of the poor in India. However, their business models offer clear lessons that the government can adopt to improve its own drinking water programs: invest in R&D, train local panchayats in planning for and managing local water supply systems, and use new technology to enable real-time monitoring of water quality.

The work of social enterprises like WHI and Sarvajal demonstrates that ensuring clean drinking water to every Indian over the next five-year period may well be a feasible goal.

[This is the second in a series of India Journals looking at the intersection of business and the poor in India; the next will look at caste discrimination in the private sector.]