India Could Show The Way In Organic Farming In 30 Years 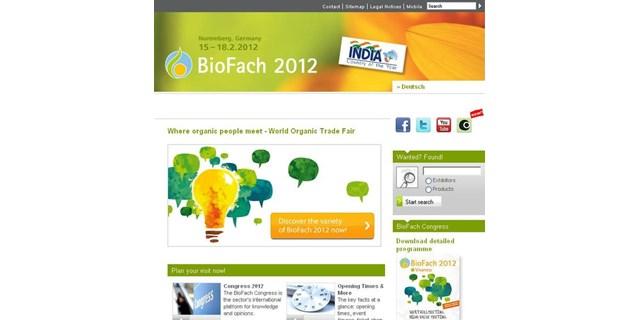 A recent BioFach 2012 conference in Germany highlighted the high potential of organic farming in India to generate significant revenue and contribute to farmers’ livelihoods. With Indian organic exports valued at $400 million, the government has increasingly started promoting the sector. In establishing the National Project for Organic Farming, the Government seeks to launch a domestic organic certification program. With increasing global attention paid to food security and poverty reduction, India has an opportunity to become a leader in sustainable agriculture and food safety.

The world’s largest annual organic products event, BioFach 2012, began here with a sharp focus on India and its products.

This is because they do farming in rain-fed areas and cannot afford modern agriculture that encompasses using fertilisers and pesticides,” said Mr Asit Tripathy, Joint Secretary in the Union Ministry of Commerce.

Changes were happening in Indian agriculture with mechanisation, corporatisation and contract farming, but in the last 10 years, the Indian Government has woken up to the potential of organic farming, he said.

Indian organic products exports currently are valued at $400 million and the target was to top $1 billion by 2015, he said.

“The $400 million makes up just 16 per cent of organic products produced in India,” Mr Tripathy said, adding that the domestic organic market was growing.

“Domestic organic products are competing against mainstream products in supermarkets in India,” he said.

With the setting up of National Project for Organic Farming, the Government was trying to launch organic certification programme for the domestic market. Default forums have been asked to set up a group of 500 farmers and encourage them to take up certification of their products, he said.

India is the ‘Country of the Year’ at BioFach 2012 and there is a strong presence of 51 manufacturers, including in textiles, at the fair.

Besides Agricultural and Processed Food Products Development Authority, the Tea Board and Spices Board are also participating.

Earlier in his address, Dr Ulrich Maly, Mayor of Nuremberg, said that a meeting of network of organic cities in Germany would be held during BioFach.

Dr Gerd Mueller, German Secretary for Food, Agriculture and Consumer Protection, said that Germany was attempting to expand organic cultivation to another 10,000 farms to meet the increasing demand.

He said that India could show the way in organic products in 30 years, especially in sustainable agriculture and food safety.

Mr Andrew Leu, President of UN’s IFOAM, said the current focus was on food security and poverty reduction. “If this has to be achieved, logically the focus should be small growers who make 70 per cent of farming in the world,” he said.

(The trip for the event has been sponsored by Nuremberg Messe with the collaboration of Apeda.)