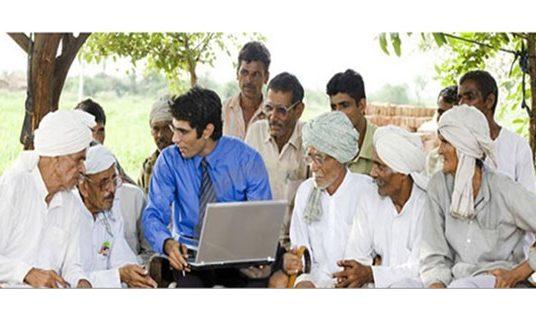 A number of Indian start-ups are developing technologies for last-mile connectivity for un-banked customers. Rural India customers frequently find it difficult to access basic financial services in a cost-effective and timely manner for a variety of reasons including long distances to collection points, and long lines or inadequate identification once there. An increasing number of companies are therefore are providing services such as low-cost money transfers, which can be accessed at low-cost ATMs or through community agents across rural India. Often, these start-ups help connect public banks and government schemes with villagers and those living in remote areas. Seed Financial Services and Financial Information Networks and Operation (FINO) are two such companies.

Till a few months back, Eswar Singh, a farmer in Haryana had to forego a day’s wage to stand in a long queue as he collected money from the government pension scheme. While Chatro, a housewife in a nearby village, would travel long distances to collect payments under various state welfare schemes.

“Sometimes during manual disbursements, names would be missing or due to other problems, they would ask us to come again the next day,” she says. Worse due to lack of proper identification, sometimes the actual beneficiary would not even get the money. However, Singh, Chatro and a host of other people in these villages are seeing a positive change.

A slew of start-up companies are now using technology to build last-mile connectivity to rural and unbanked customers. From just a network for underserved communities, it is slowly growing into an ecosystem of entrepreneurs targeting the financial inclusion segment.

Delhi-based Seed Financial Services, which acts as a banking correspondent for a number of commercial banks, provides electronic money transfer directly to the bank accounts of beneficiaries of government schemes. It is one of a host of start-ups that are playing a major role in the implementation of various Central and state schemes like the Mahatma Gandhi National Rural Employment Guarantee Act (MGNREGA) and Rashtriya Swasthya Bima Yojana (RSBY).

Apart from linking underserved customers to banks, these companies are building a range of products and services ranging from low-cost ATMs to mobile money transfer schemes through a network of agents in rural India. “This kind of a drastic change was possible with the RBI’s guidelines in 2006 that allowed banks to appoint business correspondents to deliver credit and receive deposit on their behalf,” says a government official who requested anonymity. Set up in 2006, Seed, a banking correspondent, offers services including enrolment of customers, opening of no-frills account, distribution of smart cards and finally disbursement of payment to the beneficiary.

FIELD FORCE
Seed Financial Services is executing various projects in over 200 districts across 20 states. “Having already opened 1.5 million no-frills accounts at the remote areas, now we are planning to complete five crore accounts by March next year,” says Anirban Roy, MD. Seed has a team of 4,000 employees and it has partnered with 19 banks, including State Bank of India , Punjab National Bank , State Bank of Bikaner & Jaipur, Central Bank of India , Bank of Baroda and Indian Bank , to offer various services under government schemes to people.

Elsewhere, Financial Information Networks and Operation (FINO), which was also set up in 2006 and incubated by the ICICI Bank , provides various state governments with electronic payment channels that are used to disburse payments under a host of social development schemes.

TECHNOLOGY INPUT
The FINO Smart card functions as a pan-India card, which can be used for domestic payments across more than 50,000 villages across the country. “FINO is also working with over 10 million customers for national health insurance scheme with ICICI Lombard,” says Manish Khera, CEO. The company now distributes NREGA/SSP benefits in six states for over 12 million customers. In the last fiscal, FINO had revenues of about Rs 200 crore, of which 40% came from government projects.

Chennai-based Vortex, an early entrant in the space, offers biometric-enabled ATMs as a last-mile-reach method to disburse money for government schemes. Founded in 2001, the company started work on these ATMs nearly five years ago and has since clocked up revenues of Rs 13 crore. Now, the company is betting big on government schemes as it will help it bring in more revenues through its partnership with banks.

“We have successfully completed a pilot in Tamil Nadu under rural employment scheme with other projects being implemented in more states,” says L Kannan, founder and CTO of Vortex, which has ATMs installed in about 400 villages through State Bank of India. Mumbaibased Atom Technologies also offers technology in the financial inclusion segment.

“We offer mobile-led ecosystem that is flexible enough to be implemented with or without smart cards,” says Dewang Neralla, CEO of Atom Technologies. It is a combination of standard mobile handset along with a Bluetooth enabled integrated device, he adds. Atom also channelises services to the banks’ customers by leveraging its rural retail footprint through its nonprofit organisation – Grameen Pragati – that provides business correspondent services.

MARKET SIZE
“Financial inclusion is part of the national agenda of the government for growth and development,” says Roy of Seed. He adds that the payment from the government under MGNREGA, Social Security Pension, National Security Pension , Rashtriya Swasthya Bima Yojna and the UID schemes for driving the social inclusion of population at bottom of pyramid level are driving the agenda of growth.

The Central Budget allocation for welfare schemes such as MGNREGA is about Rs 40,000 crore. Only about 40% of the country’s population has bank accounts, throwing open many more opportunities for banking correspondents and technology providers. This drives these early pioneers to scale up operations. FINO has already raised funding from HSBC Private Equity, IFC and Intel Capital.

Seed is looking at raising its first round of funding of Rs 50 crore this year. Vortex has also raised Rs 30 crore from Aavishkaar Venture , VenturEast and the Oasis Fund. FINO’s Khera says profitability depends on the scale and operational parameters of each of these projects. “Some projects would be viable and profitable at certain geographies at the same time would have high servicing cost in some other locations. However,the range varies from 2-5 % net on each project,” he adds. Despite the assured business, none of these companies completely depend on government projects for their revenues.

While companies such as Vortex and Atom are largely technology providers, Seed takes up projects from private sector banks and corporates as well. FINO also has a technology services arm. Next step for these firms is entering unchartered territories like India’s North-East.

Gurgaon-based Indepay Networks has tied up with Tripura State Co-Operative Bank (TSCB) to launch rural banking services in Tripura. Indepay will use a biometric enabled, UID compliant micro ATM infrastructure to process and deliver rural payments, including those for government schemes such as MGNREGA. The program was piloted at a few branches of TSCB last year, and is now being expanded throughout Tripura.