From No Doctors To E-Doctors In Rural India 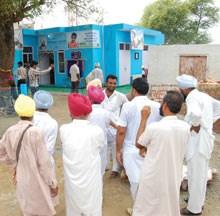 Healthpoint Services, a for-profit start-up company in India has leveraged the country’s expanding mobile and internet infrastructure to establish a network of e-health points. The company’s eight health points include clinics set up in different villages, in which villagers can consult a doctor who they interact with through a large TV screen and the internet. Given the country’s inadequate healthcare services, particularly in rural and remote regions, the clinics allow patients to consult a doctor and have diagnostics tests done. Healthpoint Services’ founder Al Hammond explains that the company is able to cover its costs by charging approximately 80 cents for an appointment with a doctor and $1 for diagnostics tests. The company was initially funded by U.S. based angel investors and hopes to expand into South America and Africa.

There aren’t too many doctors in the village of Hari Ke Kalan, in the Punjab region of northern India. But for $1, residents who bicycle to a new health clinic can get an appointment with a physician appearing on a large-screen television and beamed in over broadband Internet.

The clinic, built by a startup called Healthpoint Services, is one of a network of eight “e-health points” that the for-profit company has built in India as part of a growing effort by entrepreneurs to capitalize on the rapid expansion of cellular and broadband access in the poorest parts of the world. With successes such as text-message-based mobile payments taking off in some countries, many experts see medicine as the next major application of technology in poor nations.

In India, the rural population often has little access to medical services. When villagers get sick, they must either make a costly trip to visit clinics in big cities, take their chances with poorly trained local practitioners, or go to free government clinics that are staffed by physicians only a few hours a week.

Healthpoint’s clinic in Hari Ke Kalan is a money-making enterprise, says  Al Hammond, Healthpoint’s cofounder. It charges about 80 cents for a consultation with a doctor and about a dollar for diagnostic tests, such as blood tests to measure blood sugar or check for infections. “For a family with an income of $3 to $4 per day, that’s affordable, and we can cover our costs with those prices,” he says.

Hammond, who calls himself a “serial social entrepreneur,” says he decided after studying low-income consumers that a for-profit company had a better chance than a nonprofit of delivering medical care to millions who need it. “It only makes sense to do this if we can scale enough to change the health-care system,” he says. “I wouldn’t, as a startup, try to change the U.S. health-care system. But in rural India, there is no health-care system, so it’s much easier to innovate there.”

The company was initially funded by U.S. angel investors who were attracted to the social impact of the venture, including the cofounders of Athenahealth, a producer of electronic medical records technology based in Watertown, Massachusetts. Hammond says Healthpoint has quickly become self-supporting and that the clinics are “cash-flow positive.”

Each Healthpoint clinic typically starts as a water service, where local families can fill jugs with clean water for a monthly subscription fee of $1.50. Hammond calls the service a form of preventive medicine, and not only because many infectious diseases are spread through tainted water. Villagers who come for water often end up getting seen by a doctor. In addition to eight e-health point clinics, the company has 16 water points in India, with plans to expand to South America and Africa.

Clinics are staffed by health workers who measure vital signs, such as blood pressure and heart rate, and transmit the information to a doctor in a nearby city. Local workers also run diagnostic tests, such as cholesterol or pregnancy tests; the results are relayed to the physician and recorded in the patient’s electronic health record. Eventually, Hammond hopes to enlist government or other aid to fund care for those who can’t afford the cost of an appointment.

Telemedicine is well suited to address two major challenges confronting health-care delivery in India: a growing population and a shortage of physicians. “Many [doctors] have gone abroad, and those who are here don’t want to go to remote villages,” says Sunita Maheshwari, a physician and cofounder of Teleradiology Solutions, an outsourcing company whose on-call doctors analyze radiology images for hospitals in India and other countries. “Telemedicine would address such a gap.”

Some previous efforts to expand telemedicine in India have stumbled, including a 2005 plan by the national government to budget funds for 50 facilities. “Practically speaking, they never took off,” says Maheshwari. She says that effort foundered because of unreliable satellite connections, lack of inexpensive broadband access, and too little practical know-how on the ground. Now, as broadband costs have dropped and reliable wireless communication has penetrated more and more of the country, chances are better that telemedicine will succeed.

Indian patients have been amazingly quick to accept telemedicine, says Maheshwari. Radiologists with her company provide consultations over the Internet for free clinics in northern India built by Cisco Systems. “We see about 20 patients a day,” she says. “Now everyone wants a doctor in Bangalore.”