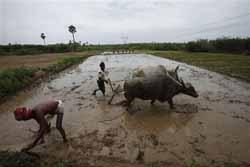 Mansukh Jagani, from Gujarat was named one of India’s seven most powerful rural Indians by Boston-based Forbes magazine. Jagani first developed the multi-use vehicle in 1994 and has since further refined it to be able to level, plough, weed, and sow farmland for approximately $0.20 per acre. It is both a fuel efficient and low-cost machine (up to 40% less than a conventional tractor), which helps farmers reduce their reliance on cattle, relatively expensive to maintain, to care for their land. Mansukhbhai Jagani, Mansukhbhai Patel, Mansukhbhai Prajapati and Madanlal Kumawat are among Forbes’ list of seven most powerful rural Indian entrepreneurs, whose “inventions are changing lives” of the people across the country.

IIM-Ahmedabad professor and founder of India’s Honeybee Network Anil Gupta has selected the seven most powerful rural Indian entrepreneurs for a compilation in Forbes magazine.

“India’s villages have become a hot bed of innovation, as its rural poor develop inventions out of necessity. Several of the people on this list have no more than an elementary school education,” Gupta says.

Jagani developed a motorcycle-based tractor for India’s poor farmers, which is both cost effective – costing roughly $318 – and fuel efficient (it can plow an acre of land in 30 minutes with two liters of fuel).

A farmer, Patel invented a cotton stripping machine that has significantly cut the cost of cotton farming and revolutionised India’s cotton industry.

Prajapati, a potter, invented a clay non-stick pan that costs Rs. 100 and a clay refrigerator that runs without electricity for those who cannot afford a fridge or their electricity and maintenance costs, Gupta said.

Next on the list is Future Group Chairman Kishore Biyani. Called the “Sam Walton of India,” Biyani’s company operates about three million square feet of retail space in 25 Indian cities.

Coming in next is social entrepreneur Anshu Gupta who founded GOONJ, a system that transfers used clothing and household goods from India’s rich to its poorest communities.

Gupta collects 30 tonnes of cloth every month and distributes it across 20 states. “He has an amazing reach, a simple network and excellent supply chain management,” Gupta said, adding Troikka Pharmaceuticals MD Ketan Patel is “India’s pain-killer.”

Also on Gupta’s list is Dadaji Ramaji Khobragade, who invented the HMT rice, a highly successful rice variety which yielded 80 per cent more rice than the conventional variety. HMT is now grown all over India, on some 1,00,000 acres in five states.

Madanlal Kumawat, a grassroots innovator with no more than a fourth-grade education, developed a fuel-efficient, multi-crop thresher that yields cleaner grains, which can be bagged directly and eliminates the cost of cleaning.

Gupta said his last pick Chintakindi Mallesham, inventor of the Laxmi Asu Machine, “ignited a revolution in India’s weaving community.” Mallesham’s machine can make six saris worth of material in one day, and “no human effort is required beyond placing thread on the machine and removing the material after the process is complete.”