Footprints To A Greener Future 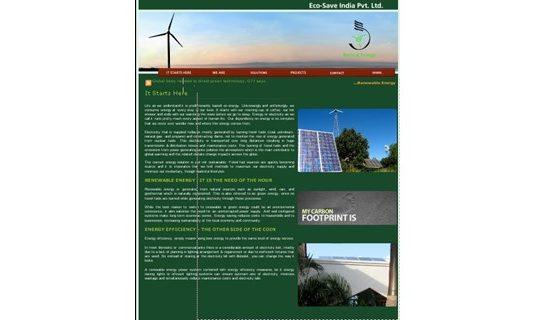 Less than two years old, Eco-Save India, is a renewable energy service provider that fits residential, industrial, commercial, and public buildings with solar panels, micro wind turbines, and solar hot water heaters. The systems draw on sun and wind energy to light homes and power gadgets and appliances. Though installation of the system can be expensive, households realize cost-recovery through longer-term savings on their power bills. Not sure how to reduce your carbon footprint? Four Bangalore start-ups that are using technology to create products that are good news for the planet, tell DNA how.

Eco-Save India
Want to reduce your dependence on the erratic electricity provided by Bescom and cut down on those whopping power bills? Eco-Save India fits up your home with solar panels and micro wind turbines that create renewable energy generated from sunlight and wind that can power most of your gadgets and light up your home – in a completely green way.

“What setting up a renewable energy system in your home does is drastically reduce your dependence on grid power,” says Adarsh Vansey, a former Greenpeace member who founded Eco-Save India with two friends, Vinod Kongattil and Suresh Inamdar. All three are driven by their passion for environment-friendly practices and a desire to drive demand for renewable energy.

In its 20-month existence, Eco-Save India has already kitted out eight Bangalore homes with renewable energy systems. Though most people make this ‘rooftop energy system’ the primary source of electricity to power their homes, it is usually coupled with grid power, informs Vansey.

As people get more accustomed to creating their own energy, dependence on grid power falls, he says. “Eventually, most people end up treating institutional power as a backup. Setting up these systems is costly, though it’s a one-time cost with almost zero maintenance or running expenses, and using them merely as a back-up doesn’t make sense,” he adds.

The cost of setting up the system can range from anywhere upwards of Rs2.5 lakh — but there is a gradual recovery of costs as power bills become smaller.

Apart from creating energy-producing sources, the company also advises apartments and businesses on making their premises more energy-efficient, such as by using LED lights.

Studio ABD
The BPL Studylite, designed by NID designer Abhijit Bansod and his design start-up Studio ABD, has won a clutch of awards, including the prestigious Red Dot Product Design Awards 2010, but that’s not the only reason you should buy it for your work table or your child’s study.

This sleekly designed, high-illumination study lamp is fitted out completely with LED lights, which cuts down electricity consumption by 60-70%. An LED, or Light Emitting Diode, is now rapidly replacing the conventional incandescent light bulb or even CFL bulbs as an energy-efficient light source, says Bansod.

The StudyLite does not produce any ultra-violet or infra-red radiation or even heat radiation and was co-created with a team of specialists from Sankara Nethralaya, Chennai to ensure that the lamp does not cause eye-strain on prolonged use.

“After school, most children study for long hours. Studying in improper light, especially during power cuts, can cause eye strain. Surprisingly, we found most study lamps available have no scientific basis to provide correct light for studying,” says Bansod.

The lamp also comes with rechargeable batteries, which enables it to run for up to six hours in case of power outage. There is a green alternative to this too: the lamp comes with a solar panel that can be charged during daylight hours. StudyLite, retailed by BPL, costs between Rs1300 and Rs1690.

Using technology to produce green products is part of Studio ABD’s DNA, so much so that the design firm is creating eco-friendly labels for its products using laser technology to ‘print’ areca nut leaves, minimising the use of paper and printing ink. “The problem with green products is scaling up and matching industrialised processes in terms of quantity and time of delivery. But technology can help us do that,” says Bansod.
www.studioabd.in

Thunk in India
Imagine a bag made of a milk tetra-pack or a pen-stand made of a juice carton. Imagine taking plastic bags thrown away as litter, putting them together and treating them organically to create a new material that can be used to make anything from carpets to bags.

That’s what 25-year-old Srishti School of Art graduate Suren Vikhash imagines, which led to his developing his own start-up Thunk In India. Suren calls this ‘Upcyling’ instead of recycling.
Suren started this venture using the Rs50,000 won by his final college project at an IIT-sponsored competition and with a Rs2 lakh loan from his parents.

Suren worked with waste management and recycling venture Daily Dump during his final semester, and that’s when the idea of creating lifestyle products out of plastic and other kinds of waste occurred to him.

Working closely with ragpickers, who work at the most basic level to segregate waste into bio-degradable and non-biodegradable categories, Suren also saw a way to empower them, which started with training them to sort efficiently.

The designer in him kicked in when he saw how waste polythene could be woven with reject cotton yarn to create material from which bags, pouches, stationery holders, table mats and even furniture could be fashioned.

“Plastics and tetra-packs are materials that have a long life, even up to 200 years or so. But their usable life-span is really short, say two-three weeks,” says Suren. The only way to reduce their environmental impact, he figured, was to reuse them in creative ways.

Today, Thunk In India’s products retail out of upmarket stores such as Ants, Mother Earth and Bombay Store in Bangalore and travel across India to stores in Delhi, Mumbai and Kolkata. “Why use new resources from the earth when you can use material that’s already there,” asks Suren.
http://www.thunkinindia.com/

The bicycle has been made from bamboo, replacing 3.5 kg of steel tubes traditionally used to make a bicycle. Launched officially in December 2009 during the BSA Tour of Nilgiris, the ‘Bambike’ came into being when Sharma’s ‘recumbent trikes’ – a kind of tricycle which you ride in a recumbent position — was noticed by a friend of his whose work involved creating products from bamboo.

“Since bamboo is not a mainstream material for making bikes, people feel the Bambike may break easily. But I have got it tested by TI Cycles, Chennai, and the bike has passed the JIS test,” says Sharma.

The Bambike is custom-made and can be made to any size using any prescribed parts.

The model that Sharma currently makes, a road bike, weighs around 12.5kg (the weight may vary a bit depending upon the size of the bamboo sticks, which are treated so that they don’t attract borers.

The joints are made using resin hemp and sisal fiber and finally it is coated with a polyurethane coat to protect it from moisture. The entire frame of the bike is made using bamboo and no metal is used, though the rest of the parts are made of standard steel or alloy material.