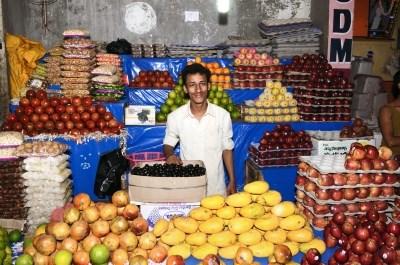 An article on the state of unorganized agriculture in India makes a case for building out a more robust food retail supply chain. The article sites that with high levels of damage to produce, middle men who take advantage of farmers, and a lack of an appropriate organized network, produce often reaches the consumer at a mark up of around 2000%. This presents an opportunity for businesses to build cold chains and direct better technology to farms, enabling both the farmer to receive a higher profit and consumers to receive better quality produce at a lower cost. Normal 0 false false false EN-GB X-NONE X-NONE MicrosoftInternetExplorer4

Organized retail of packed food and raw food reduces prices of food for urban citizens and pays farmers a better price for the agricultural produce. It eliminates middle men and decision making at every other level. This is not rocket science. However, politicians refuse to do away with the WWII public distribution system in order to retain power at the district level.
Well, for one thing, the format of the village haat where you sell and buy agricultural produce is nearly 2,000 years old. In certain countries, on site technology and e-governance have made things quite different from the way the old English bought and sold berries in the village market or how hops are traded in Scotland; or even how barley is purchased in Germany and Australia for brewing wine and beer.

In India , a farmer grows fruit in his orchards. He has to guard it himself from pests and thieves. Crop failure owing to natural causes will not give him any insurance from any organized sector. He has to employ farm labour to dislodge the fruit from the trees and then package it appropriately so that the fruit can reach the local haat.

Transportation is the farmer’s responsibility too. Hiring a 20-year-old Mahindra and Mahindra or TELCO (now Tata Motors) bone shaker has to be either on profit sharing or promise to pay when the money from the haat is realized.

The sale at the haat realizes just enough money for the farmer to buy two sets of clothes for this whole family till the next crop in the next half year. His basic requirements of food supplements or medicine or spare parts and diesel for his tractor, (if he owns one) come from the same kitty.

Now begins the game of cat (seller) and mouse (consumer). The agri produce changes hands and vehicles many times and ultimately lands up on the consumer’s plate with a price increase of nearly 2000 per cent. Unbelievable but true: Lobsters are hand picked on the Orissa-Bengal sea coast and sold for Rs 5 a kilo to the money lender. The same lobsters reach the consumer in New Delhi for Rs 1,600 a kilo.

The agricultural supply chain presents opportunities for a number of industries, which are so far still-born in India. The first is the cold chain industry. Consider mangoes, in the seventies and eighties mangoes arrived by the crate to the cities in India. They were 80 per cent ready to eat and 20 per cent spoilt enough to be made juice out of. If the whole crate were not sold in the oncoming week, it would spoil and make the trader lose money.

After a series of losses and growth in number of consumers of mangoes in the cities, the farmers and the unorganized transporters hit upon a plan. Pick the mangoes from the trees in an unripe condition but ripen them with carbide gas. This leaves the mangoes yellow in colour but hard to touch. The taste would be like kraft paper and the consumer is left with no choice but to make a mango shake out of this and throw it down the gullet.

What about cold chain? The logistics industry’s version of refrigerated trucks? Well, it never took off in India. Once in the late 1980’s and the early 1990’s the central government introduced a concept of Rs 50 lakh of subsidy for every active cold chain project. Nearly 300 projects were filed and begun; all of them worth Rs 1 crore or more. All of them showed losses later and siphoned off Rs 50 lakh subsidy for their other businesses

When will our businessmen, politicians and bureaucrats realize that cold chain, combine harvesters, fumigated warehouses, reefers, refrigerated storage units and hot houses are the next big opportunity both for business and for graft? If corrupt members of the ruling party or the opposition want to make illicit gains, then agricultural activity is the one industry to watch out for.

All this will develop with one fell swoop if food retail foreign direct investment is allowed into the country. This will reduce prices of food and also keep farmers happy with greater incomes. If farmers get into the organized retail supply chain they will also be entitled to farm insurance and health insurance , two things they badly need right now.

Kalmadi and his gang reportedly made off with Rs 76,000 crore. That would be chicken feed if they wanted to rob the agri-produce industry. The size of this industry when it reaches full capacity would be close to Rs 50 lakh crore.

However, many things would have to be put in place, before that potential is reached. One, farmers and their financials would have to be linked to credit risks. A safe and prudent farmer should be rated high on the safety scale and get loans at lower rates of interest while a reckless farmer should be taxed with higher rates of interest for loans taken. Reward the efficiency of the farmer. That is the first step.

Food retail is the umbrella industry, which takes care of the entire supply chain. A good example of food supply chain is that of ice cream.

If we can replicate the supply chain for ice cream for vegetables, meat, fish, dairy and processed food, then we have got it made. Ice cream began as a cottage industry. Even today large corporations are barred from making ice creams so they bring out something with a very funny name: frozen desserts.

That is precisely why except Amul and Mother Diary, two state owned organizations nobody has been able to build international ice cream brands such as Blue Bunny or Haagen Dazh.

The babus want to restrain Indian ice cream to the level of rural railway station home made salty kulfi and food retail to the slap dash mom and pop stores selling by the hand held locally crafted scale. As a nation we are mortally afraid of well organized urban organizations and systems . We want to remain cocooned in the rural setup.

That is why till now, we vote khadi clad politicians to power. To be poor and clueless and be a country bumpkin is in. So what food retail is serving farmers and urbanites in a big way around the world. We are like that only!