Designing The Future Of Housing For India’s Poorest 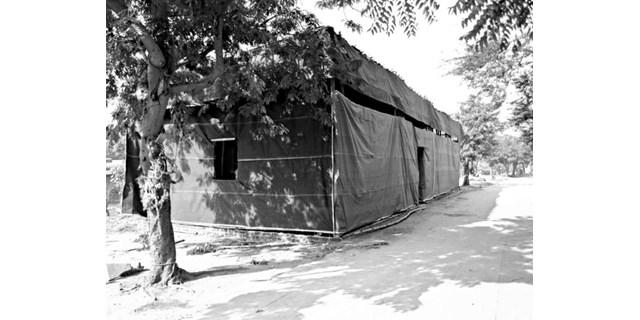 Delhi-based Micro Home Solutions, a “design services company for low-income urban dwellers” has recently developed two new projects for low-income and/or homeless Indians. The first project is the creation of a sanitary shelter for those who do not have access to private, clean, and safe sanitation services. The second project involves helping slum dwellers construct better designed homes that will last as slum areas grow.

The words “affordable housing” don’t properly explain the work of Micro Home Solutions. The company, based in Delhi, India, does occupy that housing space, but its more of an interdisciplinary design services company for low-income urban dwellers, drawing upon the insights of sociologists, urban planners, architects, policy-makers, and engineers to help create a sustainable living ecosystem for some of the world’s poorest residents. And they’re beginning to catch the world’s attention, as they have been semi-finalists and finalists in a number of competitions as of late, including Echoing Green and Ashoka Changemakers.

Founders Rakhi Mehra and Marco Ferrario are a husband and wife team who originally met while working with Grameen Bank in Bangladesh and then their journeys took them to some interesting places before winding up back in South Asia. Mehra, a graduate of Oxford in economics, went onto pursue her MBA at Harvard, and Ferrario, originally from Italy, worked on commercial architecture projects throughout Europe and the United States. But as Mehra is a Delhi-native and her husband is practically “half-Indian,” as she tells Fast Company, the opportunities to blend their expertise and passions in India were too enticing to pass up.

“India is urbanizing and finally responding, but there’s a missing opportunity. We knew that an interdisciplinary solution was needed,” says Mehra. “We saw very little institutional, interdisciplinary interaction. And meanwhile we found that the demand for housing in Delhi is diverse and fragmented.”

They consider themselves “facilitators-cum-incubators,” says Mehra.

The for-profit social enterprise’s two latest projects involve creating a sanitary shelter for the poorest of India’s homeless–those living on less than $2 per day. The other project is an inter-disciplinary collaboration to help slums better construct and plan out how residents build their homes–rather than the organic, messy, un-planned building that usually takes shape, Mehra and Ferrario are bringing not only aesthetics to the planning process, but also some long-term foresight about how such slums will look in 20-50 years, as they eventually become full-blown towns.

“We wanted to create something with more dignity, with ventilation, and increase the standard of living. Our fundamental principle is design (in the broad sense of the word), community, and finance. And throughout, the goal is to scale up,” says Ferrario.

Challenges are plenty for the pair, but perhaps not in the way one might think. Whereas Ferrario had been designing modern, minimalist villas and commercial spaces, the scale of construction he’s now working on is a small fraction of that size–small rooms on two floors.

“I have to say that when you have to design a house that is 22 square meters, it’s more difficult than designing a villa or a huge shop,” says Ferrario.

The challenge is also about how to convince clients that getting professional advice is actually needed, much as it is valued in developed parts of the world.

“What’s been irritating has been convincing the client to adopt our suggestions,” says Ferrario. According to Mehra, clients in India are not used to consulting architects before building. They just build what they want. “There’s no Hindi word for architecture,” adds Mehra. “And what you and I think might be ugly they think is a sign of status,” adds Mehra, quick to point out cultural differences in aesthetics between India and the West.

The ultimate goal for Micro Home Solutions is to provide sound housing planning for low-income dwellers and at the same time keep the company financially sustainable so that it can continue to provide its services. Mehra was extensively involved with social entrepreneurship courses and clubs while studying at Harvard and she’s determined to prove the for-profit social enterprise model. To that end they do require a small fee for their technical advisory guidance and a team from the Yale School of Management is also helping them think through how to stay financially sustainable and profitable while serving their constituents.

And while Micro Home Solutions is intent on involving interdisciplinary actors, it has been tough to make the case for its model, especially with the government.

“Big developers like Tata are proposing affordable housing, but the architectural side is not really taken into account,” Ferrario says. “When I talk about design, I mean the full meaning of the word. We have a chance to take a different approach. It shouldn’t be just one engineer–we should start with sociologists and economists. If we study the history of cities, we can learn and take approaches that create something that works better.”

On good days, the company’s work has the utilitarian holding hands with the transcendent.

“We do work with the government to understand infrastructure, density, and transportation. The 62 towns of millions of people–what are they going to look like in the future? We’re really trying to make this an interdisciplinary initiative,” says Mehra. “People say why don’t you just build it for them? But we’re striving to create a long-term social change movement. Not just a product.”