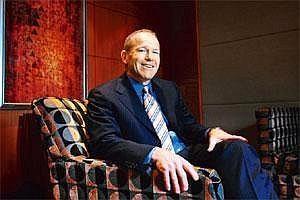 David Calhoun, CEO of information and measurement company, Nielsen Holdings discusses how international clients can “learn from the innovations of Indian marketers for bottom-of-the-pyramid consumers.” Calhoun explains that the company’s focus is on emerging markets, particularly in India and China, where innovation has enabled a greater number of companies to tap into the base-of-the-pyramid markets. Calhoun goes on to say how multinationals could benefit from understanding how to apply this innovation to their products and services globally.

Overseas clients could learn from the innovations of Indian marketers for bottom-of-the-pyramid consumers, says David Calhoun

The former vice-chairman of General Electric Co. (GE), who surprised many when he moved to Nielsen in 2006, was in India to attend a consumer summit organized by the research firm. Nielsen, owned by a group of private equity firms, including Blackstone Group LP?, Carlyle Group?, Kohlberg Kravis Roberts and Co., and Thomas H. Lee Partners LP, was listed on the New York Stock Exchange this year.

Calhoun said in an interview that Nielsen is focusing on emerging markets, with India and China getting the lion’s share of the investments. Edited excerpts:

You have completed five years at Nielsen. What have been the big changes during your tenure?

I just started my sixth year at Nielsen. I wanted to simplify the way we talk about our company. Five years ago, we had lots of different companies within Nielsen, different product names and brands that we tried to promote. If you ever went home and described to your children what you did, it would be very difficult. The notion was to describe it as a company that’s built on information collected in a systemic way. We said we will do it around two fundamental consumer acts: the act of buying and the act of watching (television).

The big resource shift that was significant was in favour of emerging markets. I probably said on my first day that we will focus on emerging markets. That had a lot to do with my history (at GE) and my appreciation for the opportunity. But until you removed the natural barriers—the shifting of mindsets and thinking within Nielsen—it was hard to do. We lowered the barriers two years ago.

Is it about the downturn in developed markets or about the potential here?

It’s all about the potential here. In the old company, the only people who knew what India could be were the people in India. Our multinational clients who grew up in the Western world just did not know how big the opportunity is.

Do you visit consumers in emerging markets?

I have been doing this my whole life. It’s what I enjoy more than anything else: hundreds and millions of people are going to increase their standards of living in a profound way for the next two decades, the scale of which has never been seen in human history and, most likely, will never be seen again. I get to see it now from the ground up.

How much are you investing in this market?

I try to avoid this. It’s in tens and millions of dollars…and the two markets that get the lion’s share are India and China.

The company went public last year. What was the money used for?

To clear debts. When I came, we had debts. We are a healthy company now.

How has growth of media changed the consumption pattern of consumers across the world?

I would call it the extension of media from a traditional television-based viewership to now a social-based audience in the online community, what we all call digital. The thing that excites me the most about social media…is its power as “demand formation”.

You talk about things that matter most to you, share identities, make new friends, create needs and emotions, and that forms demand. You may talk about a product. Nobody has advertized anything to you, but you just have those conversations. It creates marketing opportunities for advertisers, for product designer who think how to reach that conversation.

Are you looking at acquisitions in digital?

I am looking at everything I can invest in.

Any opportunities in India?

I have not seen an opportunity yet that entices me.

Market research firm Ipsos claims it is the largest player in custom research and you are bigger in retail audit. Is that true?

I don’t know the answer to that, but it wouldn’t bother me if it was true. Custom research for me and our company is important because clients need it. The word custom means that it is uniquely suited for their needs, and in the research world, that is important. I don’t want to kid anybody about my business interests. Custom research as a business is not the greatest business in the world. I try and use custom research to create new syndicated forms of information.

The business I like is the one where every next project helps to inform the subsequent project. It is the collective data set that creates value. That’s another way of describing syndicated research. That’s the model that Nielsen prefers. For our company, custom research is the smallest of our product lines. But in the emerging world, because fewer syndicated information data set exist, it has a higher profile. The lion’s share of our revenue comes from retail market share and audience measurement.

Talking of audience measurement, your television ratings joint venture with WPP in India has quality issues, according to some broadcasters.

The challenge in India is fragmentation. It is probably the most fragmented market in the world and, therefore, the sampling basis that we use just has a higher margin error. That’s measurement science. But the broadcaster whose market share is growing never complains ever. Those whose audience share might be contracting do. That’s the nature of that business. It always revolves around winners and losers. We will always endeavour to create bigger samples and to reduce variability based on the science itself. But we like the joint venture and we like the measurement.

Would you invest more?

We will invest more if the market is willing to pay for more.

What are your takeaways from the consumer summit?

A couple of big takeaways. The phenomenon in the retail world around kirana (mom-and-pop store) and the local, personal touch that exists in the traditional trade in India is unique in the world. It is unique relative to China, unique relative to all other major developing markets that I have been around. Modern trade development here will be tougher. It does not mean it won’t be successful. Home delivery is something that modern trade in other countries did not have to deal with. That was probably my biggest “aha” moment. Separately, value orientation clearly dominates everybody’s attention. Inflation threats are real. Consumers want more for less. How manufactures and marketers use innovation on the “value” objective instead of the “premiumization” objective is going to be the big differentiator in terms of who wins and who loses.

But in a slowdown, the same holds true for the global consumer.

Absolutely. I think the innovation that gets applied here in India to attract the bottom of the pyramid might end up being the most exportable innovation in the world. I would entice my major multinational clients to invest in innovation here with the thought that they can take that innovation to the value-conscious consumer everywhere else in the world. In the rest of the world, they are value-conscious because their incomes are declining. Here inflation is on the rise. The beauty of India is that there is more optimism here than there is in the developed world. You can appeal to that optimism.

Do you plan to stay on in Nielsen? There have been reports that your contract is ending on 31 December.

Contracts are sort of silly things. I have never had one before. I have always been an employee. The real notion is, do you enjoy your job, are you having fun, do you see things that you never saw before? Every day in the world of consumption, especially in the emerging markets, I get to do all that. I will stay and I see a long future.