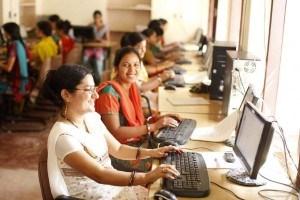 A few years ago, Mumbai-based Piramal Foundation established Source for Change, the first all-women BPO in India. In doing so, the organization began operations in a rural area in Rajasthan, training women on how to use computers and complete back-office tasks. The initiative has contributed to women’s empowerment in an area where women are typically confined in their homes doing household tasks. In its efforts to sustain rural employment for women and slow migration to urban areas, Source for Change is promoting the establishment of a larger network of BPOs. The organization has a documented training curriculum and process map for standardizing operations across BPOs and hopes to see 50 100-seat centers across northern and western India by 2013. Rural India constitutes 69% of India’s population out of which 86% of rural population earns less than a hundred rupees per day. Bagar, a rural town located in the Shekhawati region of Rajasthan, India, is recognized as an educational center with 35 different schools and colleges and the world-famous engineering college, BITS Pilani nearby. Ironically, Bagar has very limited job opportunities, especially for college-educated women. Many married women practice purdah covering their faces with veils and are not allowed to venture outdoors.

It was 2007, and Meera Saini felt her career was going nowhere. The 24-year-old primary school teacher in Bagar, Rajasthan felt the zing was missing in her life. Until the day she heard an announcement in an auto rickshaw in the side lanes of Bagar inviting candidates to join a BPO centre. Saini jumped in and became one of the early recruits of Source For Change (SFC).

With its promise of bringing jobs to remote villages and helping companies reduce costs, Source For Change (SFC), an all-women BPO was founded, an initiative of the Mumbai-based Piramal Foundation. Ronak Shah-Batham finds out more about this initiative…

During the initial recruiting efforts, SFC founders were repeatedly asked the same question by the men of the village who were apprehensive about society norms for women employment –“Do you really think that women can learn computers?”

SFC has unequivocally proved that the answer is “yes”.

SFC is lead by a core team of highly qualified people having US based experience at Citigroup, IBM, JPMorgan and U.S. Air Force, while the professional management team has a solid background in the offshore BPO business in India and in development bodies like the UN’s UNROC.

Women with their computers

Hiring women for the BPO satisfies both social and business intelligence. Clients attain high quality products at competitive process and women gain technology skills and employment due to their high adeptness and long term commitment to the company.
“The already-low attrition rates can be brought down even further by employing women. They are less likely to move away to urban areas,” says Shrot Katewa, co-founder & COO of SFC.
Beginning its operations with just 10 women with minimum 10th grade education and most of them being first-time paid employees, SFC has managed to succeed with its total employees expanding to 45 full timers and 20 part-timers.
SFC’s purpose and mission is to bring rural India into the mainstream ‘knowledge economy’ and equip rural women in India with relevant skills to be part of this knowledge-economy. They aim at operating country-wide ‘Network of all-women rural BPOs’ and engender employment for at least 1,50,000 college educated women in rural areas in the next five years, by provisioning IT-enabled services in their hometowns.

“SFC’s all-women staff, drawn from high school pass-outs in the nearby areas, is setting a precedent by mastering computer related skills and delivering high quality back-office services for global clients. These women have a vision to transform themselves and their community by building a world-class BPO in rural Rajasthan,” adds an enthusiastic Biplab Saha who is the CEO of SFC. ”Our motivation is to sustain employment for rural women, reduce the urban-rural divide and migration from rural to urban and increase disposable income among lower-income groups.”
When asked about the services offered by SFC, Biplab responds, “We employ college educated women in rural towns to provide back-office services like research data-entry, image data entry, academic, legal and business transcriptions, translations and call-center help-desk. Most of our clients are organizations that are engaged in academic, social, economic & political research; market research companies; and larger BPOs outsourcing lower-end data-processing work to us”.

Sonam Jangid, a 19-year-old undergraduate from Islampur village in Rajasthan says, “I am the first woman from my village to have a job. My parents were against women from our family working in offices but I managed to convince them otherwise and told them that it was essential in this era of computers.”

Though rural BPOs are fast gaining acceptance, urban India’s mistrust of rural India is a reality. Many urbanites still do not trust a high quality product to be delivered from a rural area.

“Despite the mainstream media attention to SFC and other rural BPOs, and the potential of a 40-50% savings by outsourcing to rural BPOs, we have found it difficult to get contracts from the corporate sector due to perception issues,” add Biplab about his ongoing challenges with their initiative. “Most of our business still comes in the form of short-duration projects from the social sector, and research-based & educational institutions. The short-term nature of projects increases our risk in expansion, and is hindering our ability to set up more such rural BPO centers across other locations.”
Few of the other hurdles involve power and broadband connectivity. Also getting the right people and recruitment is a much bigger deal than their urban counter-parts.
To sustain their initiative SFC is applying the methodologies like Six-Sigma and Lean that are practiced in the mature BPOs, to standardize their operations across networks of rural BPOs.

The organization has also documented the training curriculum and mapped processes for starting a rural BPO. This documentation will act as a blueprint for entrepreneurs to start off BPOs in rural areas.  SFC ‘s aspiration is to have 100 seat data-entry centers, in or around 50 district towns in northern & western India by 2013. These centers, staffed by local college-educated women, will be comparable to urban BPOs, and clients can expect consistency of quality & service delivery. “We will set up Rural Assistance Call Centers and Rural Customer Service Network across all district towns in India. Here we will act as a platform for businesses to provide services to the rural areas,” envisions Biplab.

SFC’s ingenuity is an incipient in expanding job horizons for rural women. As the corporate world realizes the competitive potential running their back office operations out of rural regions, the change is bound to accelerate its pace.

Sunita is simply one among the many educated village youth to join the many BPOs that are being set up in villages of India. “Before SFC, teaching was the only career available for women in the area,” says Sunita Choudhary, another staffer. Sunita had completed her studies to go on and become a teacher but decided to join SFC in 2007 instead to “learn computers”.

Examples like these show how such BPOs can transform the face of rural India if they can empower even a small proportion of educated youth in villages.
For information and enquiries about the services offered contact SFC at staff@sourceforchange.in or visit http://www.sourceforchange.in/