Can India’s Women Cast Off The Burden Of Water Carrying? 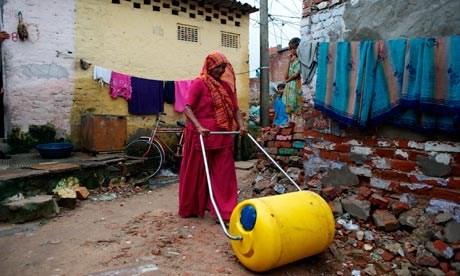 University of Michigan MBA graduate, Cynthia Koenig has developed the $20-$30 Wello WaterWheel, a 90 litre plastic barrel that can transport up to 2.2 gallons of water by being rolled instead of carried. A less expensive version of Q Drum and other water wheels that were developed in South Africa in the 1990s, the Wello WaterWheel was trialed in Rajasthan and has also been tested in Mexico and Haiti. Koenig plans to begin distribution early next year; however, it will likely take some adjustments so that costs come down even further in order to be purchased by low-income communities.

It is an age-old image of rural India: a woman trudging a long distance with a huge pot of water precariously balanced on her head. And despite an ambitious nationwide effort to provide piped water to every rural household, it remains a common sight in most Indian villages.

An American “social entrepreneur” is now hoping to change that, by replacing the head-borne water pot, which carries 10 litres (2.2 gallons), with a 90-litre plastic drum that can be rolled home.

The concept is not new – the Q Drum and the Hippo Water Roller, for instance, were invented in South Africa in the early 90s. But their popularity has been limited because of their price, $70-$100 (£43-£61) each, too high for the developing world.

After trials in arid Rajasthan, Cynthia Koenig, who has an MBA from the University of Michigan, has set up Wello WaterWheel to make plastic water barrels for as little as $20-$30. The prototype has been created by a US design firm, Catapult.

“We’ll set up a pilot manufacturing unit and roll out the barrels by early next year,” said Koenig, 33. “During trials in Rajasthan villages, we found that people were really excited by it. The magic will be in making the right product at the right price and distributing it as widely as possible.”

The idea of rolling liquid is almost as old as the practice of fetching water in head-pots – think of whisky and wine barrels, or water transported on ships.

In India, however, the traditional commercial water supplier, called a bhishti (from the Persian word for paradise) and immortalised by Rudyard Kipling in the poem Gunga Din, carried water in a goatskin.

As with Din quenching the thirst of injured British soldiers, the tradition began on the battlefield.

The bhishtis are still around, some even working for municipal water departments – a symbol, like the woman with the pot, of modern India’s failure to provide piped water to tens of millions of people in cities as well as villages.

“It’s such a pathetic sight in this day and age to see people lugging water over long distances,” said Gita Kavarana of the Centre for Science and Environment in Delhi. “In villages, especially for poor tribals and Dalits, the situation is terrible.

“Whether WaterWheel succeeds will depend on many factors – price, durability, terrain, and so on. But at $20 to $30, it will be out of reach for the poor.”

Koenig sees her venture as both self-sustainable and profitable, and hopes to peg the price further by selling advertising space on the plastic barrels.

After tests in India, Mexico and Haiti, she is confident that the WaterWheel can be an all-terrain alternative to water pots, taking a huge, historic and debilitating load off impoverished Indian women.