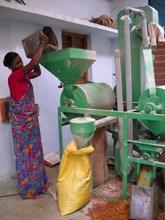 Growing demand for organic food in India coupled with greater awareness and education has made a gradually increasing number of farmers prepare their land for organic farming. The article indicates that the benefits of organic farming are seen by organic food retailers who have greater turnover as well as by fully-converted farmers who have realized lower costs and higher profits. HYDERABAD, India, Sep 9, 2010 (IPS) – He had decided to grow watermelons this summer on his one-acre (.405 hectare) plot, and so Veera Narayana went about preparing the arid red earth by first ploughing it and then lighting fires in the furrows.

He explains that ploughing the earth thoroughly exposes pests’ larvae to the heat of the sun, while ash in the furrows will act as pesticide.

But Narayana says that at some point he would also be mixing neem seeds, green chili, garlic paste, and kerosene as yet another anti-pest concoction. There would be pastes made out of cow dung and jaggery (the better to trap insects) as well, and then neem powder fermented in cow urine.

“Certainly easier to pop open a can of chemical pesticide, mix water in proportion, spray, and be done,” admits Narayana. But since the 42-year-old farmer went organic, he has cheerfully gotten rid of shortcuts like using store-bought pesticides and now spends hours mixing anti-pest brews with ingredients that can be found at home or even in the fields.

That means Narayana’s land and produce will no longer have the kind of toxins they were subjected to when he was still using chemicals to grow crops. Narayana himself will also escape being exposed to toxins that are commonly found in manufactured pesticides.

Indeed, with more Indian consumers turning to organic food as part of their quest for a healthier lifestyle, many of the country’s farmers are shifting to methods that are kinder not only to the environment but also to their own bodies.

For sure, it may seem as a no-brainer for farmers like Narayana to go organic. For one, organic pesticides do not kill earthworms and other plant- friendly insects. For another, they keep the soil surface soft and absorbent, as well as free from toxins that could eventually end up in water systems – and the produce itself.

Chemical pesticides have also been blamed for respiratory and skin ailments suffered by some farmers.

Then again, it is not easy to break old habits, even if they are harmful ones. For Indian farmers, too, it has been a matter of waiting for an organic food market to develop before they would even consider switching to methods that in fact had been used by their forefathers.

Just five years ago, she and her sister-in-law would give away their organic food products that went unsold. Today she says she still operates her business from her home garage, but sales have boomed. “In the whole of 2009, Adi Naturals’s turnover was 650 (U.S.) dollars,” says Kumar. “But in these last six months alone, it is nudging 8,700 dollars – a 13- fold increase.”

Yet while it is said to have grown as much as 200 percent in recent years, India’s organic food market is still considered in its infant stages. Farmers would thus not be stampeding anytime soon toward organic farming.

Of course there are those like Narayana who see the huge potential of the organic food sector in this country and want to have a headstart. And while Narayana is going at it alone, some farmers have chosen to sign up with cooperatives, such as the Dharani Farming and Marketing Mutually Aided Cooperative Society Ltd.

Dharani – one of Kumar’s suppliers – is among India’s largest farmer collectives. Promoted by Timbaktu Collective, a major non-government organisation here in the southern state of Andhra Pradesh, it produces organic millets, pulses, and oilseeds.

Dharani has 3,000 acres (1,214 hectares) of cropland used for organic farming in Anantapur, the second most drought-affected area in India.

The 860 small and marginal farmers who own and run the cooperative, however, are determined to re-establish traditional, environmentally sustainable, and economically viable farming practices in their rainshadow region where water stress, years of monocropping, and overuse of chemical farm additives have left fields sterile and farmers destitute.

According to Dharani president B. C. Bommali, the cooperative’s sales are rising dramatically. Just last year, sales were at 28,000 dollars, he says. This year still has several months left, but Dharani has already rung up business worth 72,000 dollars, he adds.

Some 300 farmers are currently lined up to register with Dharani – and willing to pay 1,000 rupees (about 21 dollars) as their portion of the share capital.

Being part of a cooperative means farmers cut expenses associated with organic farming.

Organic produce, for instance, has shorter shelf life than chemically treated commercial foodstuff. That translates to a potentially high wastage, which could be reduced with a ready marketing network like what Dharani provides.

Dharani, however, follows the less expensive certified peer-inspection system. In the first three years, a farmer’s produce is treated as “organic-in- conversion.” From the fourth year, it is certified as organic. Narayana does say organic farming is more labour intensive than the chemical-using version. But so far even his wallet shows proof that it is all worth the effort.

His field had yielded a truckload of watermelons, which he has since harvested and sold. Being organic, they fetched a premium price – about 1,000 dollars, says Narayana. His capital: just 130 dollars, including labour costs. http://ipsnews.net/news.asp?idnews=52768