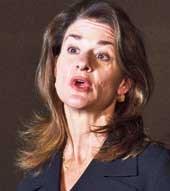 The Gates foundation has committed $23 million to an international non-government health agency that will reach out to the state’s private sector to improve diagnosis and treatment of childhood pneumonia, diarrhoea, tuberculosis and kala azar.

The project seeks to improve the prescription practices of doctors through a network of private sector health care providers in 25 of Bihar’s 38 districts, officials said.

It will be part of a broader engagement between the Bihar government and the Gates to improve the health of the state’s population that was initiated last year but appears set to expand now with several new projects.

Among other goals, the initiative will seek to reduce maternal and infant mortality figures and improve nutrition among children up to five years of age through relevant messages delivered to women and communities through health care workers.

“We’re looking at interventions that can help change (health) outcomes for babies and women,” said Melinda Gates, co-chair of the Gates foundation, visiting India this week. The programme will begin in eight districts and expand over time.

The private providers network project will analyse prescription practices, the quality of drugs in the market, and the appropriateness of drug regimens prescribed.

Bihar wants to increase its tuberculosis detection rate from the current 48 per cent to 80 per cent by 2015, and to eliminate kala azar by 2012. Public health officials believe timely diagnosis and correct prescriptions are crucial to achieve these goals. “We need people with special technical skills who can work with our health staff in the field,” said Amarjeet Sinha, Bihar’s principal health secretary. “We’re also looking for technical skills to track how changes in health outcomes can be brought about.”

The Bihar government and the Gates foundation had in May 2010 announced a partnership to help the state reduce mortality rates for mothers, newborn, infants, and children under five by as much as 40 per cent by 2015.

“Bihar wants to transform health really fast,” said one official who requested anonymity. The state today launched a programme that guarantees health to all boys below 14 and all girls below 18 years of age. Boys and girls within these age groups across the state will receive diagnostic services at government expense and, if necessary, even surgical corrections of certain congenital defects,” Sinha said. http://www.telegraphindia.com/1110323/jsp/nation/story_13753024.jsp