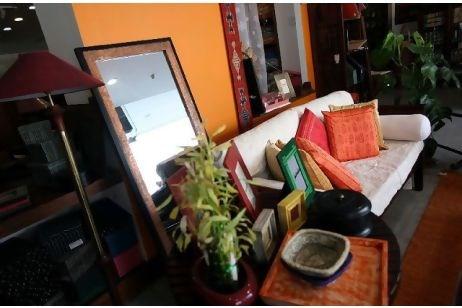 When John Bissell started a small home-furnishings company in his New Delhi apartment in 1960, two years after moving to India from New York, he had no idea that the one-man export operation he called Fabindia would become one of the country’s largest retailers and most beloved brands – with 142 stores, in nearly every Indian city and several around the world, including Dubai, selling everything from furniture to clothing to organic food.

On a recent Sunday afternoon in India’s capital, Fabindia’s home linen store in the GK1 market was abuzz with activity. Shop assistants folded brightly coloured bedcovers with such names as chaman, tarini and tanushree, as customers pulled them off the shelves.

The market, which is home to the company’s first store, now has three Fabindia shops, each dedicated to a different facet of the business. In the furniture store, a vast four-storey walk-up filled with modernist teak furniture, a middle-aged man and his wife looked through a dazzling array of handwoven dhurries ranging from traditional Afghan rugs to bright fuchsia and light green cotton dhurries. The marriage of traditional craft with contemporary design neatly sums up the essence of Fabindia.

A third shop nearby is devoted entirely to clothing and accessories, from beautiful leather bags and stylish laptop cases to traditional kurtas and a variety of more contemporary garments, geared towards a younger market, such as spaghetti-strap block-printed blouses.

On any day of the week, the stores are filled with a wide range of customers: tourists and non-resident Indians who make a habit of stopping by Fabindia before heading for the airport; young Indian couples setting up their first houses or apartments and older Delhiites who have clearly been patrons for decades. It is perhaps India’s favourite brand and the story behind the extraordinary transformation from small export house to multimillion-dollar retail giant is an interesting one.

John Bissell, who had worked as a buyer for Macy’s after graduating from Yale University, came to India in 1958 on a grant from the Ford Foundation to work with the All India Handloom and Handicraft Board, a government agency founded in the 1950s and charged with preserving local crafts and expanding the market for artisanal goods. Bissell’s assignment was to head a small team of designers, both Indians and foreigners, who had been brought in to help artisans develop more attractive products for export.

But Bissell quickly came to believe there was a large and untapped market for traditional hand-loomed and handprinted textiles outside India. “Somewhere along there he really fell in love with textiles,” William Bissell said of his father during an interview in Fabindia’s corporate office, a big airy warehouse on a dusty block of Delhi’s Okhla industrial zone.

“My grandfather had been here during the Second World War,” William said, “heading the land-lease administration in India. He got to see a lot of the country and he wrote back to my father about what an amazing place it was, a land of colour and adventure and also opportunity – I think that definitely influenced my father.”

By 1965, when John Bissell met Terence Conran, the legendary designer who would become Fabindia’s biggest client for the next 25 years, he had already developed lifelong connections with communities of weavers and a line of striking hand loom textiles.

In the decade that followed, Fabindia grew into a profitable business, selling dhurries, woollen rugs, bedspreads and table linens to an increasingly diverse list of clients stretching from Australia to Hong Kong to Mauritius. Fabindia’s strength, says Prableen Sabhaney, a spokeswoman for the company, has always been in its “ability to give traditional techniques a very contemporary look”.

From the company’s earliest days, Bissell worked closely with the artisans who produced Fabindia’s designs. When buyers from Conran’s Habitat store came to India, Bissell would travel with them to the homes of weavers to go over new designs or colour schemes for the dhurries to be sold back in London.

For a generation of young people in New Delhi, Fabindia’s blend of handmade cottons and contemporary designs defined both a look and a way of life. In 1976, the company opened its first retail store in a south Delhi market. The Indian designer Riten Mazumdar, who had trained at the renowned Finish company Marimekko, helped define that aesthetic with his bold geometric designs.

“Being Indian was something that people were still exploring at that point in time,” Sabhaney said. “Did you want to copy the western look or did you want to do something different?

“It allowed you to express yourself in terms of the way you dressed and who you were and what you did. It was a very important part [of life] for people growing up at that time.”

Fabindia’s kurtas, made with khadi, or hand-spun cotton, became a kind of uniform for young Delhiites, as Radhika Singh writes in her history of the company: “Most university students wore kurtas over their jeans and Kolhapuri chappals, and carried cloth sling-bags called ‘jholas.’ That was the ‘look,’ and the hand-spun style served the Delhi-born teenagers of post-Independent India very well.”

Retail, however, remained a small part of Fabindia’s business until the mid to late 1990s, when William Bissell took over the company from his father, who died in 1998, and moved aggressively to transform the company from an export house into a national brand, driven by the growing purchasing power of the Indian consumer. Many of John Bissell’s international buyers had begun to go directly to local producers, cutting Fabindia out, and William decided the company’s future lay inside the country.

“From 1960 to 1999 our primary business was exports,” William Bissell said. “We started changing our business to being domestic-focused in the late 1990s, and the past 10 years have been a journey, opening lots of stores and focusing on the retail part of the business.

“I saw that the export business was going to be very competitive,” Bissell continued. “The field was really crowded and it was very personalised; I didn’t want to be in a personalised business where it’s all about your relationships [with overseas buyers]. You were dealing with customers who sold your products under their own brand name – I wanted to build a brand.”

The first Fabindia store outside New Delhi opened in 1996 in Bangalore. Now there is not a major metropolitan area in India without one. In 2004, eyeing the large number of Indian expatriates in the UAE, Fabindia opened its first store in Dubai, on Mankhool Road. “The UAE is a real part of what we see as a growing market for Fabindia,” Sabhaney said. This year, a second Dubai store opened on Jumeirah Beach Road, and the company now plans to open outlets in Abu Dhabi and Sharjah.

While the company has grown exponentially under William Bissell, it continues to strive to embody the values of its founder: to provide work for rural artisans whose livelihood depends on finding a market for their goods.

“The philosophy hasn’t really changed,” Bissell said. “We still deal with products that are handcrafted, and we support communities of artisans. But within that broad philosophy, we have developed a number of innovative new ideas.”

“For us, the artisans are not a captive production base,” Sabhaney said. “Our whole approach is to marry our design input with the traditional designs which are already there.” This, above all, is what connects the tiny enterprise founded 50 years ago with the retail giant of today: a mission to bridge the gap between the world of rural Indian artisans and cosmopolitan consumers in India and abroad.

“The gap between the places where these things are produced and where they are sold is huge,” Sabhaney said. “Imagine a person working in rural India, coming from an artisan’s background; he has no clue how the product he is creating is going to be used at the other end. How could he know that there’s a condo in the UAE where someone is going to be using the dhurrie that he’s created in the thatched hut where he lives? Fabindia’s ability is to make this journey happen.” http://www.thenational.ae/lifestyle/house-home/beloved-textile-brand-fabindia-expands-in-the-uae