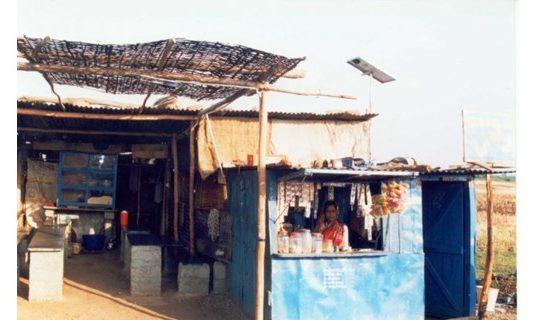 A recent news article discusses Indian solar company, SELCO’s, strategies for distributing affordable solar power in India. The SELCO business model focuses on providing solar lighting systems to low-income Indians through innovative financing options. Annual payments for instance, can be daily, weekly, monthly, or yearly, depending on the needs and abilities of the customer to pay for the solar panels. In addition, household needs and usage are analyzed to determine how much power is actually needed so that a system is appropriate designed. To date, SELCO has distributed its small-scale solar power systems to 120,000 households in India.

On his recent visit to Portland, award-winning solar advocate Harish Hande shared his innovative way of selling solar energy to India’s poor. The first step is asking how much energy a client actually needs.

We’ve seen a lot of discussion in the news lately about whether the U.S. solar industry is in dire straits, and whether the federal government is right to continue offering loan backing to fragile solar start-ups.

As China ramps up subsidies for its domestic solar producers, the market is being flooded with cheap solar panels that are challenging the business models of other solar producers worldwide. Over and over again, I’ve heard “solar power is too expensive.” And that only as prices come down – or subsidies go up – will it be viable.

But there’s a whole other way of making solar power affordable. I learned about it from Haris Hande, co-founder of SELCO India. From Hand’s perspective, solar is actually quite affordable without subsidies. That is, if you reconsider how much you actually need.

By taking a new look at how much power India’s rural population needs and reevaluating financing options, Hande and his company have found a way to deliver small-scale solar systems to 120,000 households – many of which subsist on less than $2 a day.

SELCO India has received more than $1 million in support from the Portland-based Lemelson Foundation. That’s how I heard about Hande’s work and the awards he has won for empowering India’s poor with solar panels.

“The poor don’t have any choice but sustainability,” he said. “But poor people are not concerned with what the environment is like. They’re looking at what life is going to be like.”

So, his company takes a hard look at what life is like for people living without electricity in India – roughly 60 to 70 percent of the population.

A small solar-powered lighting system can provide enough light to milk cows and study after school, enough light to keep working at night or keep a business open a few hours later.

“It’s how you look at solar technology – not just solar panels,” he said. “What does it do for you? What can it power is more important.”

He asks potential customers questions like: Do you need three light bulbs or light in three rooms? How many hours of light do you need? Change your perspective, he says, and solar power can become more affordable.

The best example he gave me – the one that drove home his point in my mind – was the school that wanted to buy a solar system to power 10 computers in its computer lab. The system needed to do that would be way too expensive.

But Hande figured out that the school actually only needed to power 10 computer screens – not 10 computers. Then he asked how much content the school had to go with the computers; how long would they have a reason to use them? It was a useful exercise not only in evaluating whether solar power would be affordable, but also how to make the efficient use of school resources.

“The beauty of solar is it forces you to think about that ecosystem,” he said. “Please don’t look at sustainability as one thing – helping the environment. Don’t tell us solar is too expensive. Sustainability is subsidizing other needs and forcing people to think about efficiency.”

SELCO also looks at a variety of financing methods – would daily, weekly, monthly or annual payments that might make solar panels more affordable.

“Solar is the invention, but it takes a new thought process to bring it to more people,” said Hande. “The financing is as important as the innovation itself.”

Financing solar panels is actually helping poor families build credit and puts them on the road to owning an asset in the larger financial system.

Hande said by getting solar power to the 4 billion people without reliable energy supplies, he and others can create the future market for the technology and grow the industry from the bottom up.

His business is concentrated on India’s rural poor, but I feel like there’s a message here for Americans too – both rich and poor. How might we examine our own lives as Hande examines the lives of his clients? What do we use energy for? How much do we actually need compared with how much we are using? If you have solar panels on your home, I’d love to hear about how you justified the purchase. And if you’ve decided they’re too expensive, how did you come to that conclusion?