An ‘MBA’ For The Bottom Of The Pyramid 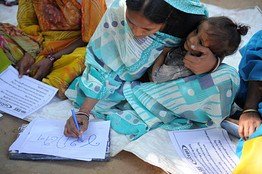 Tamil Nadu based Madura Micro Finance Ltd. is set to provide microbusiness education to women and help with market linkages. The MFI has developed an 18 hour course that is to be administered to women through DVDs and over the phone. It aims to teach women business basics, which the company says is as critical to microloans, if not more, to establishing successful microenterprises. The MFI is also exploring how to create market linkages for the women through information and communication technologies such as mobile voice services.

Tara Thiagarajan, the chairwoman of Tamil Nadu-based Madura Micro Finance Ltd., has been browsing U.S. microfinance blogs in the U.S. and she doesn’t like what she sees.

“The question people are focusing on is not really the right one,” she said.

Even though it’s been over two decades since formal microlenders have existed, Ms. Thiagarajan says it’s still early days to ask, “Does it work?” Instead, now the microfinance industry knows it can manage small loans, it needs to figure out how to get more out of the money it lends, including doing a better job of supporting small businesses and income generation. Madura’s contribution: microbusiness education for the poor and help with market links.“It takes a lot more than money to start something successful,” said Ms. Thiagarajan, “Let’s turn the model on its head. Let’s develop products that will help us assess our borrowers to really decide about who we give money to.”

The microlender is in the process of putting the finishing touches on a “mini MBA” program to offer to their borrowers. The 18-hour course on business basics will be taught via DVD, and students will get a sort of certification for doing that from Madura after they answer a series of questions over the phone. Students will register via mobile phone and attendance is to be taken by a person designated to handle the DVD screening. If someone misses a session, they’ll get phone reminders that they need to make it up. The total cost to each woman: 300 rupees (about $7).

Previously, Madura backed a film that discussed business principles like figuring out what customers want, how to find new markets beyond a particular village and the importance of cutting out middle-men. Ms. Thiagarajan says they’ve been screening the movie to gauge who might be interested in the DVD education program.

About 80 women are going through a pilot version of it right now, and are supposed to finish up next month, after which the microlender plans to scale up.

Separately, the firm is working on ways to improve links between borrowers who have a home-based business and possible buyers. Ms. Thiagarajan said that often borrowers “exist in an ecosystem that has no access to markets.” “You take a Harvard Business School grad to a village with no bus and no cellphone and see what business they’re going to start,” she said.

One idea they’re working on is mobile phone voice messages about wares their members are offering.Madura’s efforts come as microfinance in India has been going through both a regulatory and an existential crisis. The southern Indian state where it took off introduced strict regulations on collection practices and a cap on interest rates last year after some borrowers complained of harrassment. India may eventually introduce national regulations but it hasn’t done so yet. At the same time, the industry is suffering doubts about whether and how it can help reduce poverty as it was billed to do.

Ms. Thiagarajan says the industry should still aim for that—and not become mainly a cheaper alternative to local moneylenders for loans for consumption.

“You still want to look at ways in which you can actually have an improvement in livelihood,” she said. “There’s a limited amount of money in the system. Where finance has been the most successful is when it can direct money to areas that can be more productive with it.”

Madura, which grew out of a microlending organization started by Ms. Thiagarajan’s banker grandfather, has 400,000 members in its self-help borrowing groups and a loan portfolio of two billion rupees ($44 million).