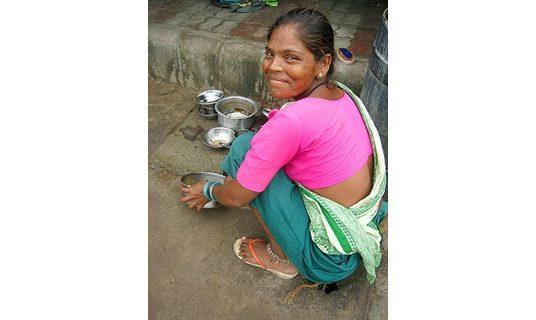 A South Indian entrepreneur, Arunachalam Muruganatham, has created the world’s first low-cost machine to produce sanitary towels for low-income women. Having won an IIT-Chennai award for the best innovation to better society in 2006 and an Indian presidential award for innovation, Muruganatham started Jayaashree Industries, which has manufactured and installed 600 machines across 23 states. He has also developed a marketing and distribution network through which he connects machine operators, low-income women distributors, and low-income consumers. Muruganatham’s machine has had an environmental and socioeconomic impact through employment creation and the distribution of sanitary solutions for women. One Indian social entrepreneur has given women from low income groups in India dignity, by making it possible for them to afford to buy sanitary towels and provide them with an income at the same time. Arunachalam Muruganantham is the person who changed things. From a poor background in the South of India, he created the world’s first low-cost machine to produce sanitary towels. According to a report by market research group AC Nielsen, “Sanitary Protection: Every Woman’s Health Right”, 88% of women in India are driven to use ashes, newspapers, sand husks and dried leaves during their periods. As a result of these unhygienic practices, more than 70% of women suffer from reproductive tract infections, increasing the risk of contracting associated cancers.

Muruganantham’s research into sanitary towels as a social entrepreneur began when saw his wife using filthy rags as it was her only option between buying towels for herself or buying milk for the family. It was then that Muruganantham decided to create a low-cost towel for his wife. He presented his ‘creations’ to his wife, but she, along with other female family members, refused to discuss it with him. So, with no women wanting to discuss his handmade sanitary towels, Muruganantham tested it himself by collecting goat’s blood from a butcher shop; he wore a bladder-tube contraption and women’s underwear for a week. Unsatisfactory results prompted him to try another approach. His breakthrough came at the end of two years of testing different materials.

Muruganantham re-engineered a sanitary machine, and in 2006 it won the award for the best innovation for the betterment of society from the Indian Institute of Technology, Chennai. Plus, he also received an Indian presidential award for innovation. Currently more than 600 machines made by his start-up company, Jayaashree Industries, are installed across 23 states in India. This social entrepreneur sells the 1,600 machines directly to rural women through the support of bank loans and not-for-profit organisations. A machine operator can learn the entire towel-making process in three hours and then employ three others to help with processing and distribution.

A basic machine produces 1,000 sanitary towels a day while the pneumatic device has an output of 3,000. Women pack around six to eight towels in a packet and sell them for as little as 13 rupees (16p). On average, each woman earns the equivalent of 30 to 65 a month; in comparison, farm workers earn between 35p and 85p a day! This system is based on a social entrepreneur structure of woman-to-woman where women making the towels spread awareness of the product, helping others to start using this hygienic way.

Muruganantham says, “Setting-up 100,000 units will generate employment for one million women. No one is bothered about uneducated and illiterate people. Through this model, they can live with dignity.” His hard work has paid off, not only changing lives but saving them, too. Impressively, in spite of numerous offers, this social entrepreneur refuses to sell his innovation to the corporate world.